Article links to another movie-heavy issue of bc magazine 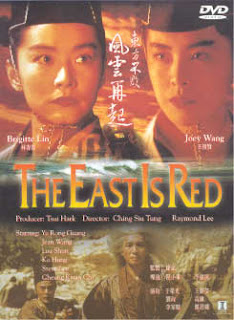 Just one of the many movies -- and plays --
scripted by one of the people I interviewed
for this current issue of bc magazine!
Weird as it may sound, pretty much on each of my visits to Hong Kong as a film fan, I would make it a point to get hold of copies of bc magazine (as well as its long-time rival, that whose title has the initials "hk" in it). Since a few of these trips were for the Hong Kong International Film Festival -- this year's edition of which begins this Sunday, March 16th -- I would on occasion find myself checking out bc's Golden Durian Awards write-up.

So it's with a bit of a strange feeling to find myself announcing this year that some of these were awarded as well as their write ups produced by me. And for those who don't know what these are, I'll direct you to the first article link on the following list:-

i) The 6th Annual Golden Durians Awards -- written, for the record here (even if not acknowledged as such in the magazine), by James Marsh and myself, with input from Rachel Mok and Stefan S.;

vi) Review of Horton Hears a Who!;

vii) Review of Fatal Move; and

viii) This issue's Editor's Diary (of events to check out).

Having just read the Durian awards I think Being Daniel Wu award should have gone to Shawn Yue :)

Why did you think this? For my part, reckon that, if anything, Shawn Yue should get the In Danger of Being Overexposed Award. Especially now with Edison Chen out of the picture, it seems like he's getting the lion's share of young male star roles.

Being Daniel Wu award. That's funny. Seems like Wu didn't do that many movies in 2007 did he?

My durian would have to go to Tony Leung Ka-Fai who is doing too many heavy/villain roles now -- he was great in Election but he needs to do something lighter where he doesn't play the bad father/etc.

Agreed on the waste of talent that was Blood Brothers. Tremendous disappointment even with Shu Qi looking great.

You've done so many pieces now on people who've worked with Brigitte, that it's only a matter of time before you somehow end up interviewing the goddess herself.

I think that would deserve its own special issue of the magazine, would it not?

I saw Fatal Contact but remember nothing beyond the mix of bathos/melodrama and violence. I have higher hopes for Fatal Move.

I think the essential difference is that films like those and Invisible Target and SPL are good action films but remain somewhat laughable and over-the-top in other regards.

While films like To's don't seem as laughable or over-the-top even when the violence gets a bit heavy.

I find myself watching those films a different way while still enjoying *all* the kinds of films I've just mentioned, if that makes any sense.

You're right. Daniel Wu wasn't in that many movies in 2007. (Off the top of my head, I can only think of "Protege" and "Blood Brothers" -- in which Hsu Chi may have looked great but omigod re her terrible singing!!!) I think he's now an established star and considered too pricey as well as feels able to be more selective with regards to his roles than before.

Re interviewing Brigitte: I don't that will ever happen, not least because she's now retired, etc. Also, I fear that if I were to ever meet her, never mind attempt to interview her, I might die of heart attack or heart failure! OTOH, must say that I enjoyed managing to get in references -- however indirectly -- to Brigitte movies in FOUR different articles in this issue... ;b

Re "Fatal Move": I laughed a lot while watching it but it was fun rather than derisive laughter. And yes, weird but true, over the top action can prompt me into that kind of laughter! :D

Baseball isn't a word or sport I"d associate with Hong Kong. Your interview with Laurence Lau and Scud was very interesting and I look forward to seeing the movie.

Glad you found my interview with Laurence Lau and Scud interesting. I did too! :)

And Tony should not be in any Durian awards! Especially on the account of showing "points".

You're right: Shawn Yue is indeed being as ubiquitous as Daniel Wu. And heheh re your Tony comment! ;b