For many people around the world, this past weekend was a special weekend due to Easter falling on Sunday. For my part, must admit that this past weekend was all the more special because it allowed me to get in some film fest-ing and socializing as well as rest and just plain time to decompress and enjoy being in Hong Kong. And among the highlights was being in the press pen -- and consequently, having a privileged vantage point -- for the Red Carpet Event that preceded the World Premiere screening of renaissance woman Sylvia Chang's latest directorial and co-scripted cinematic offering, Run Papa Run as well as being able to attend the screening of the film itself... 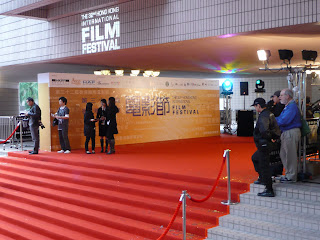 Relative quiet before the stars appear --
though if you look closely, the guy on the far left of the picture
is none other than ace photographer Jupiter Wong
while the fellow in bright blue on the right
is film expert David Bordwell ;) 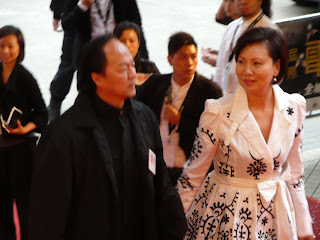 The great Ti Lung and wife Amy To
(As an aside, I learnt that the stars walk really fast
up the carpet and so, unfortunately, my photo of them
is not as clear as I would have liked... ;S) 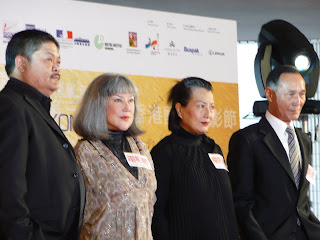 From left to right:
Lam Suet, Shaw Yin Yin, Nora Miao and Michael Chan --
all of whom also have supporting roles in Run Papa Run 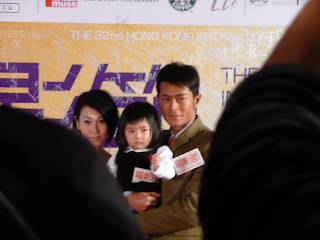 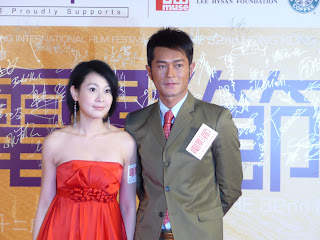 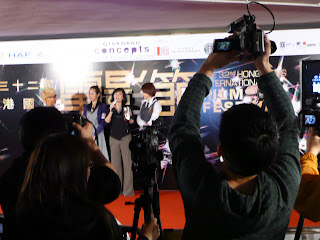 Some other members of the press in action 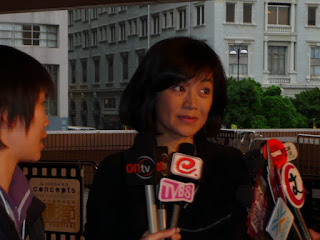 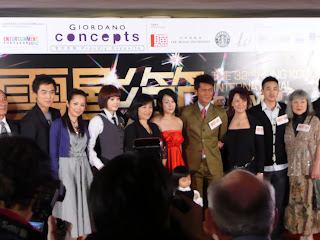 Thanks for the pics and pls keep them up!


I love Sylvia and Rene :) and Louis doesn't really hurt (but he looked like a wax figure in the picture)

I agree with Eliza; Ti Lung takes the cake (even a bit blurry).

And Sylvia Chang and Louis Koo as well!

So, how was the film?

Thanks for continuing to check the blog. Re the pics: Have at least one more set that I want to share but am not sure how much there will be after that as, alas, I have to go back to work tomorrow so my HKIFF-ing will be rather curtailed.

And hahaha re your idea that Louis looks like a wax picture. For my part, was glad he didn't move much since it made it easier to take pictures of him! :)

Some months back, I actually got to speak to Ti Lung at another film-related event. Very gentlemanly -- and statesmanlike -- though, surprisingly, not as tall as I had imagined that he would be. And maybe too modest for his own good. (He declined to be interviewed, saying that it was time the spotlight/torch was passed to the next generation.) But, of course, I was left in awe... :)

As for Sylvia Chang: She looks great. Hope she gets back in front of the camera before too long. Re "Run Papa Run": Er... maybe my expectations were too high due to it being a Sylvia Chang movie. So best to keep your expectations low re it... ;S

Ti Lung is 'to die for', Sylvia Chang looks so gorgeous. Both look much sexier than the younger generation!

What a thrill to see them in person.

Some more will be forthcoming but will have to wait a day or two as I've got a premiere to go to later this evening and there's another HKIFF screening I want to check out on Wednesday evening!

Ti Lung is looking craggy, to my mind, even if in a Mount Rushmore kind of way. Sylvia Chang OTOH... really, she should be appearing in movies, not just directing them!

I can understand Ti Lung wanting to avoid the lime light but it may not be just due to his modesty since I heard from another friend -who is also HK based- that along with being an iconic HK actor he also happens to be a big triad figure (of course it is just hearsay and I'm hoping, harmless gossip)

Well, Ti Lung is back in the limelight in that he -- and his wife and his son -- are all in Sylvia Chang's "Run Papa Run". Also, I too have heard the rumor about his being a Triad but at the same time, have heard people -- e.g., someone who went to school with Ti Lung's son -- who deny that that could be the case and chalk those rumors down to his tending to get called "Lung Ko" (Older brother Dragon) in a way that is meant to be respectful but can sound intimidating as well and, also, his having an air/aura about him that can make him quite the intimidating figure.

Sylvia Chang--wow! As gorgeous as ever.

Rene Liu and Louis Koo, again? Oh!! I am looking forward to watching it (because Koo is staring!). Heehee (= I was attending the Press Conference for "Happy Birthday" in KL (during my internship), but Koo did not look so friendly then. I wonder why....

Raise up your ISO and you'll get clearer pics.

Actually, I reckon that Sylvia Chang looks better the older she gets! (Two others who are like this: Maggie Cheung Man Yuk and Michelle Yeoh.) :b

Yep, Rene Liu and Louis Koo together again. As for the KL press conference thang: Hmmm, maybe he's more at ease in a place he's more familiar with?

Thanks for the tip. To be honest, still am at the learner stage with the new camera and with taking pictures in conditions requiring a flash! But after reading what you wrote, I did go take another look at the camera's manual and noticed that it's got an "intelligent ISO" function that maybe I should utilize... ;b

I like Sylvia Cheng and Rene Liu too. These two can really "act." They both were very effective in 20:30:40.

Agree with you re both of Sylvia Chang and Rene Liu being very good actresses. Re the latter: She'd get my vote for Best Actress in Hong Kong movies last year for her part in "Kidnap", a film that's only watchable in large part because of her being in it.