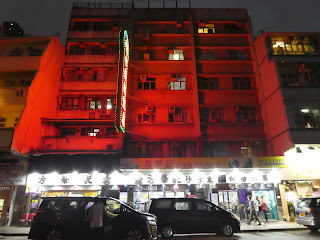 A place that looks like it could figure in a horror movie
but actually was in a Hong Kong crime drama ;D 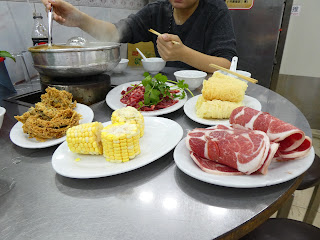 The restaurant which occupies the street level space
of those three tong lau is a hotpot specialist ;b 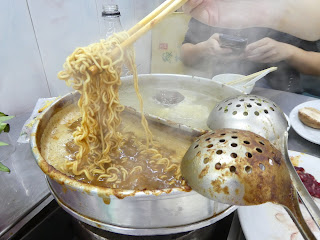 And it's customary to finish a meal at this restaurant with
instant noodles cooked in the eatery's signature satay sauce soup! :O
As regular readers of this blog will know, I'm a film fan whose love of Hong Kong cinema can approach geek levels.  I'm also am a bit of a foodie.  And when I have managed to combine both these passions (by doing such as eating something I got to wanting to try after seeing it featured in a movie -- like in the case of fugu shirako -- or by dining at an eatery which served as a movie location), the experiences are often pretty special to my mind.

So when a fellow Hong Kong movie fan friend told me the identity of the hotpot restaurant which figures in the opening scenes of Johnnie To's PTU and of its continued existence (something which can't be assumed -- since so many famous eateries cum movie locations, such as the restaurant associated with Wong Kar Wai's In the Mood of Love are no more), I immediately contacted a few friends to see if they were up for going there some time.  (A note for those who are wondering: There are eateries where I'm perfectly happy to dine alone but when it comes to hotpot restaurants, one needs dining companions to properly enjoy eating at the place!)

The Fung Wing Kee Hotpot Restaurant was heaving with customers the night that two friends and I made it out to that Kowloon City dining establishment, so I'm really glad that we pre-booked our table a couple of weeks in advance.  Famed in real life for its satay sauce soup option (with the thing to do being to end a meal there with instant noodles dipped in that salty brown brew!), it's pretty old school in terms of its culinary offerings and also its atmosphere -- and thus not for everyone, particularly those with more refined tastes and tendencies!

If truth be told, my two friends -- one of whom is a fellow film fan cum foodie, the other far more of a foodie than film fan -- whom I went there with were not too impressed with the food on offer  In particular, we all didn't care much for the beef that was supposed to be the restaurant's forte -- and it was rather disappointing that the most expensive dish we ordered also turned out to be one that we ended up not feeling like finishing since the meat turned out to be tougher than we had expected as well as hoped would be the case.
On a more positive note: we did find the seafood we ordered surprisingly fresh and tasty, and the vegetable options were respectable.  Still, what made me happiest over the course of our dinner at Fung Wing Kee Hotpot Restaurant was -- you guessed it! --  was the "It's like I'm in a Hong Kong movie!" feeling that the place gave me -- and not just because it's an actual famous movie location but also because it's the kind of old school place that Hong Kong movies made me nostalgic for even though I actually have spent most of my life outside of the Big Lychee! ;b
Posted by YTSL at 4:35 PM