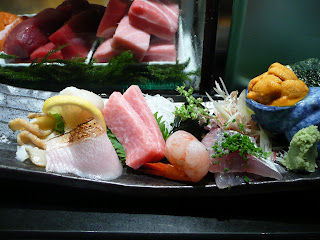 Feast your eyes on this sumptuous
sashimi starter selection! :b 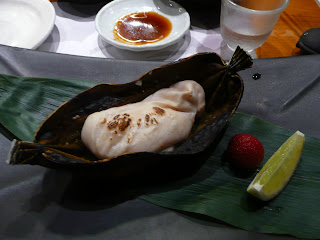 The main event: grilled fugu milt (sperm)
in all of its delicious glory! ;b
Three years ago, I made the first of my now annual visits to Sushi Kuu for an omakase (trans. chef's choice) dinner with people including my über foodie friend. Because she and I both had gotten a great urge to try eating grilled fugu sperm after watching Yojiro Takita's Departures, she had called ahead and asked her friend, the head chef, to check to see if this particular delicacy was in season. To our delight, he had indicated that this was so. So imagine our disappointment when we arrived for dinner on the appointed evening to be told that there was no blowfish sperm to be had at our meal!

As it turned out however, that evening's feast was superb enough even minus the sought after fugu shirako -- and so much so, in fact, that I was moved to declare later that it was the best meal I had in 2010! So, even without counting the fact that chef Satoru Mukogawa had nicely included a serving of cod sperm into our meal as consolation for there being no fugu sperm on the night, I resolved to return the next year for another try.

A little less than one year later, my über foodie friend and I returned to Sushi Kuu. This time around, there was fugu sperm on the menu... but only fugu sperm tempura and fugu sperm chawanmushi because Satoru-san had decided after checking it out one more time at dinner time that the fugu shirako was not good enough to be eaten grilled! So we were again disappointed by our not yet being able to try the dish we had now craved for some time now even while returning the next year to attempt to finally achieve our culinary ambition.

As it so happened, the first time this year that my über foodie friend went in search of grilled fugu sperm at Sushi Kuu, she got her wish. Although I wish I could say otherwise, I was not with her that evening -- because I had to bow out of that dinner as a result of my nursing a nasty cold. But good friend that she is, she promised that she would return there with me when I got over my cold and could properly taste and enjoy my food again.

So I am very happy to be able to announce that this past Wednesday, while seated in between her and another good friend, my big night finally arrived! And no, it really was not an anticlimactic experience at all to finally partake of that which I found to be amazingly rich and creamy tasting -- and truly decadently delicious. Also, for the record, blowfish sperm really does taste better grilled than as tempura or as part of chawanmushi. (And speaking of chawanmushi -- we also had a fantastic chawanmushi concoction that evening; one that was topped with sea urchin roe and what may well be finely chopped up truffles!)

All in all, this was another incredible meal at Sushi Kuu for me. But I have to admit that this time around, my memory of dinner will be bitter-sweet. Lest there be any doubt, the bitter/sad bit has nothing to do with the excellent food but, rather, is the result of this dinner having been my final meal with a very good friend who will shortly be leaving Hong Kong for Toronto where a better -- and better paying too! -- job awaits. As I have already told her, I will miss her a lot. At the same time, I really do have lots of great memories of good times spent together -- including, now, a wonderful dinner where I -- at long last! -- finally achieved one of my foodie ambitions!! :)

Strange... that CNN Go piece makes it sound like a new thing but I knew about Eva Air and its Hello Kitty planes a long time ago!

Hi, YTSL! I'm just getting caught up on my blog reading after a couple of hectic weeks. As always, it is a pleasure to see all your photos and read what you have to say.

I am very happy for you that you finally got to try the grilled blowfish sperm, and even happier that it did not disappoint! Now I find myself wondering if there is some other delicacy out there that you have yet to try, but really, really want to!

At last -- a bona fide comment on this entry! :D

Re other delicacies that I'd love to try but haven't yet done so: like the blowfish sperm, they're the result of watching them in movies -- corn tempura (from "Still Walking", a Japanese film that came out the same year as "Departures" and which I actually think is better), and fried green tomatoes (from the movie based on the Fannie Flagg book)! Also, Linda Fairstein books make me want to try lobster rolls... ;b

I love that the other foods you want to try are also from movies. It makes me want to make a sort of movie/menu pairing post! (But I need to focus on work. I have a poster to make for a conference next week.) It would be fun to see what menu you'd pair with movies, though!

Yes, well re the movie connection. What can I say other than yes, I'm a movie geek as well as foodie! ;b

What a fabulous foodie story! I've never even heard of blowfish sperm, and wonder how they even "harvest" it...

Of course Chinese cuisine is famous for leaving nothing animate uneaten, and I am delighted to hear you actually thought blowfish sperm is so delicious!

I'm not sure how they "harvest" it but I've had crab, prawn and other fish sperm too. With Shanghai crab, they like to talk about male roe. Uh huh... ;b