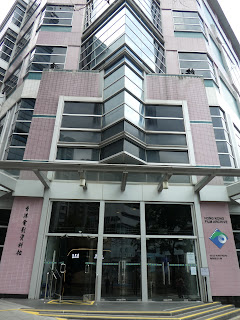 A place where I've watched many an old (Hong Kong) movie! ;b


Long before I got the tickets for the 2019 Hong Kong International Film Festival went on sale (or, actually, before this year's film fest program had been announced), I had already got my ticket for the screening at the Hong Kong Film Archive that I went to midway through my HKIFF-ing.  A Mysterious Weapon isn't the kind of movie that I can envision the HKIFF's programmers screening at the fest any time soon -- and is so obscure that it doesn't appear to have merited an IMDB entry.  Nonetheless, I did think that it would be worth some one and a half hours of my time.  And quite a few others evidently agreed since, as it so happened, it attracted an audience that was larger than those at many of the HKIFF screenings I attended this year.

A historical martial arts movie from 1969, A Mysterious Weapon stars Suet Nei as a kung fu expert whose specialty weapon is her "iron hair", which she wields like a whip against attempted rapists as well as opponents she goes up against over the course of doing such as rescuing men and women alike.  Going to the aid of a handsome fellow (Paul Chun Pui) being pursued by a bunch of other, weapon-brandishing men one day, she discovers that he's her sworn brother and learns the story of how he has been falsely accused of attacking his boss as well as seducing the older man's daughter under false pretences.

Although it's pretty quickly obvious to A Mysterious Weapon's audience who the villain of the piece is (not least because he's played by Shek Kin, an actor almost invariably accused as the bad guy in movies in which he appeared, including Enter the Dragon), it's less so to many of the characters in the film, including the "young master" (Kenneth Tsang) who is the heir apparent of the man now feared to be on his death bed.  One reason for this is that the old patriarch was attacked with a cicada-shaped dart that is the trademark weapon of the character played by Paul Chun Pui -- and, incidentally, also the titular mysterious weapon of the film (rather than, as I had thought earlier, Suet Nei's character's "iron hair").


With individuals having cicada-shaped darts and "iron hair" as their weapons of choice, it never was going to be easy to look upon A Mysterious Weapon as a serious martial arts movie -- and, if truth be told, I couldn't label it a very good film.  The fact of the matter too is that it wasn't made with the biggest of budgets.  In addition, I sometimes get the feeling that the film was made in such a hurry that its makers ended up overlooking -- and hoping its audience wouldn't notice -- such as the appearance of a trigonometric station on one side of an outdoor scene shot in the Hong Kong countryside!


At the same time though, I do think it's an entertaining offering with some nifty creative touches in such as its plotting and costume details.  I also have to admit to thoroughly enjoying seeing a movie featuring a formidable fighting female character.  For those who didn't know, the preponderance of "kick ass women" in Hong Kong cinema was one of the things that led me to become a Hong Kong movie fan(atic); and I continue to find it pretty amazing and cool that there were so many of them in Hong Kong films as old as this now five decade old work!

My rating for this film (based on large part on its entertainment value): 7.0
Posted by YTSL at 8:36 PM