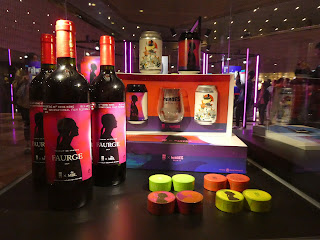 In 2011, two college students decided to move from Bashar al-Asaad-controlled Damascus to rebel-controlled Douma to take part in the still-ongoing Syrian Revolution.  Over the course of some four years, one of them, Saeed Al Batal, and his friends shot more than 450 hours of film footage documenting conflict, death and life in parts of the country under siege.  Mixed in too into what was ultimately edited into a 123-minute-length work were scenes shot in the Syrian capital -- in such as art studios and at a pool party -- which would normally seem commonplace but seemed rather surreal when viewed within the context of what else was shown going on in the same country at the time.

Going into a screening of Still Recording, I expected the documentary effort to be a tough watch -- and it did indeed turn out to be the case, but for different reasons than what I thought would be so.  For, yes, I was emotionally affected by the shots of people killed in the conflicts, many of them non-combatants, and their mass burials -- but I also felt physically ill after being exposed to so many real-life equivalents of "shaky cam" shots and not only had to close my eyes for extended periods during the film but also ended up downing some Ibuprofen seconds after the conclusion of its screening.

At the risk of sounding callous (not least since at least one person behind a camera lost his life over the course of the making of the work along with 13 other individuals known to the documentary's makers), I honestly thought that much of Still Recording was badly shot -- and got to wondering how terrible the discarded hours of recorded footage were in view of what passed muster to be included in the film.  In addition, the way that this guerilla documentary was put together made it so that confusion along with a sense of there having been so much tragic waste (of, but also in, people's lives) seems to be the key takeaway for a viewer like me (who was sincerely hoping for greater enlightenment about the Syrian conflict than this production provided me with).

Something else that I found out of note in Still Recording was how more socially liberal the Ba'athist-controlled parts of the country away from the main conflicts appeared to be.  Some might consider the scenes of partying young women and men in bathing suits drinking alcohol -- and having fun while parts of the country burnt -- to be decadent and indulgent.  But I have a feeling that many of these same people also would be disturbed by the religious fervor of the rebels that can be seen not only in their constant invocations of "Allah" in battle but also at other times, the more conservative clothing of their womenfolk (none of whom, more than incidentally, are shown as active participants in the conflict) and their destruction of hundreds of bottles of alcohol that one of the rebels can later be heard lamenting as a waste off camera!

The Hong Kong Cultural Centre's over 1,700-capacity Grand Theatre is my favorite film viewing venue in Hong Kong; with memorable viewing experiences there including those for Lawrence of Arabia and Doctor Zhivago.  So it was rather disappointing to discover that I'd only be attending one HKIFF screening there this year.  Still, if I had to pick one film from this year's HKIFF viewing selection to do so on a mega-big screen with more than a thousand other appreciative audience members, then the visually astounding Free Solo really would have been it!

Elizabeth Chai Vasarhelyi and Jimmy Chin deserve credit for taking the time and effort to show the often amusing as well as interesting human side of professional rock climber Alex Honnold.  Still, there's no doubt that Free Solo soars highest when documenting the free solo enthusiast's superhuman attempt(s) to climb a 3,000 foot vertical rock formation known as El Capitan without ropes or other safety gear.

There's no question about it: Alex Honnold is the star of this amazing show -- with his girlfriend Sanni McCandless often not coming off that screen, to the extent that many members of the audience probably were willing for him to dump her way before the end of the film!  At the same time though, it also should be recognized that the makers of Free Solo -- notably its camera crew -- really did do a great job too.  Visually stunning, beautiful and spectacular, this deserved Academy Award-winning documentary also has a good amount of dramatic tension, with many of its most suspenseful sections causing my palms to sweat (truly!), and the very audible collective gasps of shock, surprise and relief emanating from the audience at various parts of the screening making the viewing of this film an incredibly enjoyable film fest experience.