An urban park that I've grown to like a lot, maybe even love ;b 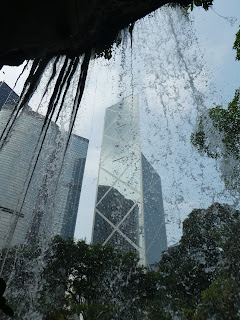 View from a cool section of Hong Kong Park 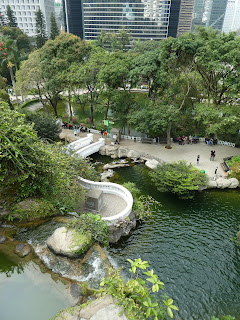 A veritable oasis in Admiralty :)


When I was a tourist to Hong Kong -- rather than the permanent resident that I now am -- I never thought to go and visit Hong Kong Park.  And for more than a year after I moved to this part of the world, I didn't set foot even once in this spacious urban park in Admiralty whose wonders aren't all that visible when you're outside of it.

Slowly but surely though, this well-planned public space has come to occupy a place in my heart.  And it's not just the special facilities such as its walk-through aviary or 1,400 square meter conservatory that I've found myself repeatedly returning to visit.  Rather, I've also come to seriously appreciate how relaxing it can be to walk along its paths that take one close to ponds full of lotus plants, tortoises, koi and frogs (the last of which are often heard but not as often spotted) and waterfalls that may be artificial in nature, yet whose sights and sounds can have the kind of calming effect on me that I get when I hike in the more natural environs of Hong Kong's country parks.


So much have I come to like -- and maybe love might not be too strong a word! -- Hong Kong Park that I now have taken to taking friends and other folks visiting the Big Lychee to this urban oasis, particularly those unable -- due to time constraints or some other factor -- from spending time in the territory's country parks.  Almost without fail, it's proven to be a hit with the visitors; and this especially with those individuals who have been in Hong Kong for a few days and had rushed themselves off their feet trying to adjust to the quick pace of life here as well as felt stressed by the crowd density in the parts of the territory that tourists and people here for a conference or other type of business trip usually stay within.

For my part, there's one additional reason why Hong Kong Park feels special: that is, certain areas recognizably served as filming locations for movies that I've seen and liked, including Dante Lam's The Beast Stalker (which was my second favorite Hong Kong movie of 2008).  So, there are times when I feel like I'm in a movie while I'm in the park -- and perhaps none more so than on my recent visit there last month when a friend and I got to belatedly realizing that acting legend Lisa Lu was right behind as as we made our way to the branch of the Lock Cha Tea House located within Hong Kong Park and, as we sipped tea and chatted in one corner of the facility, filmed what appeared to be a TV interview in another section of the establishment! ;b
Posted by YTSL at 11:32 PM

It does look like a wonderful place.
Coffee is on

In this case, looks do not deceive! :)