Eating Women contains both a number of sex scenes and scenes of women eating! (Film review) 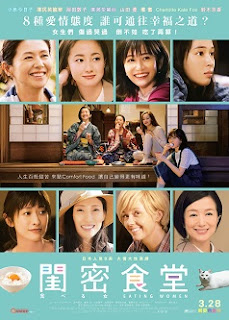 Hong Kong poster for a Japanese movie
Eating Women (Japan, 2018)
- Jiro Shono, director
- Starring: Kyoko Koizumi, Atsuko Maeda, Erika Sawajiri, Charlotte Kate Fox, Kyoka Suzuki, Alice Hirose, Mitsu Dan, Yu Yamada, etc.
Be honest now: what came to mind when you saw the title of this Japanese film?  If it was something rather naughty and/or erotic, you wouldn't be entirely wrong with regards to the subject of this movie.  Because even though Eating Women's Hong Kong poster emphasizes its foodie and female bonding elements, it's not for nothing that this actually rather delectable Japanese offering got a Category IIB (Not suitable for young persons and children) rating from the Hong Kong censors!
Eating Women begins with a innocent scene featuring two young girls (Kotone Uda and Yuna Suzuki) lying down on a quiet road in a bid to hear the gurgling of an underground river whose existence one of the two friends' mothers (Mitsu Dan) had talked about.  Intrigued by their actions, an older female decides to follow suit -- with her actions showing her to be a rather eccentric individual.
The owner of a food-themed bookstore which occupies space in a rambling building which also is her home, Atsuko Motchisuki (Kyoko Koizumi) is a spinster with a cat but also a good number of female friends with whom she regularly gets together to cook, eat, drink and talk about subjects that include their love lives.  At the instigation of her restauranter friend Mifuyu (Kyoka Suzuki), she additionally ends up taking in as a boarder a young American woman whose husband (Hiroyuki Ikeuchi) divorced her in part because of his being tired of her not being able to cook proper (Japanese) meals for him!
In an early scene, Lisa Matilda (Charlotte Kate Fox) is shown effectively being raped by her then husband.  It's a shocking scene for its contrast with what had come before in the movie.  At the same time though, it effectively serves notice that Eating Women does have sex scenes -- including far more pleasing (and at times amusing) ones that show the female party being pleasured -- as well as a number of mouth-watering scenes involving women enjoying consuming a variety of foods!
Adding to the diversity of this film's subject matter is that its story involves sub-plots involving eight different women.  If truth be told, some of them are far more memorable as well as interesting than the others -- and I also must admit to having difficulty telling a couple of the younger women apart!  So I actually do reckon that Eating Women would have benefited from a paring down of the number of characters that have stories to tell but I wouldn't be surprised if scriptwriter Tomomi Tsutui, who was charged with adapting her novel for this 104-minute-long cinematic production, baulked at doing precisely this.
Incidentally, Eating Women's main character, Atsuko, spends a significant amount of time in the movie in front of her computer trying to complete a book that details the lives of her friends.  Is this a case of art imitating life here?  If so, Tomomi Tsutui sure does have some interesting and diverse friends based on such as their occupations alone since this film's female characters include an ear model, a TV assistant producer and a books editor.  Also worth noting is that none of the female characters in this ensemble dramedy is married for any significant amount of the movie; something that's still not all that usual in Japanese cinematic offerings but, at the same point, looks to be reflective of Japanese films being increasingly likely to present portraits of Japanese individuals and families that don't fit the conventional images of yore.
My rating for this film: 7.5
Posted by YTSL at 10:22 PM