A political documentary about the contemporary U.S.A. and another on Vladimir Putin (Film reviews) 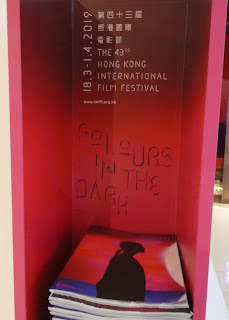 
Seven days ago and four films ago, I viewed Michael Moore's Fahrenheit 11/9.  Prior to doing so, I had worried a bit that I'd fall asleep during its screening as it'd be my third at the Hong Kong International Film Festival that day.  Looking back, in doing so, I had forgotten the maverick documentary filmmaker's ability to entertain and evoking strong emotional reactions as well as inform and educate.


There's no question that the subjects that Fahrenheit 11/9 examines and the issues addressed in it are pretty serious ones.  We're talking, after all, of topics including money-driven elections, political corruption, gun control (or, rather, the lack of), lead poisoning, voter apathy, striking teachers and the rise of White nationalism.  At the same time, Michael Moore proceeds to present them in a film with segments that can -- and did -- make people smile, snigger and laugh out loud several times over the course of this two hour work (in addition to frown, groan and want to cry with frustration at other points during the screening).


If truth be told, I'm not sure if many of my (liberal-leaning) American friends would react in the same manner to such as the opening scenes of this documentary that showed the widespread assumption prior to Donald Trump's shock win on November 9th, 2016, that Hillary Clinton would be elected President of the United States of America.  And therein might explain why it is that this documentary is among Michael Moore's lowest grossing films ever: for even while it's clear enough that the filmmaker is no fan of Donald Trump, it's readily apparent right from the first few minutes of this offering that he's got far more targets than just the man who is the USA's 45th president, and that they actually do include individuals on both sides of the country's political divide.


Also impressively diverse and varied are the topics that Michael Moore covers in Fahrenheit 11/9 and manages to weave together in a masterful polemic about American governance and politics that saw him spending time in places as far flung as Flint, Michigan (his city of birth) and West Virginia as well as Washington, D.C., and New York City.  More interested in understanding and making clear the conditions that led to the rise of Donald Trump and the ideologies he represents than solely throwing vitriol on him and his ilk, this is a film that Americans seeking to prevent their continued dominance would do well to view -- and it's a tragedy that it seems that many of them have, for some reason or other, opted against doing so.


In the late hours of the last day of 1999, as the Russian people were getting ready to ring in a new year, there came an announcement by then President Boris Yeltsin that he would be stepping down from office.  Filmmaker Vitaly Mansky was at home in Moscow with his family when they heard the news -- and, in fact, in the middle of filming them for what presumably was a home video originally intended entirely for private consumption.


Although reports had it that his approval rate was down to a mere two percent at the time, Yeltsin's shock announcement still upset Mansky's wife and the elder of his two young children.  On the other hand, it's not clear if his younger child was more upset with her father following her into the bathroom to continue filming her or the news that they had learnt via watching Yeltsin's 'live' TV appearance while Mansky himself didn't seem unduly perturbed by the news -- and appeared to have no qualms to subsequently take part in the filming of what appeared to be a pretty candid documentary portrait of the new Russian president in his first few months of political office and the lead-up to what turned out to be the first of several electoral victories that has seen him remain as the country's head of state since that fateful day close to 20 years ago now.


Among the things that can't cease to amaze when viewing Putin's Witnesses is how freely Mansky appeared able to film Vladimir Vladimorovich Putin.  (Indeed, in the short time that they appear on film, Mansky's family voiced more objections to having his camera on them than Putin looks to have done!)  Also pretty astounding is how unassuming the man we now know is perfectly comfortable wielding great power and firmly holding on to it appeared -- or, rather, took pains -- to be in early on during his presidency.

A sign of how much things have changed in the intervening years can be seen in Mansky and his family now living in exile (in Latvia) and this film not being listed as a Russian (co-)production despite all of it having been filmed in the country whose head of state its primary subject is.  One reason for this is, as Mansky acknowledged in a post-screening Q&A, Putin appears to have changed so very much from what he had appeared to be like back in 2000.  Also worth noting though is how inadvertently -- and thus chillingly -- revealing the footage he shot back then (which includes that of Yeltsin and Mikhael Gorbachev post retirement and also a room full of then Putin advisors and aides, of whom -- rather disturbingly (and tellingly?) -- only one of them has remained in his political circle) can be close to two decades on.