Musings on a visit to Robben Island 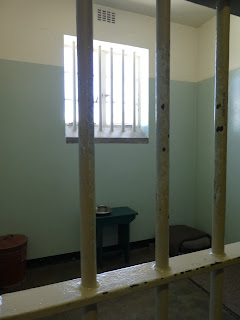 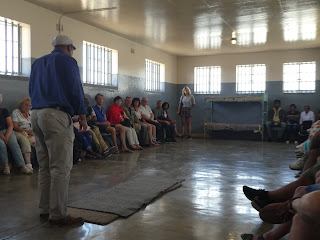 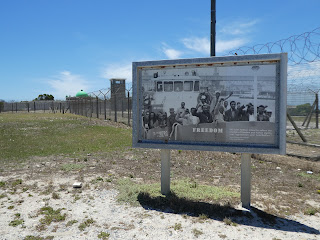 Lest we forget...
When I think of South Africa, I think of Nelson Mandela.  One of the world's very few genuinely great political leaders in recent memory, he's someone I felt -- and, actually, continue to feel, even after his death -- much admiration, respect and affection for.  So it shouldn't come as a surprise that the number one slot on my "must go to while in South Africa" list belonged to the island that was home to the maximum security prison where Madiba spent 18 of his 27 years behind bars as a political prisoner.
Located just 11 kilometers or so from Cape Town, Robben Island is a small, fairly flat and rocky island in Table Bay that's home to more than 130 species of birds (including African penguins!) but doesn't have any trees indigenous to it.  And while generally accessible these days by way of an approximately 30 minute ferry ride from the Nelson Mandela Gateway at the city's Victoria and Alfred waterfront, the ride can be a choppy one even on a fine day due to its waters regularly being subject to rough Atlantic swells.
The usual arrangement these days is to go on an official tour of what's now the Robben Island Museum that includes a bus tour to see various parts of the island (including what's left of a former leper cemetery, the house where Robert Sobukwe was kept in solitary confinement for years, and the limestone quarry where political prisoners were required to work for at least six hours a day) and a guided tour of the former facility where Nelson Mandela and a number of other political prisoners -- including Walter Sisulu, Ahmad Kathrada and Tokyo Sexwale -- were locked up for thousands of days and nights by a former political prisoner.

Something that's made patently clear over the course of the tour is that Robben Island has long housed individuals that ruling regimes felt a need to isolate from the rest of society, for one reason or other.  In the 17th and 18th centuries, the Dutch sent political prisoners from their various colonies (including religious leaders from the former Dutch East Indies (contemporary Indonesia)) there.  In the 19th century, it was the turn of the British: who banished rebellious Xhosa rulers to the island and also established a leper colony on it.  And in the 20th century, the "whites only" government of South Africa set up prisons there, the last of which only closed down in 1996 -- five years after the fall of Apartheid and two years after Nelson Mandela became the country's President.
Inscribed on the UNESCO World Heritage list in 1999, Robben Island is -- like Hiroshima's Genbaku (aka Atomic Bomb) Dome -- a place where there are physical reminders of humanity's ability to inflict much suffering on others, yet also stands to remind us that people can triumph against much adversity and also can have a surprising, almost miraculous, ability for goodwill even for those who some might think would be their natural enemies based on their actions and/or those of their forefathers.
In particular, I can't help but think of Nelson Mandela: imprisoned in a tiny and very spartan cell for years on end, his eyesight damaged by the dust and glare of the sunlight when he labored in the lime quarry, subjected to various humiliations and other psychological stresses as well as physical discomfort, he managed to emerge from a total of 27 years of imprisonment with his sanity, intellect and humanity intact.  As the (white) South African friend I went to visit Robben Island with remarked: "We were very lucky".  As for me: suffice to say that I came away even more impressed by, and in awe of, the greatness of that man.
Posted by YTSL at 11:59 PM

Terrific essay and photographs as usual. Reminded me of Nelson Mandela's appearance in Detroit over 27 years ago. Sold out Tiger Stadium and there weren't any dry eyes that I could see around me when he thanked everyone for their solidarity with him and the struggle of Black people in SA. He was a true hero.

I'm happy to learn that you're still checking out my blog posts. And absolutely re Nelson Mandela being a true hero. Imagine how much better the world would be if more political leaders were as wonderful as him...