A scenic car ride along Chapman's Peak Drive and more! 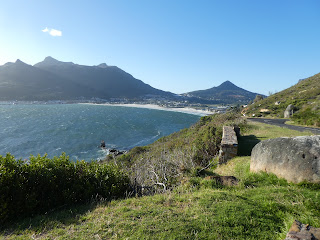 On the Chapman's Peak Drive looking back at Hout Bay 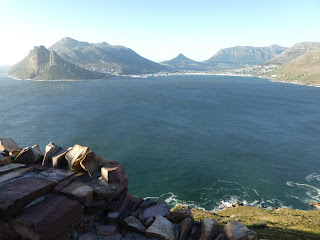 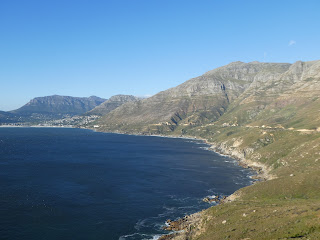 Years ago, while my then regular hiking companion and I were on Hong Kong's Dragon's Back, we heard a fellow hiker exult as to how wonderful it was to be able to gaze down and out at the sea from atop a mountain; whereupon we beamed at each other and recognized, without having to say it out aloud, that it did feel pretty special to be able to have that experience along with those views.


More than once when I was in South Africa, I found myself wishing I could go hiking up a mountain or two.  And while my top choice of mountain to ascend before my visit to that country would have been 1,085-meter-high Table Mountain, I now think that if I ever do return to do some hiking in that part of the world, my first choice peak to hike up would now actually be a less internationally renowned one located just a few kilometers away and is about half its height.


On this visit, I got to know of Chapman's Peak by way of being driven along the winding road carved into one side of this 593-meter-high southerly extension of the mountainous Constantiaberg section of the Cape Peninsula.  And almost needless to say: I'm so glad I wasn't behind the driver's wheel of any vehicle going along this roadway with 114 curves along its nine kilometer length.

For one thing, close to every single one of those bends are on the hair-raising side.  For another, not having to concentrate on driving along them freed me up to enjoy the series of views which unfolded as the car I was in made its way along Chapman's Peak Drive!  And no, it's not hyperbole to state that these range from the splendidly scenic to breathtakingly spectacular -- and provide enough clues as to how absolutely incredible the vistas would be from atop the eponymous peak.

Adding to the wonder of it all is that even before the car got onto Chapman's Peak Drive, I already had felt that I was getting a serious visual treat on this particular car ride for Cape Town to Fish Hoek.  "You haven't got to the scenic part yet," the Capetonians in the car kept on telling me as I oohed and aahed at the sight of such as the beautiful beaches at Clifton and Camp's Bay, the granite formations off Llandudno, the vast expanse of the Atlantic Ocean, whose waves were white tipped that windy afternoon, and the imposing mountain range known as the Twelve Apostles despite their having more than 12 buttresses as we went along Victoria Road!

Having now completed that entire ride, I now feel that I'm entitled to say that they're wrong.  Because the truth of the matter is that pretty much every part of the journey was scenic -- and do I feel ever so privileged and blessed to have been able to view it all! :)
Posted by YTSL at 11:48 PM