Christmas in Hong Kong, with parachuting Santas in particular vogue this year ;b 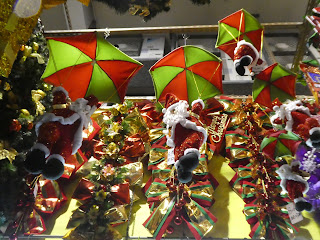 Parachuting Santas look to have been the "in" thing
this Christmas season in Hong Kong! 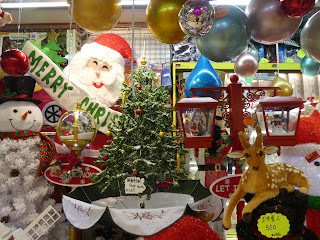 Rest assured though that there's quite the variety available
as far as Chrismas decorations go... ;b 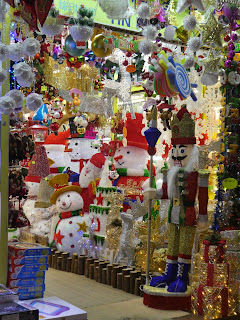 It should be noted though that the seasonal decorations do
focus more on snow than noticeably Christian motifs ;D
This time last year, I played host to two cousins -- one visiting from Singapore; the other from Australia -- and friends of one of them.  When they told me about their plans to come over to Hong Kong, I was actually rather surprised; this not least since this time of the year is when flights to (and out of) the Big Lychee and hotel accomodation here is at their most expensive.
Also, despite the city regularly seeing a big outflow of expats home for the holidays and also locals off on holiday in some other part of the world, there's a big enough inflow of visitors to make it so that tables at the more famous and popular restaurants can be hard to come by.  Consequently, I considered it quite the achievement last year to secure us reservations over the holiday period at eateries such as Mott 32 and The Chairman (the latter of whom's signature crab dish I still find myself thinking about fondly and pining for from time to time).
The thing that I found the most hilarious -- and also greeted with some incredulity -- was that my Melbourne-based cousin had told me that one major reason why he had thought it'd be great to visit Hong Kong this time of the year was so that he could see the Christmas lights.  For one thing, Hong Kong has light shows all year round.  Then there's the fact that the Christmas decorations are installed whole weeks before Christmas in this part of the world.  Indeed, this year, I actually caught sight of them as early as the week after Halloween!
When one considers that there aren't that many Christians in Hong Kong (with the Catholic congregation estimated at 379,000 and the Protestant population at 480,000 in a territory of some 7.3  million people), it's actually pretty amazing how ubiquitous Christmas decorations are in Hong Kong as well as how far in advance before Christmas they get put up.  Or maybe not when one considers that much of what passes for Christmas decorations here tend to be far to do with the birth of Jesus Christ and more to Santa Claus and winter -- so it's probably more accurate to describe the decorations as being festive and seasonal than Christmas ones per se.
Take this year's popular "Parachuting Santas" (which I first caught sight of while wondering around Sham Shui Po early last month), as an example: Honestly, now, what do they have to do with Christmas?  Actually, are parachuting Santas popular anywhere else than Hong Kong?!  I suppose than in a part of the world without chimneys and fireplaces, it makes more sense of Santa Claus getting into homes by parachute rather than down a chimney.  As for Santa Claus' popularity: I can't help but think that his being dressed in red -- a festive and auspicious color as far as ethnic Chinese people are concerned -- has something to do with it... ;b
Posted by YTSL at 11:25 PM