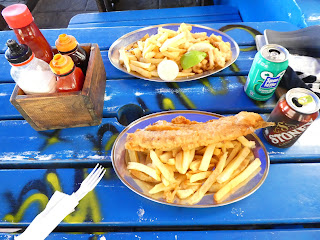 The one seafood meal I had while in South Africa! 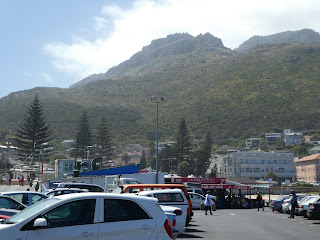 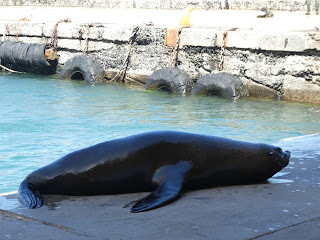 The sea lion that hangs out near the restaurant ;b
"South Africa is not famous for its food," my South African friend warned me prior to my heading over to his home country earlier this month.  But after issuing this caveat, he went on to tell me there are some foods and places that I should try during my visit; with the fish and chips at Kalky's over in the Kalk Bay suburb of Cape Town being at the top of his list.
A casual dining spot located right next to Kalk Bay's working harbor, Kalky's feels wonderfully unpretentious and, also, uncommonly for Cape Town, multi-ethnic as well as multi-generational in terms of its clientele.  When my friend and I were there for lunch, our fellow diners included an elderly white couple at one table and a "Coloured" family with young kids at another -- and I got the distinct impression that everyone one of them were regular patrons of this dining establishment.
Although he had gone on quite a bit about Kalky's fish and chips, my friend ended up ordering fried calamari to go with his chips when we were there even while making sure that I got the classic fried fish and chips!  To be fair though, he did allow me to try some of his portion of what turned out to be some really delicious calamari.  Also, the hake that I ordered -- with my other option being the more exotic and oilier snoek -- actually was pretty outstanding and may, in fact, have been the freshest fish I've had as part of a fish and chips dish ever!
In addition, as strange as it may sound, my favorite part of a fish and chips dish often is the chips rather than the fish.  And so good were the chips at Kalky's -- especially after having copious amounts of malt vinegar and also the sweet chili sauce that I've come to associate with South Africa even while reminding me of Thai sweet chili sauce slathered over them -- that I really would have been happy to have had a chip butty for lunch there!
While the food at Kalky's did leave me pretty happy, I felt at the end of our lunch that something was missing.  The thing is that when he first told me about this iconic dining establishment, my friend had mentioned that sea lion spottings were pretty much part and parcel of the Kalky's experience.  But I didn't see any of this creatures in the area... until we went for a walk around the harbor after lunch and lo and behold, we saw an actual sea lion swimming in the water before coming ashore just a few meters from the restaurant! ;D
Posted by YTSL at 10:32 PM

Sea lion next to a restaurant? This reminds me of that unsuspecting Canadian girl sitting on the pier and getting dragged into the sea.

As it so happens, I was warned not to get too close to the sea lion as it apparently has a temper... To be honest though, I was happy to keep my distance even while also keen to take snaps of it. After all, the reason why I was so excited to spot it is because I knew it's a wild animal...