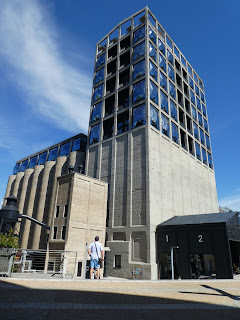 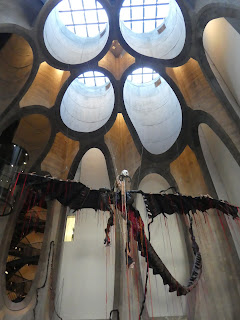 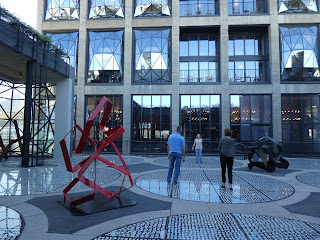 The rooftop sculpture garden is one of the"must visit"
sections of the museum (aka Zeitz MOCAA)
The Victoria and Albert Waterfront in Cape Town is viewed by some people as a top visitor attraction and others as a major -- and over-priced -- tourist trap.  Since it's where the Nelson Mandela Gateway from which one boards the ferry to Robben Island (and one returns post tour) is located, I knew that I'd be spending some time there when in the city.  And as it so happens, this area also is now home to the largest contemporary art museum in Africa, hailed even before it officially opened its doors to the public on September 22nd this year as "Africa's Tate Modern".
Like the modern art branch of the Tate Gallery over in London, Cape Town's apparent answer to it is located in a local landmark that managed to survive years after its original purpose had come to an end.  Whereas the Tate Modern has its home in a former power station, the Zeitz Museum of Contemporary African Art is housed in a former grain silo complex which was the tallest building in Sub-Saharan Africa for the first four decades of its existence.  And even with its sharing several floors of space with a luxury boutique hotel, there's ample room for the expansive display of art works in the previously derelict building whose grand transformation cost more than 500 million South African Rand (~US$37 million at today's conversion rate).
The addition of some 96 large geodesic windows on the top five floors of this largely concrete 1920s structure has glamorized its exterior quite a bit.  But the complex's truly mind-blowing visuals can only be seen after one enters it; starting at the museum multi-storey atrium that's home to Nicholas Hlobo's eye-catching Iimpundulu Zonke Ziyandilandela ("All the Lightning Birds Are After Me", in his native Kixhosa) and whose space feels simultaneous cathedral-like and organic in nature.

There's no two ways about it: as re-created by architect Thomas Heatherwick, the building that houses various artworks is itself a major work of art; and so much so that there is a real danger that the transformed monumental structure could overshadow the paintings, sculptures, photographs, video works and other, physically way smaller creative works on display in its nearly 20,000 square feet of exhibit space.  And, as a matter of fact, I did find myself far less interested in the sculptures installed in the sculpture garden on the top floor of the museum than the design components of that particular space -- and also the views to be had from there.
On the other hand, I found myself mesmerized both by the art installed in the Dusthouse section of the former grain silo complex, Yinka Shonibare's dramatic, operatic Addio del Passato video work, and the cavernous four-storey "found space" where hazardous chaff was filtered from the adjoining industrial structures itself.  Furthermore, there were indeed many instances in which I could clearly see that the curators and exhibit designers had made great use of certain spaces within the museum as well as those where the art on display sucked me into the worlds they depicted and ensured that all of my focus was on them rather than their surroundings.
To sum it all up: The Zeitz MOCAA is a museum where there's so much to be see -- and even be awed by; starting with its architecture but also including a good amount of the works (by, as it turns out, artists from the African Diaspora as well as the African continent itself) on display within the physically impressive complex's 80 white-walled gallery spaces.
Posted by YTSL at 11:36 PM