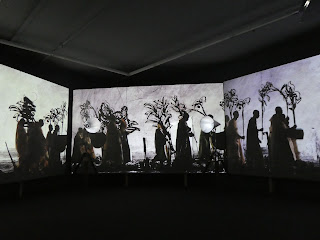 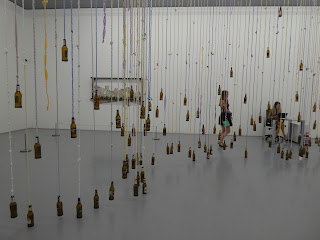 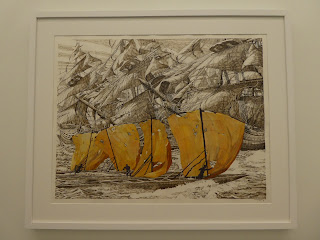 Take a look at, never mind actually pay a visit to, Africa's largest contemporary art museum and it becomes abundantly clear that the Zeitz Museum of Contemporary African Art (aka Zeitz MOCAA) is located with an amazing building that's made all the more so by the makeover given to the former grain silo complex by British architect Thomas Heatherwick.  But what of the art on display within its walls, a good part of which is actually owned by ex-Puma CEO Jochen Zeitz?
While three out of four people I visited the museum with pronounced themselves wholeheartedly impressed, I got the sense that the fourth was less so -- and my own feelings were decidely mixed about what is a pretty diverse collection of art works, many of which appeared to be designed more to provoke and even disturb than to be, well, beautiful.
Some would say that's par for the course with regards to contemporary art.  It's also true enough that: a number of the featured artists at Zeitz MOCAA are clearly still intent on showing that many wrongs that took place over the course of the continent's history have left much of Africa scarred to this day; and the sight of such as nooses and shackled people have an innate, visceral ability to chill and horrify, especially in a land whose history includes the enslavement and killing of tens of thousands, if not millions.
But I also wonder how much of my emotional reactions to many of the works -- by artists from the African Diaspora as well as Africa itself -- came from my having to rely on my gut and heart to "get" their power and message because insufficient effort was made to help me intellectualize and understand what was on display in the galleries.  Put another way: even while much of the art on display seemed cutting edge, the exhibit style is decidedly old school in terms of little information being provided about the works of art beyond the name, birthdate and nationality of their creators, their medium and size, and who are their owners/donors.
Back when this was the norm in art museums, the assumption often was that the only people who visited these establishments were cultural elites who shared the same culture -- and thus knowledge -- as the artists whose works had been deemed worthy of a place in these elite/elitist institutions.  But in the years and decades since, many art museums (including Amsterdam's amazing Rijksmuseum and Cologne's super-informative Wallraf-Ritchartz Museum) have come to collect and display art from more than one culture, society and civilization, and also have sought to attract a broader and wider audience than previously; and over the course of doing so, they have got to realizing that explanatory and interpretive labels -- and, in some cases, guided tours of the collections by art historians -- are often necessary as well as much appreciated.
Something else that I found rather disconcerting during my visit to Zeitz MOCAA was how every visitor I saw there was "white" even while the vast bulk of the art works that they were checking out had been created by "black" people.  Perhaps the visitor composition is markedly different during those three hours a week when the museum's 180 Rand (~US$14.50 or HK$111) entry fee is waived for citizens of African countries or those special Museum Nights when admission is free to all.  But I have a feeling this might not be the case, given the entirely privately funded institution's location far from the areas of Cape Town where the bulk of its black African population reside (with distances made to feel even further due to the lack of good public transportation).
Amidst all this though, it's also true enough that I did find myself feeling drawn to, and touched by, a number of the works I saw at the museum.  In particular, I found William Kentridge's More Sweetly Play the Dance to be the rare video installation that I was happy to watch in its entirety, felt compelled to read every word in Glenn Ligon's Runaways series of lithographs which hauntingly imagines how the artist himself would be described on runaway slave posters, and loved how Lungiswa Gquanta made clever use of a number of empty beer bottles in more than one of her works.
For sheer emotional and intellectual impact though, the works of Julien Sinzogan are hard to beat.  His La Jetee illustration of multiple long rows of enslaved men, women and children headed towards big sailing ships bound for the other side of the Atlantic Ocean threatened to break my heart while his Choc des Cultures --Bon Vent hammered home the technological inequality that existed early on during the European-African encounter but, simultaneously, seemed to pay tribute to the resolve by the underdogs to nonetheless try to defend themselves even when the odds were greatly stacked against them.
Posted by YTSL at 11:58 PM