Earlier today, I took a new friend hiking along a favorite route: that which goes from Wong Nai Chung Gap to the Tai Tam Reservoirs via Violet Hill.  But rather than have that be the subject of today's blog entry, I'm dipping into my ever burgeoning hiking photo archive to offer up pictures taken on a previous foray into the countryside that I went on with two different friends.

Like in today's case, I had gone on that particular Tai Lam Country Park trail (leading from Tsuen Kam Au down to Tsuen Wan via Shek Lung Kung) before and was introducing it to friends.  On that occasion though, the day that turned out to be quite a bit wetter than we had anticipated -- and we found ourselves seeking shelter from a downpour under the concrete slide in the grounds of the old Lin Fa Shan school!  Fortunately, however, the rain soon stopped and we were able to resume our hike in drier conditions -- and the next time it rained again was only after we were safe inside a cha chaan teng having our dinner! ;b 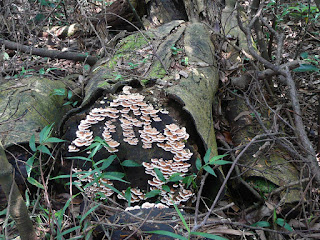 I often see fungi while out hiking in Hong Kong --
and unlike some people, I'd never dare to try to eat them! 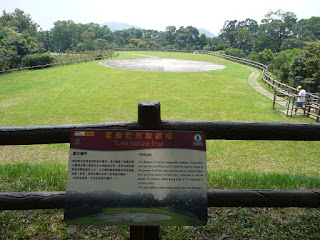 A helipad is not something I'd expect to see on a trail
with the word "nature" included in its name! :O 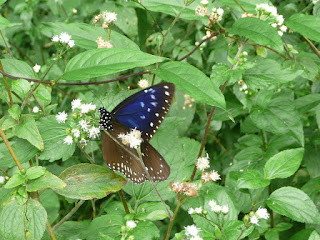 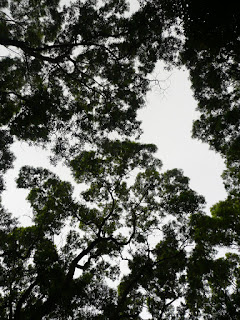 Shortly before the heavens opened, it got on the
gray -- and foreboding seeming -- side ;S 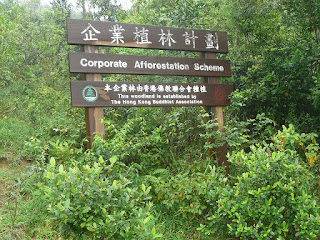 Is the Hong Kong Buddhist Association a corporation? In any case,
I'm cool with their taking part in the Corporate Afforestation Scheme ;b 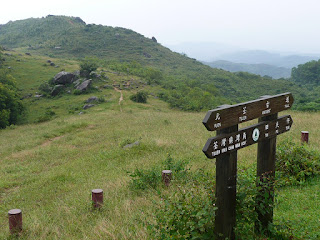 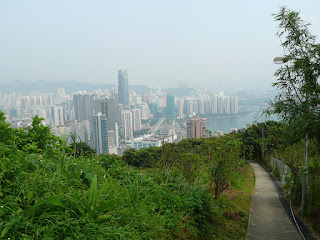 Long before we got down to Tsuen Wan,
we could see the high rise-filled section of Hong Kong 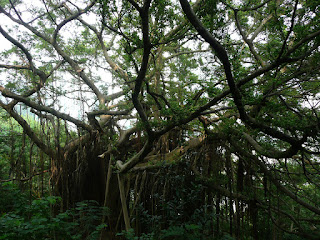 But even as we neared the city, there were ample signs that nature
really isn't that far away from the concrete jungle in the Big Lychee :)
Posted by YTSL at 10:35 PM

Your photos capture the variety of sights on this trail - a most pleasant way to begin my Sunday morning online time...Fourth photo from the top: when one points their camera upward at tree branches, interesting designs form in the open spaces of the sky, contrasted by the darker limbs of the tree (a wide angle 24mm lens is perfect for this).

Thanks for appreciating my photos. My personal favorite is that of the butterfly. It's really not easy to take photos of that particular species since they have a tendency to flap their wings even while resting on a flower, etc.!