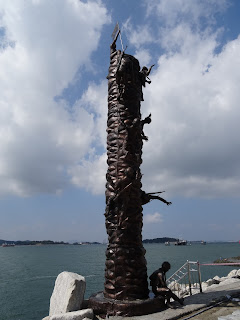 
Made in South Korea by South Koreans, there's little doubt that Kim Hak Soon's blockbuster war drama was primarily made for his fellow South Koreans; particular those of whom, among other things, recall the ectasy of their country co-hosting the 2002 World Cup Finals (with Japan) and their national soccer team's dream run in the competition but also the nightmare of the Second Battle of Yeonpyeong, a confrontation at sea between North Korean and South Korean patrol boats which took place while the World Cup Finals were still going on.


Northern Limit Line takes its name from a disputed military demarcation line in the Yellow (West) Sea that acts as the de facto maritime boundary between the two Koreas.  On June 29, 2002, two North Korean naval vessels crossed this contested boundary and engaged with two South Korean navy patrol boats.  And the military skirmish is indeed re-enacted with the help of the South Korean military forces in this fact-based cinematic offering which packs an emotional punch in no small part due to its audience realizing that much, if not all, of the dramatic -- and often very bloody -- events portrayed in the film really did happen.


The film's director-scriptwriter also wisely spent a good chunk of the maritime actioner introducing the audience to the crew of Chamsuri 357, the South Korean patrol boat primarily involved in the military action.  Consequently, when the bullets start flying, the viewers realize that actual human lives are endangered, not just faceless military personnel -- and feel more emotionally caught up in the proceedings.


But although pretty much every member of the 24-strong crew gets some "face time" in the film, three men's backstories are fleshed out more than the others.  The first of these is the ship's amiable young medic, Corporal Park Dong Hyeong (Lee Hyun Woo) -- a conscript looked by many others as having had an easy ride in the military for the most part due to his being the only son of a deaf woman (Kim Hee Jung).


Then there's the ship's "no nonsense" commander, Captain Yoon Young Ha (Kim Moo Yul), an ambitious career naval officer with a lot of respect for his father (Song Jae Ho) despite the latter having been demoted because of an incident involving his treatment of a North Korean military man. And although the sub-plot involving ship's helmsman, Han Sang Kook (Jin Goo), who wants to continue serving on the ship despite having problems with hand tremors and a wife (Chun Min Hee) who'd prefer that he stay on land, initially appears less affecting than those of Corporal Park and Captain Yoon, his part in the proceedings will not be easily forgotten by the film's end.


In the wake of its strong showing at the domestic box office, Northern Limit Line has gone on to get theatrical runs overseas (including the USA and Hong Kong).  Certain sections of the movie may not translate well (or, at least, instantly) across borders and there were a few elements (such as the real life plausibility of a personality like actress Lee Chung Ah's Captain Choi existing in the South Korean military) that I felt a need to do some research on to more fully understand -- but the fact that I did go ahead and do this surely says something about this cinematic work having been interesting enough to feel worth doing so for me!


In addition, the archival footage included in this film needs little explanation and moved me to tears.  And the fact that its usage did not feel emotionally manipulative is testimony to Northern Limit Line having generally worked as a genuine tribute to those who served on the Chamsuri 357 and their comrades in arms, male and female, past and present.