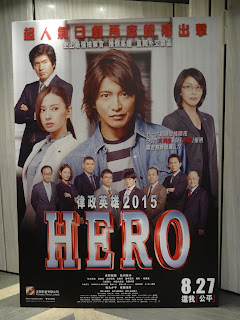 Advertising for one of many movies --
this one Japanese -- with Hero in its title!


On January 8, 2001, a legal drama debuted on Fuji TV that not only would achieve the highest series ratings on Japanese TV in 25 years but also go on to spawn a mini-series in 2006, a second series beginning in 2014 and two movies.  Starring singer-actor Takuya Kimura (of J-pop boy band SMAP) as the titular hero, the film versions at least operate more as ensemble works than one might have expect, given their lead actor's superstar status and the works' titles singular (rather than plural) emphasis.


Without having watched any of the episodes of the original Hero or any its made-for-TV follow-ups, I still managed to enjoy the first film version of Hero when I saw it in a Hong Kong cinema back in October 2007.  So when I learnt that there was a new Hero film out (known as Hero The Movie in some territories and given the title Hero 2015 here in Hong Kong), I looked forward to checking it out -- even while realizing that I actually couldn't remember all that much about the first Hero film that I had seen eight years ago!


But although its makers obviously do assume that viewers of Hero 2015 have some prior knowledge of the Hero universe, I found it fairly easy to mentally slip into the world inhabited by the film (and TV phonemena)'s characters.  Among other things, its makers' vision of a contemporary Japan which tries hard to be humane and tolerate (even welcome) individual idiosyncracies, even while showing how people work best when they are part of a team -- and backed by their teammates -- will be familiar to those who've watched a number of other contemporary Japanese films (including ones as diverse as feel good comedy Wood Job!, and the Umizaru coastguard action series that's also produced by Fuji TV).


It also helps that Hero 2015 sees the return of a former member of the Tokyo District Public Prosecutors Office to the Jozai Branch along with her assistant from the Osaka office that she now belongs to.  This way, her successor, Chika Asagi (Keiko Kitagawa), needs to be brought up to speed -- and the film's audience can be along with her -- as to the part that the now Osaka-based Maiko Amemiya (Takako Matsu) played in both the personal as well as professional life of Asagi's current boss, ace public prosecutor Kohei Kuryu (Takuya Kimura); and Asagi's current assistant, Takashi Ichonose (Koji Ookura), needs to be introduced -- and the film's viewers can be along with him -- to the other colorful characters working at the Jozai Branch!


The reason for Amemiya and Ichonose hurrying to Tokyo is that they learnt of the death in Tokyo of an Osaka-based hostess there.  Kuryu and Asagi were assigned to investigate the car crash that resulted in the woman's death.  After arriving at her former office, Amemiya informs the public prosecutors there that the deceased was a key witness in a bribery case involving the yakuza, after which it's realized that the circumstances of her death may not be as cut and dried as they had initially appeared.


Further complications ensue when it is discovered that the woman's death took place on a street situated next to the embassy of Neustria (a country one of the characters describes as being young at just 600 years; something which this Malaysian found pretty amusing given her country's really tender age!).  Because foreign diplomats have extraterritoriality, the Japanese officials can't go about investigating the case(s) in a conventional way.

But given how unconventional acting Kuryu is prone to be, it could be described as fortuitous that he's one of the officials involved!  And so it turns out, with interesting -- and at times also pretty amusing -- results that take in such as musings on what's capable of crossing borders, the discoveries that Neustrians love sausages and petanque, and -- but of course! -- various members of the Josai Branch doing their bit to bring the investigations to a success, and the Osaka public prosecutors too!

Hero 2015 isn't for everyone -- not least those who will want their movie heroes to be, well, more conventionally heroic!  It's also a work that has a noticeable TV show style (particularly with regards to its lensing) as well as links; one which the less generous may describe as not very sophisticated, and even downright hokey.  Despite it hardly being a perfect film though, I still found it to be an enjoyable watch on a big screen: thanks in no small part to it being the kind of film where the good not only triumph but the generous spirited are likely to find kindred spirits, including in seemingly unlikely -- and foreign -- places.

I have followed this series in its different forms for several years and am happy that there is more to watch. I am an on and off fan of police shows and enjoy watching ones from other countries when I can. Look forward to watching Hero 15.

Have you watched the TV shows as well as first film? If so, how would you compare them?

I have watched both series and the previous film, but not this one.

To me, the first film served as a true season finale to the first series (which had an open-ended ending), by mostly resolving the relationship between Amemiya and Kuryu. The series are usually episodic (it has a "case of the week" format), held together by the ensemble cast. I guess one distinctive difference between the original series and the first movie is the series being more of an ensemble tale, with most of the supporting characters having their own arcs etc. (I remember pre-A lister Abe Hiroshi's character having quite a cool character development in the first series, but I was still in high school then, memories are hazy)

the 2014 season is decent, also tries to focus on a large cast of characters, had some interesting cases, way less dramatic character development for Kuryu. But Matsu Takako's absence was sorely missed. Looking forward to catching this film somewhere sometime, I guess.

Thanks for your input. I can't comment on the TV series but I do like that the "Hero" movies are actually ensemble pieces that manage to give all the supporting characters something notable to do.

On a related note: it's cool that a number of the supporting cast members are actors I've recognize from a number of other movies. In particular, Gaku Hamada and Fumiyo Kohinata are actors whose presence in a film often bring a smile to my face. :)

How can I watch this movie. I saw about 1/4 of the movie while flying Delta Airlines. I enjoyed it but can't find a way to see the whole movie.

I viewed the movie when it screened in cinemas here in Hong Kong. I believe "Hero 2015" is already out on DVD and blu-ray in Japan and some other territories. If you're in the US, maybe it's available through Netflix or something of that nature?