Critter spotting heaven up on The Peak! 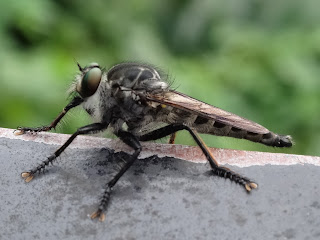 Can anyone help in figuring out what this is?!* 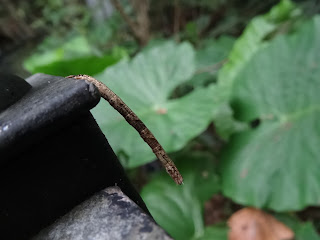 When this critter moved, I figured it was a caterpillar --
but when it stays still, it's hard to believe it's actually alive! :O 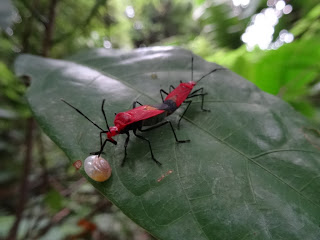 This I know is another pair of amorous stink bugs spotted on The Peak! ;b


Hong Kongers look upon The Peak as the province of the super wealthy.  And many a tourist is lured up there by the promise of spectacular views, even if they haven't quite figured out that what they are led to think is Victoria Peak actually is Victoria Gap, several meters below the actual top of Victoria Peak (which actually is not accesible to the public).


But the more I get to know this area of Hong Kong, the more I come to look upon it less as a place of privilege or a tourist trap and more as a prime area for cool critter spottings!  So even though today was not the kind of super high visibility day of the kind that makes hiking in the summer feel absolutely worthwhile to me, I decided to go up to The Peak this afternoon to enjoy a few hours in an area close to nature, and felt pretty confident that I'd be able to get in some interesting sights in addition to a a bit of exercise there.


Earlier this week, a photo of Taiwanese actress Hsu Chi (AKA Shu Qi) and Hong Kong celebrities Ekin Cheng and Yoyo Mung out hiking on Mount Parker Road was posted on the internet.  As I told a friend though, my chances of spotting celebrities while out hiking are pretty slim -- even when they hike on trails I've been on and am familiar with -- because I tend to focus my attention on spotting all kinds of cool critters rather than spend much time looking carefully at the faces of other hikers I see along the way!

And I realize that I may have seemed/acted rather strange in the eyes of a number of other people walking along the Peak Trail since, while their eyes were often drawn to the stunning (especially on a high visibility day) views to be had of Victoria Harbour and such from The Peak, mine were often focused more on the railings and -- what they didn't realize -- the critters that appear to treat them as a de facto highway!

Early on during this afternoon's excursion, I spotted what I initially thought was a dragonfly but am not so sure now after having had a closer look at it.  Honestly, this is the kind of critter that, in all honesty, I wouldn't know what section to start looking for if I had a bug book!  And I wouldn't be surprised to see that which I now think looks like a cross between a dragonfly and a mosquito be the inspiration for a designer working on a special effects movie -- or even turn out to be an alien from another planet!!


A few minutes and hundred meters or so later, I spotted what I reckon is a caterpillar moving about on the railings.  Upon noticing my attention (and my camera's long lens getting near it), it suddenly froze and gave me a pretty good impression of a thin twig!  If I hadn't seen it in action before, I would easily have mistook it for -- and dismissed it as -- an inanimate object.  And, I have to admit, so still was it that I ended up giving it a poke to try to figure out if it had died of fright or something about having realized that it had come to this giant creature's attention!

In contrast, I easily could figure out what the two colorful bugs that were staying pretty still even while seemingly stuck to each other were, and were doing: i.e., they were stink bugs in the middle of procreating -- only one of them also looked to have become interested in figuring out what a shiny shell near it was and/or housed! (And for the record: stink bugs really do seem prone to be distracted while having sex -- or be able to continue doing what comes naturally even while investigating or even outright pursuing something else! ;D)

*An update: thanks to a new bug book I've got, I can identify that scary looking -- and sometimes acting -- critter as a Robber Fly! :b
Posted by YTSL at 11:33 PM