The North District is the northern-most of Hong Kong's 18 districts, and also one of its largest.  When talking to people, I often get the sense that it's additionally the least visited -- which I think is too bad for those who don't realize that it's home to some scenic spots, including those located within Pat Sin Leng Country Park, which a friend and I checked out on a hike that saw us venturing along the northern section of Section 10 of the Wilson Trail and detouring to Bride's Pool rather than connecting with Section 9 and snaking up the formidable Pat Sin Leng mountain range.

Its location (closer to mainland China than much of the rest of Hong Kong) has quite a bit to do with many people being disinclined to go up there.  But I have to say that I've enjoyed every hike I've ever gone on in the area, and am often left with an urge to return again before too long. :) 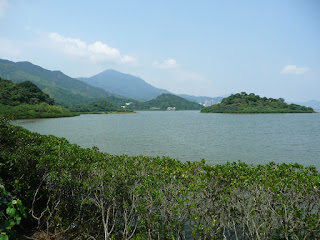 Even before we actually began our hike that day, my friend
and I already were being treated to some scenic views! :) 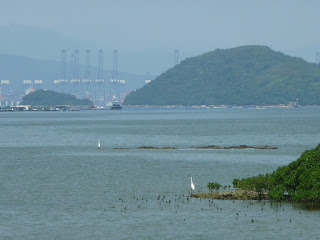 Something that strikes me every time I'm in the area is how rural is
the part of Hong Kong south of the Starling Inlet (aka Sha Tau Kok),
especially when compared to built-up Shenzhen over on the other side! 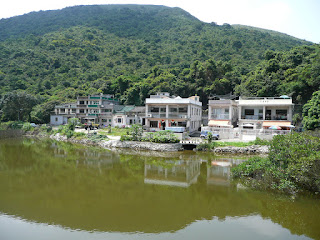 At Nam Chung are three villages bearing the name of the
area and also their clans (i.e., Yeung, Cheng and Lo) 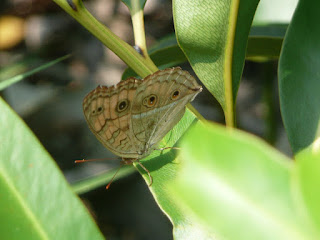 Also living in Nam Chung was this pretty lepidopteran :b 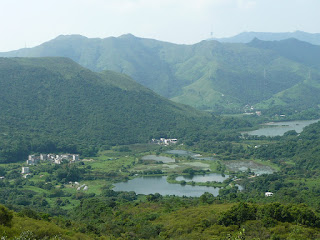 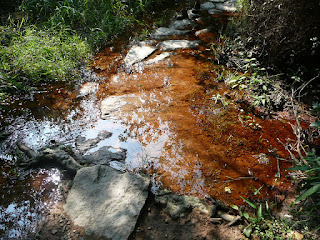 At certain points during the hike, it was best to keep
one's eyes on the path to prevent slip ups... :O 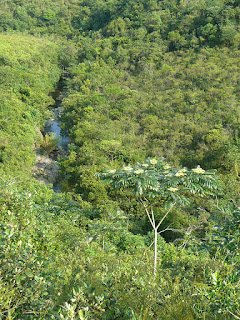 But the wet bits of trail couldn't dampen our spirits since we
were treated to lovely views of nature for much of the hike! 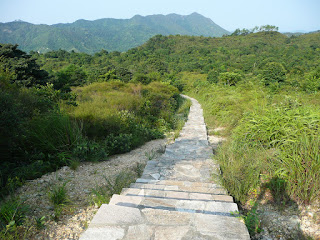 And, actually, some of the paths we went on
that day were very nicely laid out indeed! ;b
Posted by YTSL at 6:52 PM

This text and every single photo confirm that this was a rewarding hike...The second photo from the top, of the white birds is such a contrast to the background industrial area...Ever since moving to Florida from New York years ago, I enjoy observing waterbirds because they are so graceful...The fifth photo from the top is, as you say, "A splendid view of Nam Chung."

The bottom photo, with the photographer's shadow in the foreground, completes this well put together visual story.

Thanks for appreciating this photo-essay.

Re the white birds: The body of water may be known as Starling Inlet but I tend to see more egrets there. In any case, it is an area where wild birds, including migratory ones, seem to like quite a bit. :)