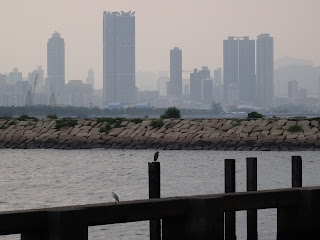 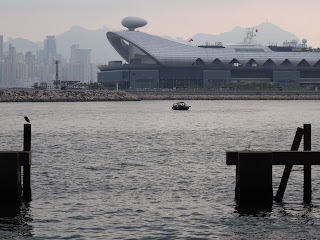 Another pair of birds occupied spots at the waterfront
A few minutes before sunset today, I went to the Kwun Tong Ferry Pier to take the North Point-Kwun Tong ferry operated by the Fortune Ferry Company.  Upon finding out that I had just missed a ferry and the next one wouldn't set off for another 25 minutes or so, I got to amusing myself once more with doing some birdwatching in the vicinity of the pier.

Granted that it's not akin to birdwatching at the Mai Po Nature Reserve or even the Hong Kong Wetland Park; not least in terms of their being considerably fewer birds and less species variety at Kwun Tong.  At the same time, I do find it fascinating to see as many large birds (including herons and egrets) -- rather than just pigeons and sparrows -- in this urban part of "Asia's World City" as is often the case.
I do realize that one of the reasons more of these larger birds are to be found in this area (as opposed to, say, the Tsim Sha Tsui Star Ferry Pier or the ferry piers at Central) is because the Kwun Tong Ferry Pier is not very busy most times of the day; with passenger numbers having dwindled considerably after the opening of the MTR in 1979 and then the Eastern Cross-Harbour Tunnel in 1999.

Still, it's not exactly as though Kwun Tong is a wasteland or out in the boonies.  Indeed, it's been an industrial as well as residential area for a number of decades now.  And while it's true enough that Hong Kong ceased to be a light manufacturing center some years back, Kwun Tong has experienced a renaissance of sorts in recent years -- with such as a major shopping complex and commercial center that includes a number of skyscrapers that wouldn't look out of place in Central having been established there, and some major film companies (including Johnnie To's Milkyway Image and Peter Chan Ho-sun's We Pictures), art galleries and music companies having chosen to base themselves in the area.
In addition, the largest bus terminus in Kowloon is located very close to the Kwun Tong Ferry Pier.  But you wouldn't have thought that, if you were making judgements based on the photos at the top of this blog post alone, would you? ;b
Posted by YTSL at 8:40 PM

There are egrets and night herons in that area as there are lots of fishes in the sheltered water there. They are sustained by the fished.

There used to be lots of black kites in the area when the airport was still around. There are sparrows on the lawn nearby. Those sparrows are so used to people they wouldn't go away if they don't see you as a threat.

I would usually hear some other common birds like Black-Collared Starling (they are very noisy and you just couldn't miss them. They like to walk too), or Magpies at times. if you walk towards Megabox, you might be able to hear at least one Parrot. I think someone has a pet parrot in the area.

It makes sense that there's lot of fish in the sheltered waters in that area. Have seen some people fishing there -- but more so at, say, the Central piers and Siu Sai Wan promenade -- but way fewer large birds about.

Interesting re the parrot -- I'll try to remember to listen for it should I ever walk from Kwun Tong to Megabox. :)

For Central Piers, I have spotted people fishing towards the government piers on the west end, close to HK/Macau ferries.

If birds are concerned, there are herons and egrets in North Point as well. They would usually linger close the North Point piers and under the Eastern Corridor. There would be a bit more Japanese white eye and other escaped pet birds in the neighbourhood. The usual Black Collered Starling and magpies are everywhere. There might be crows/ravens closer to the slopes these dyas.

I've spotted people fishing in between the piers for the outlying islands ferries and also near the public pier to the east where Lamma's Rainbow Restaurant boat docks.

Also have seen people doing so at the North Point pier but haven't spotted many birds there, actually! And I've never noticed escaped pet birds in the neighborhood but will try to keep an eye and ear out for them in the future! ;D