A Hong Kong service that cannot be taken for granted, especially post living in Tanzania 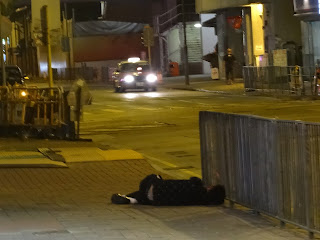 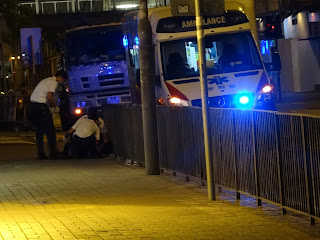 Paramedics at the scene less than 10 minutes later!


When I was living in Tanzania two decades ago, I was told a tale that chilled me to the bone.  A friend of a friend had gotten drunk one night and, in a fit of anger, had punched his hand through a sheet of glass.  He had been rushed to the emergency room of the main government hospital at Dar es Salaam, the East African country's largest city -- and ended up bleeding to death there after not having been attended to in time.


Granted that he had been drunk and done something stupid while under the influence of alcohol.  But surely he -- who had worked as a teacher, and had tutored my friend's two daughters -- didn't deserve to die so needlessly.  But this is what is liable to happen when you live in a Third World country that, the first year that I lived there, was ranked by the UNDP as the second poorest country in the world and the second year, rose to become "only" the world's third poorest country.

I got to thinking of that Tanzanian man earlier this week when making my way home late one night.  Upon rounding a corner, I saw a man sprawled on the pavement in front of me.  I couldn't tell if he was drunk, drugged or something else altogether -- but I did realize that he was not in a good way, and proceeded to call 999 and make a report to the woman who answered my call.

Within 10 minutes, an ambulance arrived at the scene -- and it was soon followed by three policemen on foot.  In all honesty, I was left in awe by the quick response of the emergency services over here in Hong Kong.  And while I didn't stay to see what happened with the man who had been lying on the pavement, I think it's safe to say that he was in far better hands than that friend of a friend in Tanzania.

All in all, I wouldn't be surprised if Hong Kong's emergency services had some of the fastest response times in the world.  Because I really can't imagine their equivalents in the other places in the world I've lived in being so quick to get to the scene -- and apart from Tanzania, I've also lived in England and the USA as well as Malaysia!  If so, those living in Hong Kong really should count their lucky stars -- and realize that what they see as the norm, and are apt to take for granted, really, sadly, can't be universally counted upon.
Posted by YTSL at 11:44 PM

Ten minutes response time - that is quick. I think you did the right thing by calling emergency services. You contributed something to a densely populated urban environment, by taking interest in a total stranger.

well done Yvonne! If only more people had the common sense to make a call - many times people are too scared or just assume others have already done so.

I wonder if the response time was good because it was late and there was less traffic, the amount of time I see ambulances stuck behind cars unwilling to make room to let them pass. In the UK EVERYONE pulls their cars to the side of the road, or if at a red light will move forward (if safe to do so) to let the vehicles through. I rarely see anything like that in HK grrrr!

While I was waiting for the ambulance, I saw another passerby get out his phone and make a call too. In contrast, the security guard of a nearby building went over to have a look but I don't think he deemed what was happening worthy of an emergency phone call!

Thanks. Actually, on more than one occasion, I've seen Hong Kongers reach for their phones to make a call before I did -- sometimes because they recovered from a shock more quickly than me.

And yes, it was late at night (around 12.30am) and I get your point re many cars being unwilling to make room for ambulances to pass. In some of their defence though, sometimes the Hong Kong roads seem so crowded and narrow that it's hard for the cars to move and make room. Still, it'd be good if drivers made more of an effort to make space and way for ambulances and such!