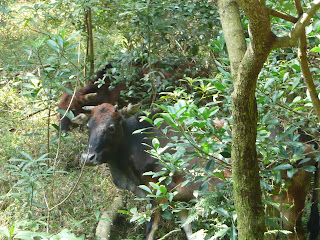 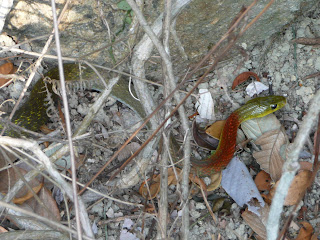 And how come a snake's about and so wide-eyed
despite it still being winter?! :O

Okay, so I think I'm going to have to revise my idea about there being few critters to be seen while hiking in the winter months in Hong Kong.  This since one week after spotting a couple of cool grasshoppers while hiking in the Luk Wu Plateau area and two weeks after coming across a skink as well as a grasshopper while venturing along Stage 4 of the Wilson Trail, the two friends I was out hiking with earlier today and I caught sight of butterflies, cows and a snake over the course of our trek from Tsuen Kam Au to Tsing Lung Tau.


As you may have guessed, it was another warmish winter day today -- so warm that for much of the hike, I was hiking in shirtsleeves (and short ones at that), though I did have long trousers on instead of the below-the-knee shorts that I favor in the hotter months.  (In temperature terms: Weather Underground recorded a maximum temperature of 23.9 degrees Celsius (in Wong Tai Sin) for today -- but I'd say that it was a few degrees cooler than that in Tai Lam Country Park thanks to it being at a higher elevation and also there being many shady areas within Hong Kong's second largest country park.)


For all of it being unseasonably warm though, I really didn't expect to see a snake on our hike today!  But upon hearing a rustling on the ground and looking about to see the cause of the noise, we discovered a red-necked keelback lying just a meter -- or less! -- away from the left side of the trail that we were on!!


For the record: the red-necked keelback is one of the many dangerous and venomous snakes to be found in Hong Kong -- and one of "just" eight of the 14 venomous native land snake species in the territory that can inflict fatal bites. (Hong Kong is home to a  total of 52 snake species -- most of them land snakes but also six sea snakes!)


But maybe because it is so colorful and pretty -- for a snake! -- I couldn't help but want to take photos of it! I think I was emboldened by this red-necked keelback electing to stay very still after it realized it had been spotted by three people.  Maybe it was because, as one of my hiking friends suggested, it was still feeling lethargic since it must have only fairly recently woken up from its hibernation.  In any event, I also felt less freaked out due to it not doing the usual snakey thing of sticking out its tongue or, way scarier, hissing and making like it was going to strike.

All in all, this was the closest I've been to a snake -- and in the wild to boot! -- for a long time.  And should anyone wonder about my closest snake encounter: it was when I was doing archaeology in the American southwest decades ago and I literally crossed paths with a rattlesnake -- only very fortunately, instead of my stepping on it (and causing it to strike me), it went over my right foot (with very little harm done to me -- except that my heart beat plenty hard when I later saw what it was that had temporarily put some weight atop my fortunately thick hiking booted foot!)! ;O

*And for those who didn't know: Hong Kong people like eating snake in the winter because they believe that eating snake warms one up!
Posted by YTSL at 9:57 PM

How appropriate to discover a snake just before the Year of the Snake! Maybe it's a good sign!!

I think what's a very good sign is that the snake didn't try to bite any of us. One of my friends talked to it and even called it "little buddy". Maybe it understood her! :D

Wow! Holy cow! Hehe...I guess that was the first photo. The Year of the Snake is coming in a few weeks and you spot a poisonous red neck keelback snake while hiking...I'm not superstitious but maybe it's a sign.. of what I wouldn't know...Maybe its green head has some connection to Maggie Cheung.....I guess that a bit of a stretch.

Did you know it was a deadly keelback before you took the photo, or did you find that out after? : O

Although some of our local snakes have potentially fatal bites, it's years since I actually read of anyone dying from snakebite here, and i believe that was a worker in a snake restaurant. Most of them will slither away when they hear you coming.

Teehee re your reading of my first photo! And if I were to judge the upcoming year by the behavior of the snake I encountered yesterday, I'd say that one notices its coming into the picture and greets it with some trepidation but be careful and you'll emerge okay, and even with a good feeling. :b

Yes, I did know that it was a red-necked keelback before I took the photo as my friends and I had encountered another of its species before on a previous hike! :)

Like you, I haven't read lately of someone dying from a snakebite here. Still, I have to admit that my usual impulse is to get away from a snake rather than go nearer it. At the same time, most other snakes I've encountered have been much more slithery -- and thus more scary -- than this one!