Hanging food -- and other food musings 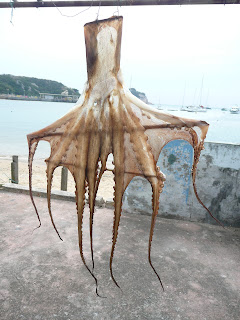 An octopus hung out to dry 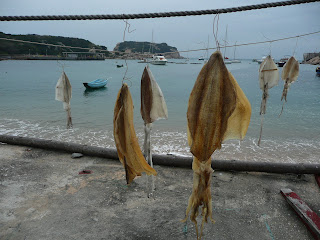 Lots more squid (or are they cuttlefish?)
also hanging out in the sun 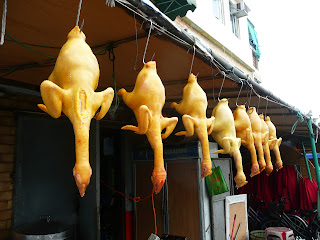 Real -- not rubber! -- chicken hanging in a row
on Cheung Chau

A few years ago, a good friend -- and fellow Hong Kong film fanatic -- from Brooklyn came over to Hong Kong for a holiday. While looking about for a place to eat in my neighborhood, we passed by an eatery specializing in siu mei (various roast meats including char siu and siu yuk) that, like others of its ilk, hung its offerings near the window for all to see.  For me, the sight was very appetizing -- and it was only when my friend reacted with horror to that same sight that I realized that not everyone has the same positive reaction to it as me!

A couple of Sundays ago, I caught sight of of a large octopus and several smaller sea creatures (that were either squid or cuttlefish) hanging on lines at Po Toi's inhabited area, near the famous Ming Kee restaurant.  I found the presented vision to be fun(ny) and cool, and couldn't resist going up closer and taking photographs of the drying critters -- but I have a feeling my Brooklyn buddy would have wanted to steer clear of them. Ditto re the row of chicken I saw on a visit to Cheung Chau -- chicken which, more than incidentally, look remarkably like the joke rubber chicken that squeak when you press them that I've seen being sold in novelty stores at the upper end of Mongkok's Fa Yuen Street!

On a more serious note: I am one of those people who is happily an omnivore.  And I am okay with knowing full well that the meat I eat comes from actual animals that used to be alive before they were caught and killed for human consumption.  Also, the more time I spend living in Hong Kong, the more I've come to have a culinary preference for particular animal parts as well as particular animals. For example, I find that not only do I like pork, beef and mutton (be it the meat of lambs or goats) more than chicken and turkey but I also really love pork neck, pork belly and pig's ears more than other cuts of pork -- and oh, I do like duck's tongue and chicken feet too (and yes, I do reckon it's a cultural thing)! ;b
Posted by YTSL at 6:49 PM

I think I'm somewhere in between you and your friend, with respect to my attitudes towards hanging pre-food animals. When I lived in France as a teenager, I was very disturbed by the whole animals (often rabbits and small animals, but occasionally something largr) that would be hung in front of butcher shops. These days, while I wouldn't go as far as finding them appetizing, I do find them fascinating to look at.

That drying octopus photo is quite spectacular!

Have to admit that I've baulked at eating rabbit. (Some years back, the then Prime Minister of Malaysia, Mahathir bin Mohamed, was trying to encourage people to eat rabbit satay -- I just couldn't).

But the thing with the siu mei is that I KNOW how great char siu, siu yoke, roast goose, etc. taste. So... ;b

this is what andrew zimmern would consider bizarre foods. although i eat all those that's hanging in there.

Funny, isn't it, that whole chicken may look like a bizarre food and ditto re certain parts of it (e.g., the feet) but certain other cut up parts of chicken (say, the breast or drumstick) wouldn't?

For my part, I think that an animal has died to be consumed by humans -- so better to eat as much of it as possible rather than just select parts of it. (And yes, that's why I hate the idea of sharks fin consumption!)