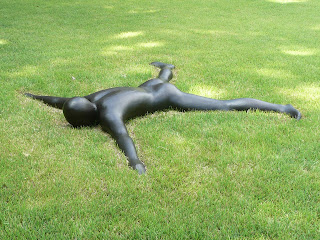 A cheeky sculpture on display
at the Hakone Open Air Museum 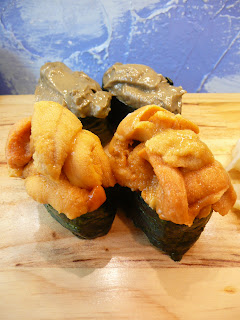 Best aquatic experience: In February last year, I enjoyed an Okinawa rendez-vous with two friends: one of whom is based in Tokyo, the other of whom resides in Vermont  Although we didn't go swimming in the beautiful waters of Okinawa, we spent a lot of time on, near and plain gazing at the magnificent ocean.  While I enjoyed every day of my all too short Okinawan vacation, my favorite by far was the day that we spent time inside an underground observatory and went on a glass bottom boat ride at Busena Marine Park. Together, those two attractions make up the best aquatic experience I had in 2012 -- though if I had to decide which one I'd most want to check out again, it has to be the underground observatory, in large part because one could stay and linger there as long as one wanted to! :b


Best book: At last year's Hong Kong International Film Festival, Peter Chan Ho Sun -- whose works include He's a Woman, She's a Man, one of my five favorite films of all time -- was the filmmaker in focus. In his honor, there was a programme of his works, an exhibition that was the largest display of his works to date, and the publication of Peter Ho-Sun Chan: My Way. Edited by Li Cheuk To, this thick tome contains informative interviews with Peter Chan and collaborators including Sandra Ng, Eric Tsang, Joho Hui and Takeshi Kaneshiro, essays on his work, and various film notes. It's not only the best book I read in 2012 but the most interesting film book I've read in years!

Best garden: One very hot day last August, I went to the Sankeien Garden in Yokohama. I must have sweated buckets over the course of the few hours that I spent strolling about and checking out the attractions (that included many interesting old buildings) within its environs.  But I really didn't mind for the most part because there was so much beauty to behold there.  Oh, and it helped that there were places there where one could stop to get some lovely ice cream as well as refreshing drinks. ;)


Best hike: According to the hiking diary that I keep, I went on 38 hikes in 2012 -- the most hikes I've gone on thus far in a single year.  A number of the entries have asterisks next to them -- denoting that I had got much out of going on the hikes in question.  But there's no question in my mind that the best hike I went on last year was the southwest Lantau one took me up three different hills and offered up unusual sights including a flying dragon and a beautiful -- even if decaying -- Chinese garden and retreat. (And yes, I'd definitely not rule out going on this trail again -- though as my hiking buddy, it has to be in cool weather as it's quite an exhausting trek...)


Best musician heard live: Back at a HK Sinfonietta concert in 2010, I heard Chinese violinist Ning Feng play for the first time. In 2012, I had the privilege of hearing this amazing musician live in concert not just once but twice -- at a Hong Kong International Chamber Music Festival concert in January and at a Hong Kong Philharmonic Orchestra concert in September that had the violinist as the featured soloist for Chen Gang and He Zhanhao's sublime The Butterfly Lovers Violin Concerto. And I really do hope that I'll be able to hear him playing live once more in 2013 and in the other years to come...

Best museum: When I visited Hakone last year on a day trip from Tokyo, I knew that I'd have to hurry about in order to make sure that I'd make it out to Lake Ashi before sunset. Having said that, I couldn't help but want to linger at the Hakone Open Air Museum that displays more than 100 sculptures at any one time in a truly beautiful setting. Japan's first open air art museum (it was established in 1969), I can easily imagine that it remains the country's most magnificent. Oh, and I can imagine that it's the one of the few museums in the world whose facilities include a relaxing footbath that makes use of hot spring waters that bubble from under the site! ;b


Best museum exhibition: By far the most expensive exhibition I went to -- at 2,700 yen for admission -- also is the best exhibition I went to in 2012 by quite a long chalk.  It was pure luck and coincidence that the Tutankhamun and the Golden Age of the Pharoahs exhibition was being held at Ueno Royal Museum when I visited Tokyo last August. But once I discovered that this was so, I simply had to check it out; this even though it cost more than many sushi dinners I had in Tokyo, and involved my having to wait several hours to get into the exhibition space. As it turned out, it's one of those shows that exceeded, not just met, expectations -- and I'm really very happy and grateful that this was indeed the case. :)

Best performing arts show: When I was a child growing up in Penang, my mother took me to see a film showing Chinese acrobats performing amazing feats that I had a hard time believing that humans were capable of. On one July evening last year, I got to see the China National Acrobatic Troupe perform their Splendid show that included bicycle balancing involving an unbelievable number of performers, contortionist acts, tumbling and much, much more. I know that acrobatics is considered too low brow to truly be art by some people.  But I truly admired -- and sometimes was downright in awe of -- the talent and skill on display at this super entertaining show.  (The costume designers for this show, on the other hand, could do some improvement as some of the outfits were so awful that they really did cause me to laugh out loud... ;D)

Best regular restaurant: How much do I love the Hysan Place branch of Senryo?  So much that I try to go there once a week -- and I'll also readily admit that it's my "go to" eating cum dining establishment to de-stress at. The sushi is regularly good and fresh, the menu includes interesting seasonal specials, I can get junmai sake there and the service is first class -- thanks in large part to Amanda, its multi-lingual (Cantonese, Putonghua, Hokkien, English and Japanese-speaking) Hong Konger manager whose knowledge of Japanese food is aided by her being married to a Japanese sushi chef! :)

Best single sushi order: One evening some months back, I was in a bit of a funk and wanted to cancel a dinner date with my uber foodie friend. But after she successfully persuaded me to believe that some good food would be able to make me feel better, we went and dined that evening at a then newly opened sushi-ya that turned out to have food that was beyond good. Indeed, both my friend and I consider the Hokkaido uni (sea urchin) we had at Kiyoshi Sushi to have been the most delicious we've ever had -- and in all honesty, that's saying something because uni's my friend's favorite sushi and she's eaten a lot of it over the years, as have I.  Even more amazingly, I've since returned several times to that which I consider to my favorite new restaurant of 2012 -- and each time I've ordered the Hokkaido uni, it's never failed to disappoint! :b
Posted by YTSL at 11:40 PM

Our trip to Okinawa was a highlight of 2012 for us too. The underwater observatory was my favorite place we went too. I could have spend all day looking out the portholes at the various fish and vegetation.

Hi YTSL, I really enjoyed reading about all the things, places and experiences that made your your 2012 list. It looks like you had an amazing year. Thank you so much for sharing them with us. I am looking forward to reading about your 2013 experiences.

I'm glad all three of us had such a good time in Okinawa together. Other highlights of the Okinawa trip: the first morning on the balcony of our hotel room gazing out at the ocean view; the lunch we had near the castle; the stroll around Manzamo; and the dinner at that izakaya with the amazing seafood salad! :)

I'm glad you found the 2012 list interesting -- and enough to click on the links and check out related blog entries. :)

Yes we did. When Morgan was home last week we were telling her friends about the things we did there and how much fun we had. That seafood salad was unbelievable to me.

We should go on vacation together again before too long... More re that seafood salad: I took a photo of it, as you may recall, but that picture really doesn't do it justice. That fresh sashimi and veg... what a great combination, and I loved the dressing too!

Interesting read, YTSL! Looking forward to the "10 highlights" of your movie-viewing year of 2012.