Two other films viewed last Sunday at the HKIFF 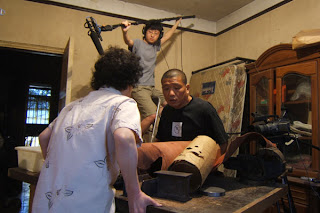 Oxhide II (and I)'s Liu Jiayin and her parents
in their apartment turned film set
(Picture from sensacine.com)
Once upon a time, I would happily watch up to five movies a day at film festivals. These days, I try to space out my film viewing more. But this past Sunday, I ended up watching three movies; with the first being Fei Mu's sublime Spring in a Small Town (which I wrote about here) and the two others being the following:-

Before the screening of this 132 minute film, its director (and scriptwriter, cinematographer, sound engineer, editor and co-star!) said a few introductory words -- including cautionary ones to the effect that it required patience from its viewers. And the first ten to fifteen minutes of the work did indeed give some reason for thinking that -- not least since for most of that time, there was just one person in the frame and most of his person (including his face) was actually not visible to the audience.

In addition, if you consider that the basic elements of Oxhide II consist, in the words of the young woman behind it, of just "[o]ne table; three persons; one scene; nine shorts", there simply is no mistaking it for anything else other than a minimalist art house film. And this even without adding to the equation it being so that: "[t]he shooting place would be my home, the area is under 50 square meters, the only scene is an outer place of the house totaling fourteen square meter[s]"; and "father, mother and daughter would be acted by my parents and I, three of us would be the whole crew, and there is no extra person in the shooting scene, except three cats" (Liu Jiayin in the 34th Hong Kong International Film Festival program catalog, 2010: 51)!

Yet, the further one gets into the film, the more enthralling it becomes -- and so much so that not only does one find oneself intensely interested with what's unfolding on screen (ostensibly the making and then consumption of seventy-three chive and meat dumplings, accompanied about conversation about the process but also matters like the father's ox hide bag business) but also the sounds that give you a clue of what's happening just outside the frame and the technicalities of how the film was made, including such as the precise camera positions and angles utilised.

But lest this all sound too serious, here's pointing out that there's quite a bit of comedy in the film -- to the extent that as oxymoronic as it may sound, this offering really works as a minimalist art house comedy! Also, watching three people attempt to eat 73 dumplings actually got me feeling incredibly hungry (and, of course, craving dumplings!)!

So it actually took a real effort to not immediately bolt out of the theater in search of food at the end of the screening. But am I glad I stayed for the Q&A session afterwards because hearing Liu Jiaying talk about the film was incredibly illuminating. And even though she spoke pretty matter of factly, I could not help but come away from that session in absolute awe at how much and thoroughly she had thought about things to create the amazing work that she has -- a masterfully crafted effort that is in many ways a tribute to craftspeople, be they crafting bags out of ox hide to sell or making dumplings by hand for a family meal.

A confession: I was about 15 minutes late into the screening of this film that I attended -- this because after viewing Oxhide II, I absolutely had to (a) attend that other work's Q&A session and (b) go and eat something pretty substantial. Also, I know that my ability to appreciate this movie was negatively affected by how strongly Oxhide II had outright blown me away. Consequently, I watched much of this Taiwanese film from an emotional distance it really didn't deserve.

For all this, I do think that I did come away from the screening with something -- including a sense that its subject matter (complex traditional Taoist Taiwanese funerary rituals and practices) is one that as fascinating as it is unorthodox. Also, that this movie's makers had given it a surprisingly comical treatment at times -- so that one came to see humor in the daughter of the deceased being effectively asked to cry, if not seriously mourn, on cue and the Taoist priest in charge of funerary proceedings being into such as writing and declaiming foul mouthed poetry in his free time.

All in all, even while clearly a fictional feature, there also appear to be elements in the work that regular Taiwanese folks will recognise as genuine depicted elements and aspects of their culture and community. Additionally, the few scenes of expressed grief and flashbacks to precious moments shared between then younger child and still alive parent are recognizably strong sections of a film whose makers also do seem to want to convey the sense of loss that comes from a beloved father's demise along with the over-complexity -- and consequently inadvertent hilarity -- of a certain society and culture's traditional mourning customs.

My rating for this film: 6.5 (and with the sense that if viewed in other circumstances, it might have been as high 7.5, even 8.0)

yeah, u get the point... tribute to craftmanship! pay attention to every single details in making dumplings, and they got their own opinion and method to argue with each other.

Just a note to thank you for your HKIFF film reviews. I haven't seen any of the films mentioned except Police, Adjective. I find all your reviews to be educational, informative and entertaining.

For what's it's worth, I really enjoyed Police, Adjective. . . and the ending! A chilling reminder, from a country which not long ago threw off the chains of heavy state surveillance, that 'police' is not only a noun but also an adjective.

Look forward to more reviews from you!

Heard good things about Oxhide II so was glad you liked it so much. I'm enjoying your reviews and hope to see some of the movies at festivals this summer. How many films do you watch this weekend?

Yes, indeedy, re "Oxhide II" being a tribute to craftsmanship. So... you know how to make those dumplings after watching the movie? ;b

Thank you for reading and appreciating my reviews! And bear in mind that quite a few of the films I've written about will be screened again before too long -- e.g., "Gallant" should be getting a theatrical release before too long.

Re "Police, Adjective": films like it are what makes (international) film festivals worthwhile. :)

Hope you get a chance to see some of the films I like at festivals or, at least, home video (with English subtitles).

Re the number of films this weekend: am taking Monday off again -- so if you include that day and today, the total is 7... ;b