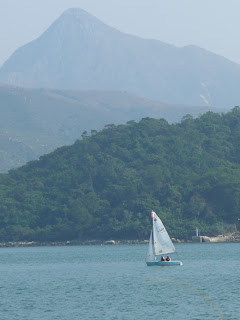 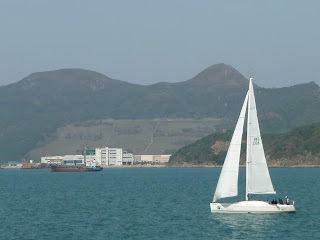 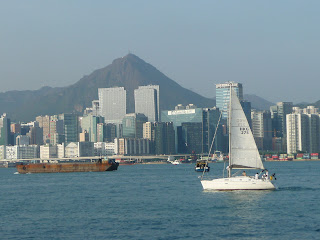 Tnchick sure does like triangles! That was my reaction after seeing this week's theme -- for I've put up Photo Hunt entries on this theme not once but twice before (on April 11th, 2009 and July 7th, 2010) !! So it was a triple more difficult challenge than usual to come up with a fresh addition to her meme... which triply increases the sense of accomplishment upon actually being able to do so. :)

In keeping with the triple triangle theme, I'm offering up three photos in this week's entry. This time around, I've gone with a blend of nature and culture -- in terms of human activity (specifically leisure boating) amidst a scenic natural backdrop in one case and a mix of buildings and greenery in two others, but all of them featuring distinctly shaped hilly peaks.

The first shot features the aptly-named Sharp Peak in the background along with a small boat with triangular sails. And although the photo in the middle (with the benign side of famously treachorous High Junk Peak viewable in the distance) might seem at first glance like it was taken on the same body of water bordering the northern portion of the Sai Kung Peninsula as the top most snap, it actually shows a boat sailing in Victoria Harbour just like in the third photo (whose skyline is dominated by Kowloon Peak) -- only in a much less busy part of the natural deep harbor that is a major jewel in Hong Kong's crown (and one that's bordered by less built up areas of land)! :b

I love sail boats and didn't even think of that for the theme. Beautiful shots of the sail boats you have here. Happy Weekend.

Thanks for stopping at my photo blog. I love your triangle photos - nice job!

What lovely views of the sailboats I'm certain the view from them is equally spectacular. I live very close to Lake Ontario here in Toronto and I enjoy watching the sail boats out in the harbour :)

Glad you like the photos of the sail boats and happy weekend to you. :)

You're welcome and thanks for the return visit :)

Sail boats sure do help make a body of water more scenic. :)

lol! you sure have a superb memory!

What a nice interpretation ! the top of a mountain and the sails ! good idea !

Not just the sail boats but even the hills behind more than pass muster. Enjoy your weekend. :)

Actually, I just remembered one past Triangle-themed Photo Hunt but when I did a blogger search, I came up with two previous entries! :b

Do you sail or just like to look? I fall in the latter category myself... ;)

Thanks for the double positive vote. Hope you have a good weekend too. :)

Sailing and mountains, what an excellent combination!
Great shots!

I like your blend of nature and culture. These photos make me feel very peaceful too. Have a great weekend.

Sails are a perfect shot for this week's theme.

Love your triangles this week - they are positioned cleverly, too! Have a great weekend.

Hi YTSL, love it! Very cool take in the blending of man's and natures offering for this week's theme. Cool how you captured the mixture of the pairings in all three shots.

Excellent take on the theme. There's nothing like watching yachts doing what yachts do best

I remember we had triangle once before didn't realize that it was 2x before. You sure did wonderful on this theme.

Ah, sailing! Great shots of them. Looks like a wonderful day to sail.

Must admit that I do like my mountains and water shots -- and having boats in the photo are a nice bonus. :)

I know what you mean re the peaceful shots. Sail boats, when viewed from a distance, can seem to glide so peacefully by. :)

Thanks for appreciating the positioning. For a couple of them, I definitely did wait a bit to make sure I got a good placement with regards to the boats. :b

Thank you, and hope you have a good weekend too. :)

Shows how long we've been Photo Hunting that we can notice repeat themes, huh? ;b

So lovely, both boats and the view. I want to be in one of those boats, for sure.

Mountains and sailboats seem an improbably combo and yet... :b

It does look great to be cruising in those waters, doesn't it? :)

White sails on an ocean or a lake are gorgeous! With all our heat right now, I would love to be on that water.
My lighthouse triangles are here.

How I love sails gliding on water! Always fascinating and romantic! Lovely photos!

With all the heat now, I wish that autumn/fall will come again soon! ;b

I'm not sure about romantic but will agree with you re the fascinating part. :)

Sorry, Kingwho?, I prefer my triangles to be more... clean cut! :b