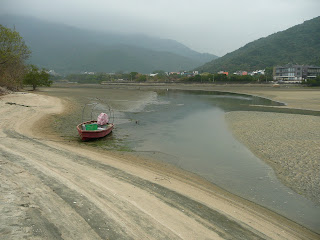 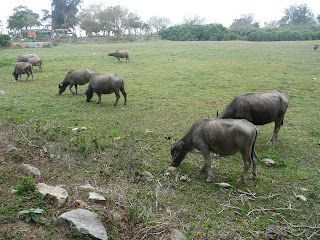 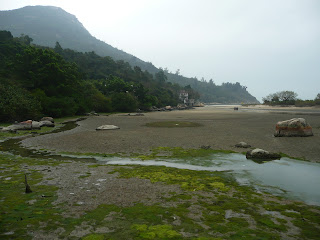 On first glance, the village of Pui O on Lantau Island can appear unremarkable or even on the too dirty side to be a good place to visit. I personally reckon it's quite the charming and interesting place -- and unusual on account of two of it being a place where feral water buffaloes roam in now abandoned paddy fields and whose beach has a striped look on account of its sand being a mix of yellow and black.

Re the water buffaloes: they have both their defenders and detractors within the village and beyond. For my part, I like the novelty of seeing them but also recognize that their color contributes to their coming across as dirty. And then there's the difficult-to-overlook matter of their having to defecate seemingly all over the place. (For those who want proof, click on the photo with the water buffaloes in them in this Photo Hunt entry to get a larger look at what the piles on the ground are -- though it's also true that some of the black blobs also are small birds!)

Re the landscape shots: the top most photo is a shot of the place where the sea merges with a river during high tide but on the afternoon of my most recent visit, fresh and salt water was not meeting up and mixing on account of it being low tide at that point during the day. And on a previous visit, much of the ground in the bottom photo was covered with water.

This last time, however, copious amounts of mud and what looks like a green sludge were on view -- and while it can indeed make for a dirty looking sight, I have to admit to also thinking that the green added some color to my photos -- taken as they were on a gray sky (though not actually generally unpleasant!) day out in a quieter, more nature-filled part of Hong Kong than many other populated places in the territory! ;b

It doesn't look too dirty on the whole, perhaps a bit muddy. Best to photograph it and not walk in it!

As regards to animal waste, you should consider Canada Geese, who are the worst ever for this problem. At least those water buffalo piles are highly visible to most therefore avoidable.

lovely pics
loved the 1st one the best!

That looks like an interesting place to visit. Great idea for the theme and good shots.

One cannot imagine such great nature in busy city Hong Kong. Wish I could spend more time in HK to explore further whenever I'm there.

I agree, to photograph the whole is best, don't walk! :D

Another great take on the theme. I can imagine that buffaloes leave very large, ahem "remains" ... Not at all fun to tread in!

i didn't know there are water buffaloes in HK! is there a farming community in this area? they love to wallow in mud, and yes they leave piles behind.:p but still, they have the right to be where they are.:

Proof yet again that there is always beauty in the midst of dirt! Great shot for this week's theme.

It does sound like an interesting place with feral water buffalo roaming about! Always learn something to new when visiting here :)

I think we were thinking along the same lines. Dirt is Dirt. Great Post!

Hi YTSL, great photos. I found the water buffalos interesting, although I favor my beautiful Highland cows a bit more :) .

I agree that the green in your last photo really makes it a very cool image. Great captures and a wonderful take on this week's theme. Enjoy your weekend.

Yikes re the thought of Canadian geese waste. Hope they don't plop onto people from the air!!!

I like the first photo best too -- but think the two others are good at illustrating the theme (as well). :)

Pui O is indeed interesting to visit. It also seems a livable place -- for those who work near there or at home, that is!

I thought they are plenty dirty -- without looking too ugly for me to want to put up on my blog!

One thing to bear in mind is that Hong Kong isn't just a city but a territory. The funny thing about it is that it has a lot of countryside and country park-designated land as well as super urban areas -- but it actually doesn't have much suburban space.

Sorry, where did your comment come from? I wonder if you meant it for another blog! :O

Yeah, don't particularly want to walk in the fields where water buffalo roam!

There are indeed water buffaloes in Hong Kong -- and agricultural land. But like I wrote in the entry, the paddyfields around Pui O have long been abandoned.

True enough re there being beauty amidst dirt. :)

Am glad you feel you always learn something new here -- and definitely would encourage/hope that you visit often. :)

Dirty but not ugly, right? ;b

Thanks for reading as well as looking -- and hope you have a good weekend too. :)

Great shots for the theme. The blobs on the field... fresh and natural fertilizer.... people pay for this stuff in bags. ;)
My take on dirty is here.

It doesn't look dirty at all, I have seen worse, lol !

Guess that it's a case of one animal's mess is another's handy stuff! :b

I have seen worse too -- but don't want images of them dirtying my blog!!! :D