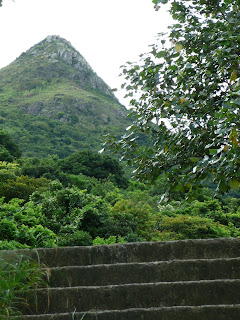 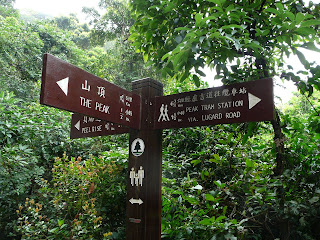 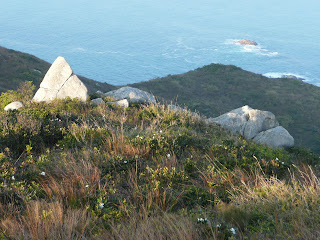 Due to my having movies -- particularly, those showing as part of the Hong Kong International Film Festival -- on my mind these past couple of weeks or so, I've neglected my other extra-curricular activities and interests, including hiking. Thanks to this week's Photo Hunt however, for giving me an excuse to put some green photos up on this blog -- since one does encounter a number of triangular objects when out hiking here in Hong Kong.

Among other things, some of the peaks one sees -- e.g., High Junk Peak -- are so angular (and steep) that they really do resemble triangles. Then there are the triangles that can be found on the often very useful and reliable directional signs erected by Hong Kong's Country Parks authorities (like that to be found in Pokfulam Country Park).

Less common (and thus really cool to come across) are rocks which have been naturally shaped by such as wind and erosion into near perfect pyramid or triangle shapes. The example in this Photo Hunt entry's bottom photo is to be seen as one descends down Tai Leng Tung along the Lung Ha Wan (trans. Lobster Bay) Country Trail that also includes an ascent up that 503 meter hill (mountain?) that is Hong Kong's 45th highest peak. (And yes, I do reckon that the beautiful views to be had from the top really are worth the effort of the hike up -- and then down from -- there! :b )

Nice theme for this week.

Pretty steep! You weren't planning on going up there for a hike I hope :P

Interesting to see the triangle-formed rocks! I love your green photos! I have been to HK many times but unfortunately I have never been able to visit any parks. I´m longing for chlorofyll colours now. This morning I found small green leaves on the hedge...*smile* Every morning I run out to look for spring-news!

Beautiful photos! And triangles in nature are a great take on the theme.

So cool! Leave it to Mother Nature, I always say...

Very nice findings ! Hadn't thought about the top of a mountain !

That scenery is ruggesd but so beautiful. Have a great weekend!

Thanks -- but tnchick chose it, not me!

Actually, I am... though maybe not all the way to the top! ;b

I miss natural greens if I don't see them for a while too. Fortunately, I often just have to gaze up at the hills when that happens! ;)

Thanks for both liking the photos and their subject matter. :)

I was thinking about the tops of certain buildings in Hong Kong but thought I might as well throw in some green into the equation this time around. So... :)

Agreed and hope you have a good weekend too. :)

Too high and steep, I would be breathless half way up the mountain. :P

Beautiful photos of the mountains!!!

My photo is posted. It's an all time favorite photo I scanned from years ago...there's just GOTTA be a triangle in there somewhere. I had to post it....goes with the holiday weekend too well, to not post it. Come on over...have a glorious, peaceful weekend my photo hunting friend!!!!!

somehow the thought of you in hiking gear toting a camera up n down a hill hunting for pics seems so humorous to me :)

Like the rocks on the top of the mountain in the first photo. The triangle in the third photo looks like a jigsaw puzzle. hehe-did you and your hiking friends put it together...hehe probably not as the rocks look mega heavy ;-)

AH, great choices for this theme! The big rock is specially stunning!

So did you get any fitter after this? Haha :P

Those are fantastic views and great shots for the triangle theme. I hope you have a happy Easter Weekend!

These are stunning photos. Nicely done on the triangle theme.

Nice entries dear good choice for the theme. Happy weekend. Mine is ready.

Believe it or not, often times, it's coming down the mountain that's the more challenging part... ;S

Teeheehee re your desperation at getting people to see triangles in that photo you posted! (And yes, I did go over and visit.) ;D

Why? I do it all the time actually! ;D

The rock is also way bigger than you might think too! :DDD

Undoubtedly! Hiking is good for one's health -- my physiotherapist said so!! :b

Thanks and hope you have a good Easter weekend too. :)

Thanks and I'll be popping over to your blog soon! ;)

Lovely shots! The mountains look furry with foliage. I hope you have a chance to see mine.

Have a great weekend. He is risen!

I love your collection. I particularly like the last one, and it reminded me that I have one very like that (even if the rock is a dingy grey!) and I never thought of it!!!

this is great. i love hiking too..it is just relaxing

Wow! I love your triangles from nature. Those are pretty amazing.

I was wondering if someone would put up a mountain which is often a perfect triangle. Love the triangular rocks.
Happy weekend to you YTSL.

like the natural triangles :)
thanks for dropping by my blog.

Love your take on this weeks theme. Great photoa too!

I found it hard to find triangles in my house this week but I did finally find some.

Mine's up and ready...come on over!

Wow, beautiful naturals! Thanks for stopping by.

"Furry with foilage" -- that's an interesting phrase that I've never seen before! ;b

Yeah, have to say that the third photo's my favorite of the three too... but couldn't resist putting a couple more photos into the entry. :)

Yes, agree that hiking can be relaxing. It can be hard work but being out amidst greenery does de-stress.

Oops... you didn't leave your name, so can't figure out which blog that I visited was yours! ;S

Thanks and yep, did go over to your place/blog! :b

Thanks, and you're welcome. :)

i like the last one. the triangle stand out for me.

thanks for visiting mine. happy easter!

Yeah, I too agree that the third picture is the best but also put up the two other pictures so I could have a more rounded hiking triangle story. :)

Hi Yvonne, I AM BACK (from Mars). Hehehe.... Anyway, good shots as usual. Happy working (=

Welcome back! Seems like you disappeared from cyberspace as well as the Photo Hunt for a time!!