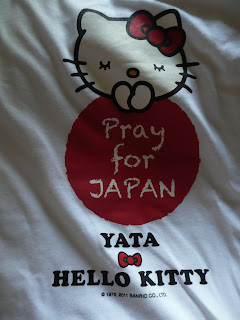 Kawaii-neh! A particularly cute Hello Kitty (I can't help
but want to make awww sounds when looking at those paws)
on a t-shirt sold to raise funds for Japan disaster relief 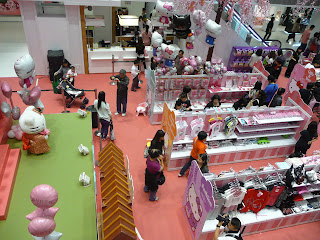 Last night, I watched a film at the InDBear Film Festival directed by Singaporean filmmaker Han Yew Khang (who also was responsible for When Hainan Meets Teochew, which I enjoyed viewing at this year's Hong Kong International Film Festival). Love in a Cab is a more conventional romantic comedy -- not least in terms of it having two good-looking leads in Joanne Peh and Julian Hee and its story having a development arc that recalls many other romantic movie, including Turn Left, Turn Right (which director Han openly acknowledged to have been a major influence on him at the post-screening Q&A session last night).

To their credit, Love in a Cab's main actress and actor possess good on-screen chemistry and manage to make the characters they play appear very likeable and endearing. And while it was clear from the screening and at least one question asked during the Q&A that Joanne Peh has her fans, Julian Hee it was who stole the show for me -- and indeed, those who know me will realize how smitten I was by the film's male star and the character he plays in the movie when I state that I found him/them almost as cute and lovable as Hello Kitty and Dear Daniel!

On the subject of Kitty Chan and her tuff-haired beau: I have to admit that I also thoroughly enjoyed their showing up and having not insignificant roles in the work. (And for those who think this is a weird segue/development, here's serving a reminder/bringing to attention that Singapore was the country whose people temporarily went crazy in their bid to get Hello Kitty plushies being offered for a limited time by McDonald's back in 2000 -- and that the film specifically references that event!)

In any case, seeing Hello Kitty (and Dear Daniel) on a big screen last night also got me thinking that it's been a while since the furry feline made an appearance on this blog. (In fact, a scan through my records shows that Kitty Chan has only made one appearance thus far this year on this blog!) So I figured that I'd help remedy this situation by reporting my glee at finally becoming the owner last week of a Hello Kitty Prays for Japan t-shirt -- close to two months after I put in an order and paid for it back in April.

Why the delay? Because these t-shirts were so popular that the organizers of this particular Japan disaster relief effort ran out of their supply of these pieces of clothing with Hello Kitty's visage on them being sold for a good cause -- and way sooner than anticipated!

Thus it was that one evening in April, I found myself wandering about the Hello Kitty-fied section of a new department store in a daze and state of disbelief... that there simultaneously was so many Hello Kitty items on sale in that store but the one thing I really, really wanted and had gone out of my way to the store to get was something I would have to wait around two months to get my hands on!

Fortunately, when I communicated my agony (via phone text messages and calls) to more than one friend that evening, there were some who were sympathetic as well as others who just found the situation laughter inducing. But that's Hong Kong for you -- in that the land that shares its initials with the cute cat really does have a significant number of adult fans of Kitty Chan. And should you doubt my assertion, just take a look at the second photo at the top of this blog entry... and consider that the Hello Kitty T-shirts that became out of stock so fast were all adult-sized ones! :)
Posted by YTSL at 10:01 PM