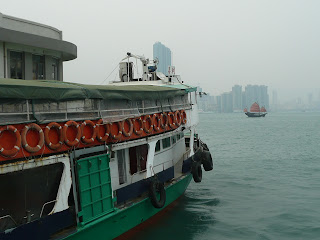 Workaday vessel (a Victoria Harbour ferry) in the foreground,
junk trip junk (specfically, the Aqua Luna) in the background 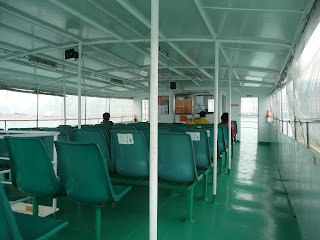 I recently returned to Hong Kong from a place where good public transportation is (still) not a given and I had to rely on the kindness and charity of family and friends to get about. While Penang is not without its attractions (including some of the most delicious food in the world), it undisputably loses to Asia's World City in the public transportation department -- and it really is the case that whenever I return to Hong Kong after a visit to my homeland, I always feel that I suddenly have legs and am able to (more) easily move about on my own again.

Of all of Hong Kong's public transportation, I use the MTR and buses the most. But while I value them (and, also, the minibuses and trams that I do take every once in a while), I must admit to feeling that there's something special about the Big Lychee's ferries -- be these the famous Star Ferry or other aquatic vessels plying routes that include those between Hong Kong Island and an Outlying Island, ones that cross Victoria Harbour multiple times each day or something else altogether.

Hence my feeling sad upon learning that in March of this year, the Star Ferry decided to terminate its services between Central and Hung Hom and Wan Chai and Hung Hom in one fell swoop -- and somewhat guilty for never having showed my support for them by taking a ride on one of a ferry plying one of those routes.

Consequently, I have determined to support the remaining ferry services by not only taking the Star Ferry between Wan Chai and Central whenever convenient (which actually is quite often -- not least since I do attend my share of concerts and shows at the nearby Hong Kong Cultural Centre!) but, also, checking out and going on trips on other ferries that cross Victoria Harbour several times each day.

Some time back, my much-travelled friend Daisann McLane divulged in a National Geographic Traveller article that she has a soft spot for the ferry that goes across Victoria Harbour between Sai Wan Ho and Sam Ka Tsuen (near Lei Yue Mun) operated by the Coral Sea Ferry Service. While I have yet to venture on board that particular ferry, I have availed myself of First Ferry's service between North Point and Kowloon City and Fortune Ferry's service between North Point and Kwun Tong.

Perhaps it was on account of my having taken it on a non-rush hour portion of a week day but the Fortune Ferry service between North Point and Kwun Tong was the least crowded vessel I've ever been on board in the Big Lychee. Add in a waiting room on the North Point side that was quite surreal in terms of it feeling like quite the laid back as well as amateur operation and I think the whole journey can be recommended as a novel Hong Kong experience -- one that appears to be off the beaten path for residents and visitors alike!

Upon factoring it being so that both the North Point and Kwun Tong ferry terminal are near bus stops from where one can embark on long rides to other parts of Hong Kong, I reckon that an interesting day of exploration can be had that includes this ferry trip across Victoria Harbour; especially for those who enjoy hopping onto public transport and seeing what sights are to be had along a chosen route. In addition, while the cross harbour ride is itself on the short side, the feeling one gets when floating on that scenic body of water often can be an evocative highlight by itself even for someone who has been a resident for more than four years now of the territory whose name translates into English as "Fragrant Harbour". :)
Posted by YTSL at 11:03 PM

I didn't know about the Star ferry cutting services YTSL, is it purely due to the lack of usage or is the Star ferry in trouble? We did the Hung Hom to wan Chai ride once, and we waited ages for it. Great post!

Love the first photo with the clarity of the ferry, the foggy buildings in the distance and the traditional Chinese Junk midway.

The lack of people on the North Point-Kwah Tong ferry is a bit spooky.

I was inspired to check out the ferry crossings in my area from Vermont to New York State. I may check out one of them tomorrow.

I see your back up and running.
I don't believe there no prefect way of running public transit.
In our small community there nothing. Except the senior bus and I'm not sure how that works.

I think it's both of what you suggest: i.e., lack of usage leads to decreased financial dividends for the Star Ferry. More re the Star Ferry: the change in location of the Central pier has negatively affected its passenger numbers. And these days, there are fears that proposed moving/revamps of the TST Star Ferry pier will have the same result. :S

Am glad you like the first photo and heheh re your comments re the second photo. The lack of people was unusual but not that spooky, really -- truly, I have been in many situations in Hong Kong where crowds have not formed! ;D

More than BTW, didn't know that there were ferry crossings from Vermont to New York State. Hope that should you go and check them out that they'll make for great photo ops! :)

Sure there's no perfect way of running public transit but, honestly, Hong Kong seems to do it better than most -- if not all -- other places I've been! ;O

Wow, I didn't know that YTSL, where are they thinking of moving it to in TST? I know it upset many people when they moved the old central one, and although the TST one looks a little rickety it would be a real shame to lose that as well!

Oops, I wrote too fast. Actually, what it is with the TST Star Ferry Pier is that the powers that be want to move the bus terminus near it -- something opponents of the move fear will lead to decreased passengers for the Star Ferry.

I love ferries too, but was often nervous taking them in places like The Philippines and Indonesia. Also buses in Nepal. Hong Kong on the other hand, I am sure that they are well organised and safe.

Yes, I think one can trust Hong Kong public transportation -- including its many ferry and kaito services -- to be safe. :)