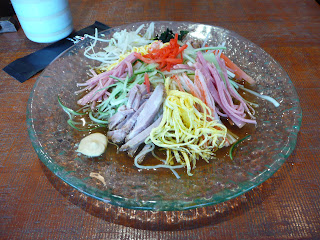 A colorful dish for the summer 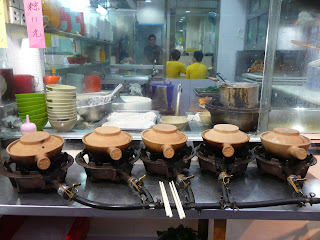 Hot food available throughout the year in Hong Kong
but best enjoyed during cold weather
In no small part due to Le French May's gem-filled Noir film program, I have been frequenting the Broadway Cinematheque in Yau Ma Tei quite a bit this past month. And as it so happens, my usual route between the cinema and the public transportation stop (be it the MTR or bus) takes me through the area where the Four Seasons claypot rice eatery is located.

But despite the eatery's name and it being my favorite place in the whole of Hong Kong to partake of claypot rice, I haven't felt seriously tempted even once to stop there on the way to or back from the cinema -- because I've come to think of this substantial dish as one that's best consumed in the winter months rather than after summer has most arrived in the Big Lychee. (And to judge from the relatively low number of customers it has been having lately, this is a feeling that's shared by many other Hong Kong residents.)

Instead, during this hot and humid season, I'm more wont to crave another dish that I also first got to know in Hong Kong: hiyashi chuka, a cold noodle dish that the Japanese think is Chinese -- indeed, its name apparently translates into "chilled Chinese"! -- but is actually a Japanese invention (or, at least, innovation). (Adding to the cross-cultural mix is the fact that I was introduced to this very refreshing concoction at Ajisen Ramen, a ramen noodle chain that was established in Kyushu but whose Fragrant Harbour franchise is China-owned!)

Often when I order this particular noodle dish, it's because the heat has made me not have as big an appetite as would be the case in the cooler months. Yet, it usually only takes mere minutes for me to polish off the portion of hiyashi chuka that I get served! For while it's true that I sometimes actually find myself thinking for a second or two that, with its colorful variety of garnishes (that include green cucumber, yellow egg and pink ham) it's almost too pretty for me to dig into, the fact of the matter is that I have such strong memories of how delicious it is that physical craving easily overwhelms aesthetic considerations and appreciation as far as this dish is concerned!! :b
Posted by YTSL at 10:37 PM

Wow, that is a colorful dish! At first glance, it looked more like a pile of ribbons to me than food.

Funny about it being a Japanese dish that is believed to be Chinese in Japan. It's the sort of thing that makes me wonder how many Americans think that French toast is a French dish...And then it also reminds me of a friend of my encountering a pizza once--in Japan, I think--called "the American," or something like that. It listed squid among its toppings, which, as I'm sure you know, very few Americans would consider even having in the same room with a pizza.

Both photos make me hungry.

Here in Vermont we have occasional very hot,for us,days during summer when the food in the top photos would "hit the spot". We also have some cool evenings when claypot rice would taste good too.

Adding to the discussion re food that people from the place it's named wouldn't recognize: in Malaysia, there's a dish called Chicken Maryland that consists of fried chicken, sweet corn fritter and fried banana among other things. I don't think I ever saw anything like that on a restaurant menu on all the occasions that I visited Maryland! :b

How hot is "very hot" in Vermont? Especially in view of your winter blog entries, have a hard time imagining it getting all that very hot in Vermont. OTOH, I know from experience that Wisconsin can get really hot as well as super cold. So... ;b

In Japan Vermont curry is popular. You can also buy it in small cubes to make at home. I was told the person who came up with the idea visited Vermont and liked the apples. The curry has a slight apple taste.

Aomori Prefecture in Japan is famous for their apples (very good I might add)but maybe Vermont sounds more exotic in Japan....

Wow, that's quite a summer temperature range you have there in Vermont!

And hehe, yeah, I think Vermont sounds more exotic than Aomori in Japan. Maybe they should add a bit of maple syrup to that Vermont curry... ;b