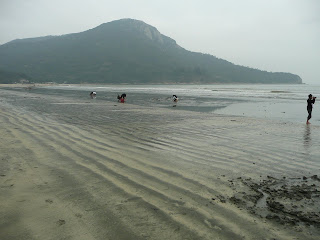 No, your eyes are not deceiving you... 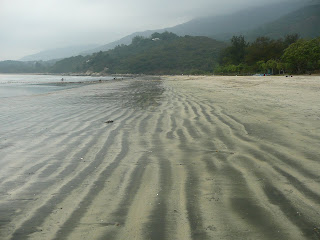 ...rather, the sand at Pui O beach really is
alternately (and naturally) yellow and black!

Strange but true: even though it's not quite optimum beach weather time yet here in Hong Kong, the past two weekends have seen me going on outings that have involved spending some time at the beach. Last Sunday, it was a hike in Sai Kung that led my regular hiking companion and I in and out of Tai Long Wan. Earlier today, it was an afternoon spent further exploring Pui O, an idyllic village in southeastern Lantau whose charms my regular hiking companion and I belatedly "discovered" some months back over the course of hiking Lantau Trail Stage 12 from Mui Wo to Pui O ((i.e., in the reverse order from the official route).

The one and only previous time I had been to Pui O, I had ventured to only a short side stretch of its beach. This time around, I spent some time walking along the bulk of the beach -- which I was surprised to discover not only only had black sand but strips of beach where the black sand alternated with more regular colored yellow sand to produce a series of eye-catching stripes that almost looked too cool to be completely natural!

As far as I can recall, this was the first time I saw a striped beach. On the other hand, although I've not been to beaches that appear to be entirely black sand beaches such as Hawaii's Punaluu Beach, Wainapapa Black Sand Beach and Kehena Beach, I have been to a couple in Asia whose black sand is their claim to fame and have given them their name (in the local language) -- namely, Pulau Langkawi's Pantai Pasir Hitam (whose sands are mixed with burnt rice, according to local legend) and Macau's Hac Sa Beach (which the local government has unfortunately mixed with yellow sand from elsewhere to help compensate for the beach's natural erosion).

If truth be told, although it does have its photogenic charm, I'm not sure that I'll be rushing to visit Pui O Beach again any time soon. To be fair though, I'm sure that it'd be more attractive in sunnier weather and under bright blue skies. So maybe this beach -- which looks to attract its share of clam diggers and birds (including seasonal egrets and swiftly-scurrying sandpipers) even on a cloudy gray day like today largely was -- should be a place that I should mark down to visit when summer finally comes along after all...

What an unusual sight! I thought at first that I was looking at long and deep ripples. You're right, that would be spectacular in sunlight.

The more I think about it, the more I am thinking I *should* go back to Pui O one sunny day... ;b

Wow, a striped beach! I've yet to see a black sand beach in person, but it is on the list.

Well, maybe when you finally come over to Hong Kong, you can visit Pui O Beach as well as go hiking on Lantau (home to Pui O Beach and many good hiking trails) and elsewhere :)