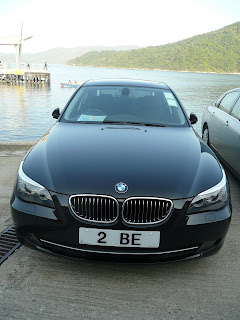 Spotted at Wong Shek Pier up on the Sai Kung Peninsula a while back... a sight that made me and my friend who saw it simultaneously think "how philosophical" and "I guess the Bimmer's owner's message might also be along the lines of "how great it is to be rich"!" (And additionally on my part -- here's something I can use for that Photo Hunt license plate theme!) At the same time, because the car bearing this license plate was parked near a public pier located in close proximity to places where people go hiking or do water sports, we also decided that the overall message could be "To be financially well off doesn't mean not being able to enjoy free fresh air, the outdoors and sporty pursuits"! :D

Of course, the more you think of the particular words on that license plate, the more associations you make with it. Among the others that have entered my mind: Hamlet's "to be or not to be" soliloquy (which I had to study at school in England, and also was fortunate to hear being uttered on stage at Stratford Upon Avon); and Cat Stevens' lovely If You Want to Sing Out, Sing Out (which I was introduced to one hot summer's day in Colorado where I was at archaeological field school) with its "if you want to be free, be free, 'cause there's a million things to be, you know that there are" lines. :)

On a more sobering note, the events of the past week and a bit more in Japan also have got me thinking that "to be" also denotes survival. Not quite "to live" (somehow, "to be" seems more passive, doesn't it?) but still at least "to exist". And as the recent major disasters that have befallen the country many people (including myself) would have picked to have been the most capable of handling earthquakes and tsunamis (and even nuclear power plant crises) also have shown, to be -- as in continue to exist and survive -- sometimes really can be a major achievement in itself. And the first step on the road to renewal and recovery. Gambate, Nippon!

Hi YTSL, that is a great photo and an interesting take on this week's theme. Associating the message to "how great it is to be rich" would've been my initial association too. :) I also look at things I see and photograph as possible PH subjects. he, he.

All of your other associations are very interesting and thouught provoking. I'm not familiar with Cat Steven's song but now I want to look it up for the lyrics.

wow that is awesome only few digits of license plate. Jappy hunting. Mine is up.

Thoughtful post here YTSL. And great photo to start you off. Happy weekend.

or not 2b?!
lovely find and capture

very cool license plate. this is one of the best entries i've seen today.

When I first saw the photo my mind went to Shakespeare, but you are right it could mean many different things.

Glad you like the photo and what I wrote. Re the Cat Stevens song: it appears in the movie "Harold and Maude" too. :)

I have a feeling the owner actually wanted "To be" but ended up with "2 Be" -- one fewer digit/letter on the license plate! :D

Thanks for looking and reading. BTW, are you a Photo Hunter? If so, sorry I couldn't return the visit -- when I tried to get into your blog, was blocked off. :S

Thanks! And there I was thinking my entry would be boring compared to the American ones with their cool license plates that differ from state to state... :)

Amazing the variety of associations that one can make with something so small, right? :b

Great take on the theme and I would probably have assumed the owner of the car was either an actor, director or a Shakespearean professor but interesting how many different ideas you came up with for the meaning. Happy weekend.

I associated '2 Be' with my status five years back, when I was a grandfather to-be. Now I have two grandsons - aged 5 and 3.
One can't remain unmoved by what our Japanese brethren are going through. Nice of you to have brought that up in your post.

It should really have said "to beem"...

Wonderful Capture. I thought of all the clever license plates I have seen over the years and never took a picture of them...Love the post and your thinking of 2 BE...thanks for coming to see mine...

(Is anyone else having trouble posting on tnchick's page. I haven't been able to leave comments to get my blog post on the list.)

funny how that one license plate can conjure up self examination. how clever is that owner, clap clap.

2 Be is a great affirmation. and when you can afford a bimmer, 2 BE it is, no question about it.:p great find for the theme..

License plates with significant numbers cost a bomb in Hong Kong. That's my impression when I heard my Hong Kong friends tell me how much they pay for numbers like 8 or 9.

Please feel free to check out some of my other Japan-related entries this week. Japan and its people have definitely been in my thoughts this past week and a half. I really do feel for them and wish them well.

Well, according to BMW enthusiasts, beemers are BMW motorcycles! So... :D

Didn't have problems posting on tnchick's blog. But have noticed a few glitches involving it since it moved to a different host!

Teeheehee and what a generous evaluation of that car's owner. :)

Well... my own personal preference is to go with Cat Stevens and sugggest that "there's a million things to be, you know that there are"... :D

...which is why most people don't think to try to pay (or, rather, bid in an auction) for those license plates!!! :D

Great find for the theme and interesting thoughts, too.
Happy weekend (Fuerza, Japón)

Yes, I imagine that not everyone could afford a license plate like that one! Great capture for this week's theme.

Aaah... was wondering if it was the license plate of Andy Lau's "A Moment of Romance" motorcycle or some iconic Hong Kong movie vehicle! :D

Thanks for looking and reading. And re Japan: yes, let's hope and send good vibes over there!

Add in Hong Kong's relatively small car:population ratio... so much so that the majority of Hong Kongers don't know how to drive a car!