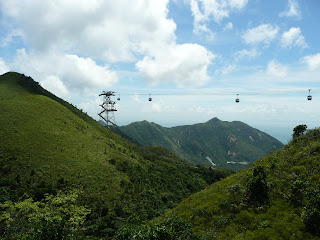 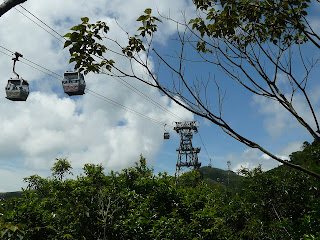 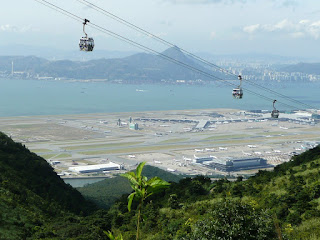 Sad but true: when many people see the word caged in Hong Kong, what will come to mind first is the existence of people known as cagemen -- whose terrible living conditions was the subject of Cageman, Jacob Cheung's 1992 Hong Kong Film Awards best film winner -- more than cages that house animals.

At the same time, since I prefer to see wildlife living in the wild -- this admittedly even more so after having had the experience of going on safari in East Africa (first in Kenya, then subsequently in Tanzania) -- I have not been to a zoo in decades. (Indeed, the zoo part of the Hong Kong Zoological and Botanical Gardens is pretty low in my list of places in Asia's World City to visit.)

So I was wondering how I could participate in this week's Photo Hunt -- until I was leafing through the set of photos I took on my favorite hike of 2010 -- along the Nei Lak Shan Country Trail that yielded great views of the Ngong Ping 360 cable car as well as Big Buddha and surrounding countryside. More specifically, I got to thinking that the each of Ngong Ping 360's cabins physically resemble cages -- and it is true enough that they are designed so that once you're inside, you can't get out of them by yourself! :D

In any case, I figure this is as good an excuse -- and opportunity -- to share a few scenic photos of Hong Kong with those who visit this blog. So I am trusting that you guys and gals will be okay with this creative interpretation of this week's Photo Hunt theme... ;b

and you are spot with all your guesses on my post!!

Actually it is a great way to deal with this theme. Although I am a zoo person, I do have some misgivings but San Diego is the best of the best.

Great. A lot better than some of Jams' lame excuses. Most of my trips in vehicles like that have been to ski. Nice way to not have to slog your way to the top.

I was expecting to see caged men in your post due to it being unique in Hong Kong. *disappointment*

Are there still such people in HK? I hope living conditions have improved.

I enjoyed the Ngong Ping ride. it shows the magnificent natural scenery of Lantau and your photos bring back wonderful flashbacks of my trip.

i've always wanted to ride a cable car in HK, sadly when i had some free time, i was too tired to even get up.:(

i love seeing animals but a visit to the zoo always depresses me. i wish there are other ways of taking care of endangered animals.

Great take on the theme, YTSL! the same applies to skiers (like me) going up the hill ;)

A clever way to deal with the idea of cages! These scenic cages help us to travel securely from a great height! These are good cages!

Those are wonderfully scenic views and a pleasant take on the theme. I think caged has a lot of unpleasant associations in general so nice seeing some pleasant ones.

Its a lovely take on the theme, and what stunning views! :)

Yes, you are cganed in when you ride in those!

Good shot for this week's theme.

I agree with Carver, I like your more positive interpretation of this theme and what glorious views!

I think it is right on the mark for this week's theme. Gondolas definitely feel like a cage but I'm usually happy to be caged in when I'm that high up. I love the last photo of the vista. I can see why this was one of your favorite hikes.

Thanks for appreciating my take on the theme and yay re my guessing right over on your blog! :)

The San Diego zoo does look much better/more humane than most others in your photos.

Teehee, have to say that many of Jam's creative interpretations do make me laugh. :)

Re Ngong Ping: There's also public buses that can take you up to the plateau. :)

Yes, there unfortunately still are cagemen in Hong Kong -- and I have to say that I don't think I'd have the heart to take photos of them... although if you click on the "terrible living conditions" phrase, you'll get to a previous blog entry of mine with a photo that might satisfy your curiosity.

Especially if you're here on a beautiful week day, would recommend the Ngong Ping 360 ride. And once in you're in Lantau, you can also visit either Tai O or Cheung Sha Beach along with the Big Buddha. Top it all off with dinner at Mui Wo (I recommend the Turkish restaurant there) and it should be a good day out. :)

I've never ever skied. Sounds like it could be fun but also dangerous (to one's bones, if not life)! :O

By sad, you mean about the cagemen? If so, yes, definitely. :S

Glad you like the photos. Photo Hunt's a great excuse for digging through my photo archive and finding photos to share. :)

Thanks for approving of my alternative take on the theme. :)

To add to your appreciation of the views: FYI, the third view has Hong Kong International Airport in the immediate background. :)

Thanks for agreeing that the cable car cabins qualify as cages. :)

Thanks for appreciating and understanding the reason for my choice of way to approach this week's theme. :)

At some point, will post photo-essays for the hike. When I do, hope you'll visit and check them out and enjoy. :)

Hi YTSL, a wonderful interpretation and take on this week's theme. The views are so beautiful.

Yes I had the same feeling of being caged when I took a ride of the Ngong Ping 360 cable car during a winter night - total darkness and felt very unsecured.

Not a very good feeling ;)

Glad you like this entry and happy weekend to you too. :)

Have never a ride at night on Ngong Ping 360 but have done so in Seoul and Taipei. The cable car ride in Seoul was fine but the Maokong cable car ride in Taipei was scary -- the winds were blowing so LOUDLY and our cabin felt very light in the wind... ;S

When I did the cable ride a couple uyears ago it was so hazy..thanks for showing me what it really looks like!

Oh dear re it having been hazy when you went on the Ngong Ping 360. Definitely recommend your going again on the cable car on a sunny, clear sky day -- or hiking around in that area! :b