Japanese encounters over the years 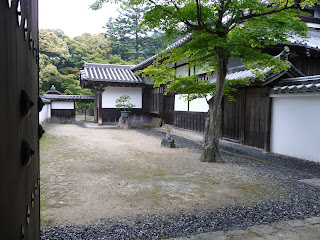 Peaking through a gateway into an inner part of
the Engyoji Temple complex on Shosa-san
As regular visitors to this blog realize full well, I love Hong Kong. But Japan is the Asian country I feel much more culturally partial to rather than that which the Big Lychee is a Special Administrative Region of.

Considering my ancestral and ethnic roots, this may come as a surprise to some people. But the truth of the matter also is that I paid my first visit to Japan decades before I visited any part of Mainland China and met my first Japanese person and friend several years before I met the equivalent from Mainland China.

A fellow pupil of the kindergarten section of an international school I attended back in Penang was the very first Japanese person I got to know and became good friends with. "Shin-ieh" was how I remember pronouncing the name of the boy who became one of my two best friends in that co-educational establishment. And I also will never forget how we, his classmates, were utterly envious of his super cool Japanese stationery -- which, to his credit, he regularly very generously shared with us as much as he could. And yes, I do also remember him as being the smartest kid in class -- even though he was far from being your stereotypical nerd! :D

Years later, at Beloit College, I got to know three Japanese students in my class. Two of them, Mio and Hiroshi, were exchange students from Waseda University in Tokyo -- and two more opposite characters you could hardly find. Not only was one of them female and the other male but one loved sushi, the other professed to hate it, one was super hardworking while the other was extremely hedonistic, etc., etc., etc.

And then there was Chika, the amazing person who had come to college in Wisconsin by way of international schools in India and Thailand as well as presumably regular school in Japan, could speak nine different languages (Japanese, English, Thai, two Indian languages -- including Hindi, German, French, Italian and Arabic), play five different musical instruments (including the piano and saxophone) and had the kind of amazing energy that threatened to drive me -- her room-mate for a semester -- crazy.

To give you an idea: she'd be studying when I got ready to go to sleep and by the time I woke up the next morning, would already have gone for a long jog and practiced the piano, among other things! But every once in a while, she'd sort of run out of batteries. Just before doing so, she'd return to the room, say "I'm feeling tired" and promptly collapse on the bed and fall fast asleep, with all of her clothes and even her shoes on -- leaving me to remove her shoes for her and tuck her in... and to complain after she woke up that she made me feel like the wife of a workaholic salaryman!!! :D

Considering how parochial and mono-cultural is the reputation of the Japanese nation as a whole, I find it somewhat ironic that I've gotten to know quite a few international-minded and -living Japanese people in far flung parts of the world. And yes, even in Tanzania, I got to know another Japanese -- an embassy official who had actually gotten a degree in Kiswahili and had a deep love for Tanzanian arts and culture. And Eiko, if you ever read this, I still do fondly remember the day we went together to Bagamoyo where, in addition to visiting historical sites, we also went over to the late, great musician Hukwe Zawose's house and were treated to an impromptu concert by his father and son. :)

More recently, I've been privileged to meet some Japanese business colleagues turned friends of my father -- a couple of whom my family believe really started warming to us upon discovering our mutual love of Totoro and things Studio Ghibli by way of being introduced to my Totoro plushes (including the three foot tall and wide and four foot tall and wide ones!); and one of whom would go on to help me to get a precious ticket to the Studio Ghibli Museum on one of my later visits to Japan. :D

The proverbial "they" say that when you are facing death, your life will pass before your eyes. Although Japan is hundreds of kilometers away from Hong Kong and I don't feel personally threatened by the terrible disasters that have taken place on Honshu in the past few days, seeing on TV and reading about what has transpired there has got me reflecting on and fondly remembering the Japanese people who have made an impact on my life over the years -- and sincerely hoping that they -- many of whom I regret to say that I no longer am in touch with -- have not fallen victim to the multiple whammies that have hit Japan recently.

And if by any chance they ever come to chance upon this blog entry, here's saying thank you for the memories, hope you and your loved ones are well, and I hope our paths will cross again some time in the future in happy circumstances.

Lovely post. The images of the quiet calm and order that citizens of Japan have shown during this disaster have moved people all over the world but particularly, I would think, those like you who have had close cultural connections with Japan.

And while it is only a footnote (if that) I found it heartening that the South Korean Government was sending relief teams and planeloads of supplies but that college students there are running fund raising drives for the stricken island nation.

Very touching, YTSL. And it also conveys one of the qualities I admire most about you: your respect for and genuine interest in people and cultures from all parts of the world. And although I know you can fiercely proud of your hometown cuisine, I like to think that you define yourself by your humanity and not by your nationality, ethnicity, or religion. That is a quality the world needs more of.

Hi YTSL, this is a very beautiful post and thank you for sharing some of your fond memories of your friends that you've met over the years. I was very moved and touched reading about them. I really hope that they and their loved ones are okay.

Much love to the people of Japan.

And yes, the images of quiet calm, order and endurance in trying circumstances and times have moved me -- to public tears even. There really is so much in Japan and the Japanese people that should be examples to us all.

Also, yes, am heartened to learn of such as the South Koreans and Mainland Chinese extending help to Japan.

Thank you so much for your kind words. And yes, rest assured that I do indeed consider myself a human first and foremost! :)

You're welcome and I'm glad that this post has struck a chord in other people. And yes, I consider myself for having met many wonderful people in many places over the course of my life -- it's just that what with my having been such a rolling stone, I've regretfully lost touch with too many of them over the years... :S