Another 2011 HKIFF report (The not so viva edition) 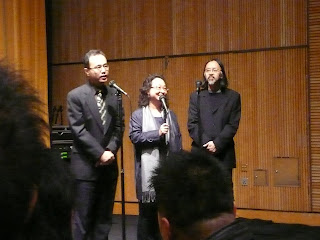 Director Cheung King-wai (far left) answers audience queries
after the world premiere screening of his One Nation, Two Cities
Chalk it down to my being a glutton for punishment -- or just a fanatical movie geek. For despite having being down to view four Hong Kong International Film Festival screenings this weekend, I couldn't help but also go to the Cine Art House to check out Road to Dawn, a 2007 Mainland China-Malaysia co-production focusing on the time that Dr. Sun Yat Sen spent in Penang directed by Hong Konger Derek Chiu and starring Taiwanese actor Winston Chao.

Any review of that movies will have to wait for another day, however -- as this time around, my focus will be on the film I viewed before it and that which I viewed after it; both of which have little in common with each other besides the fact that they both are part of this year's HKIFF programme (and attracted my attention and got me to part with some money to purchase tickets for admission to their screenings!):-

To whoever came up with the title from this movie: It seems you want the audience to cheer for Riva, the film's flamboyant protagonist who definitely is not without his share of physical charm. But if that really is the case, couldn't you have made him less reckless to the point of downright stupidity?

By this, I don't mean his having gone ahead and stolen some valuable items (in this case, a truckload of petrol-filled barrels) from his dangerous boss but, rather, his looking to have more or less completely let down his guard once he and his bounty made it across the border from Angola into his home country of Congo (formerly Zaire and -- in colonial times -- the Belgian Congo). Put another way: it's one thing to effect a heist against your employer when he's not looking but quite another to baldly risk getting tracked down and caught by him and his murderous henchmen because you've become way too fixated on spending your share of the takings on women, booze and generally having a good time.

What with Viva's successful theft taking up only something like the first five minutes of the film, much of the rest of it gets spent telling an essentially simple story of a man who becomes obsessed with a woman he doesn't really know (and turns out to be a local kingpin's moll) and whose open pursuit of her is so blind that he doesn't seem to realize (or care) that he is being intently pursued in turn by his vengeful ex-boss who is determined to reclaim what he considers rightfully his as well as make his former employee pay for having stolen it.

Even while I was not too enamored by the sex scenes (that were so powered by lust that they are among the most unromantic I have ever seen), I'm not going to blame them for my actually developing a migraine while viewing the movie. Rather, I think this was the result of the pulsating music that never seemed to let up -- some of which was energetically rhythmic but others of which came across as noise that looked to have not only affected my brain but drowned reason out of many of the movie's characters -- none of which, as a consequence, I was inclined to cheer for, let alone care for and empathize with.

My rating for the film: 5.5
One Nation, Two Cities (Hong Kong, 2011)
- From the Humanitarian Award for Documentaries programme
- Cheung King Wai, director

Before the screening of One Nation, Two Cities commenced, its director announced to the assembled audience that the film was completed less than 24 hours ago and that it actually had turned out to be 69 minutes in length (rather than the 100 minutes in length that it had been stated as being in the Hong Kong International Film Festival booking guide). The process of editing the documentary, he said, had presented great difficulty -- and it is interesting that at the Q&A session after the screening, he admitted that upon viewing the work, he thinks he had cut too much from the early sections of the film... and also that many of the questions he was asked concerned what was not in the offering (and whether those parts had never been filmed at all or had been cut in the editing room).

Although Cheung King Wai also stated that this version of his documentary about a Mainland Chinese woman who does not have Hong Kong residency status (despite her parents and her children having it) is his final one, I too am one of those who is of the opinion that perhaps the film would be better served by being re-edited -- and preferably, made lengthier. In particular, although the audience does learn quite a bit about the woman in question from the film (by way of interview with her, her uncle and a couple of friends and more), it really feels like a glaring omission that there is no interview footage with with her parents with whom she stays on her visits to Hong Kong and her ex-husband with whom she stays during her time back in her hometown in Mainland China.

Also at the post-screening Q&A, Cheung King Wai made what I thought to be quite a surprising as well as frank admission that he had found the woman at the center of One Nation, Two Cities to be thoroughly "commonly ordinary" and thus hard to make a film about. (This in contrast to the individual at the center of his previous film, KJ.)

To judge by the audience reaction, it would seem that many people agreed that she wasn't particularly interesting -- including in contrast to her mother who actually was the subject of more than one audience query. One reason might be that whereas it seems easy enough to understand why this documentary's central character would want to become a Hong Kong resident, the question of how her mother, whose brothers are all university educated, came to have a life in Hong Kong where she works as a cleaner and lives in impoverished circumstances (not to mention has a husband who seems disinclined to talk much at all).

All in all, too much felt like it had been left unsaid and unexplored -- or been left on the cutting room floor -- for this Cheung King Wai directorial effort to approach the level of his two previous works that I've seen (KJ and the earlier All's Well With the World). At the same time though, there's little doubt that he has once again commendably cast light on subject matter that doesn't usually get filmed -- which in this case includes broader social-cultural issues such as the effects on official government policies on individuals and their families, and also what appears to be a contemporary tendency in Mainland China towards having more and more families and marriages being broken up (be it by official policies or personal actions such as married men having affairs as was the case with the ex-husbands of the main woman in this documentary and her also divorced best friend).

Cheung King Wai's KJ is one of the best documetaries to have come out of Hong Kong. Sounds like his latest film (at least the version shown at the HKIFF) was a bit of a rush job, and could have been a fair bit better if the director had more time to work on it. What a shame!