Eating and strolling about in Macau 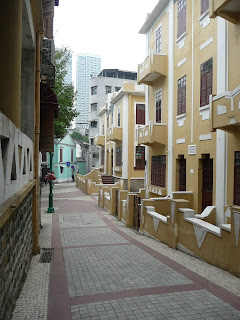 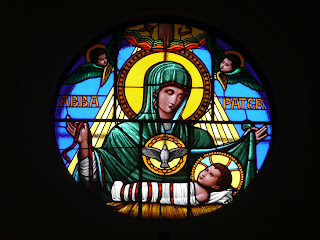 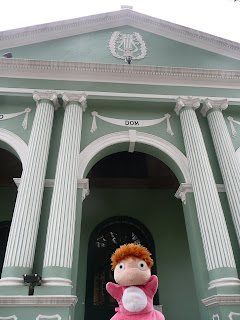 Puppet Ponyo posing in front of the
temporarily closed-for-renovation
Dom Pedro V Theatre
How now Macau! As much as I love (being in) Hong Kong, I do find it nice to be able to get away for a while to some place that is culturally and physically different from Asia's World City. So it really is a bonus that the former Portuguese enclave of Macau is just one hour by ferry away.

For while it now is a Special Administrative Region (SAR) of the People's Republic of China like the former British colony of Hong Kong, the Portuguese part of Macau's heritage remains very much in evidence in such as its traditional architecture, the surprising number of churches to be found in the territory (and particularly its historic center) and the food served at popular restaurants like A Lorcha, Fernando's and O Manel (all of which I've enjoyed eating at over the years). Additionally, in large part due to the majority of Macau's visitors being intent on frequenting its 33 casinos, its historic urban areas are pleasantly free of crowds for the most part.

What with today being my mother's birthday, I took the day off from work and took her (and Puppet Ponyo!) to Macau for a flying visit. Upon arriving in the territory, we headed straight to A Lorcha for a pretty substantial lunch of beautifully crusty bread, soupy clams spiced with coriander and garlic (yum!) and feijoada served with rice (yummy!). Feeling a need to walk off part of our meal afterwards, we proceeded to stroll along narrow, atmospheric streets that led us variously to historically significant Lilau Square, up Penha Hill to quiet Penha Church, down to picturesque St. Augustine's Square and its conglomeration of historic buildings including the Dom Pedro V Theatre, St. Augustine's Church, Sir Robert Ho Tung Library and St. Joseph's Seminary, and then to beautiful -- even when crowded, as is usually the case -- Senado Square.

Shortly after reaching Senado Square (or the Largo de Senado, as it is known in Portuguese), the eating began again -- even if it only was a double scoop of gelato from Lemoncello Gelato, a place that I discovered while researching a Macau food feature article for bc magazine a few years back and have made a point of revisiting each time I return to Macau. (This time around, I had a scoop of the peach and mango mix gellato and one of the coconut -- both of which were delicious; ditto with the pink guava flavored gellato my mother decided upon.)

Then, after popping into the Lou Kau Mansion next door for a look inside the historic house, a spot of food shopping at a branch of Koi Kei and quiet rest in the pretty back courtyard garden of the Leal Senado that few people seem to know exists, we decided that we were able to eat some more -- but not what would be served at an actual sit-down dinner. (Each time I head over to Macau for the day, I resolve to eat two full meals there but end up not being able to due to the lunch portions I get at my Macanese restaurant of choice being way too large for my comfort!)

So we hopped on a bus and made for the original Lord Stow's Bakery in Coloane where the most delicious creme brule-style egg tarts are to be found. (And yes, they really are worth the 8 Macau patacas per egg tart price and the more than half an hour trip there from the Macau Peninsula!!!)

By now feeling full and also somewhat exhausted, we decided to call it a day as far as our Macau sojourn was concerned. So it was back to the Macau ferry terminal and -- via another of those ferries that sails four times an hour for twenty fours between Macau and Hong Kong -- back to Hong Kong... a place that I found myself glad to be back again -- not least because, however polluted relative to many other places, its air actually feels fresher than that of its fellow SAR! :O

Happy Birthday to your mother. What a wonderful way to spend the day. Everything you ate sounds so good.Did you buy treats to eat once back in Hong Kong? I'm full just reading about all the food:-)

great Post YTSL, funnily enough I also went to Lemoncello Gelato on my last trip before popping into the mansion. I'd never been up that side street before. The Chinnery tiles are just a few steps away up the slope.

Thanks for the wishes. We did go food shopping -- my mother loves a kind of pickled ginger they sell at Koi Kei, so bought lots of packets for herself and friends back home in Penang.

Glad you like the post. I wondered if anyone would be interested in it but wanted to chronicle the day to remember it -- and this blog sometimes functions as a sort of online diary for me.

And yep, the Chinnery tiles nearby are the indeed the ones I recognized from the photos on your blog. :)