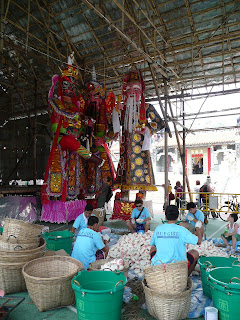 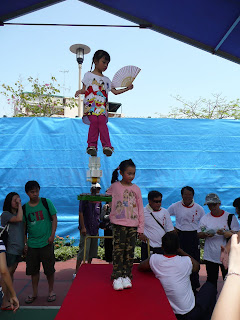 For more than a century (a very long time by Hong Kong standards!), the islanders of Cheung Chau have been honoring the god Pak Tai with an annual commemorative event that has come to popularly known as the Cheung Chau Bun Festival on account of one of its major activities involving a "bun snatching" competition whose contestants vied to remove as many buns as they could off giant bun-covered bamboo towers.

Visiting Cheung Chau last year on the weekend before the festival was due to take place, I not only got a good taste of what was to come a few days later but, also, a concrete idea of how communal at the core at this event which has become a major one on the Hong Kong tourism calendar still really is. Put another way: I saw many local folks hard at work preparing for the island's big day by doing such as baking the famous Cheung Chau buns in different ovens in various parts of the island, stringing the buns together (while being watched over by large, already standing paper-mache effigies of deities) and fixing the buns on to the bun towers.

Apart from the multitude of buns (on the bun tower or not), another novel aspect of the Cheung Chau Bun Festival is its parade of "floating" children where a number of preteen children appear to be performing impossible feats of balance -- and I was lucky enough that day to also see what amounted to a couple of practice rehearsals of that event.

And for those who haven't quite figured out what I'm referring to, check out at the second photo in this Photo Hunt entry (and click on it to enlarge if necessary!). In particular, look at the child casually standing on the red table top and appearing to hold with her right hand a bunch of objects and, right at the top, another child balancing onto the whole affair on just one leg!

So... how did they do it? Well... if enough people request for it to be so, I'll post a couple of other photos tomorrow* that will show the clever idea behind the "magic". (Alternatively, I'll take silence on this matter to mean that people would prefer to not have the magic be lost by finding out how this "feat" gets enacted! :b )

Update: Since yesterday's "tomorrow" is now here, you can go here to see the inventive idea behind the magic. :)

I've always been fascinated by people who can balance like that. Great yake on the theme.

wow, that is an amazing act! i'd like to see the photos behind this act.:p

hmmm... from the show Magic's Biggest Secrets, there is truly always a way how magic is done he he

i have something in mind about this!

interesting subjects for the theme. it must be interesting to watch all these.

Great choice for this weeks theme. I cant help but wonder what the trick is, after all I can barely manage to balance on one foot on the ground.
I've been a bit lost in the past few weeks with our transition, but hopefully things will get back to normal soon. --Maya

I've always heard of Cheong Chau in those good old HK movies in the 90's but have never been there. Great shot and have a nice weekend. CY.
(Long time didnt participate in PH and I am back!)

never been here before... despite that i have been to HK 4 times

Very cool! I'd love to see more photos of this festival and the secret behind the magic.

A fascinating subject. I love your weekly glimpses into sides of Hong Kong I would never have known existed/ THanks!

this is so cool and amazing. love your take this week. i can't help wondering how they did it too.

Interesting ! I think I would fall if I tried to stand up like this !

Hi YTSL, wow very cool photos and creative take on this week. Sounds like a really fun festival. Okay, I clicked to enlarge and couldn't figure it out, so I would be very interested to see more photos to see how they do this.

What an interesting event. Please do show us how the magic is done. Your posts are always so much fun to read and look at.

I love the inside photo of th deities and community working for the festival but I am pretty amazed at the floating children I'd love to know more about how they do it.

Well... that girls had some help. So in this case, you can't give them all the credit for their balancing act... ;b

Yeah, I'd like to see that parade too. The problem is that the Cheung Chau Bun Festival sounds like a zoo in terms of its crowds. So have not gone and checked it out on the day itself yet!

Come back in about 24 hours and see if your guess was correct! ;b

Yes, it was -- and I also got to watch some people practicing the bun tower climb too. Very cool I thought! :)

Wonder... and then come to get the answer from this blog. (Yes, I'm going to put up an entry on it tomorrow. :))

Welcome back to Photo Hunting. Did you watch (and love) "Just One Look"? It's the movie that made me want to visit Cheung Chau... ;b

If it makes you feel better, I didn't visit Cheung Chau until around my 8th visit, I think. :)

Thanks for your "yes please" vote and I'm definitely going to take it -- and similar others -- into account. :)

Have to say that the sight of those two balancing girls temporarily stopped me in my tracks -- that's how amazing I found the sight. :)

You're very welcome -- and I'm glad to be able to show you sides of Hong Kong beyong the stereotypical and conventional. :)

If all goes as planned, you can wonder no more soon -- that is, if you visit again after I post the explanatory entry! ;b

We'd need some help -- like those girls in the photos had! ;b

I'm a bit wary of posting because it might cause the magic to dissipate. OTOH, since there are so many requests to do so... and come to think of it, I think people will appreciate the inventiveness and imagination behind the illusion. :)

Agreed re the meme and thanks for what I assume is a compliment about my entry! :)

To my mind, there are so many amazing aspects to the festival -- including its communal nature and the creative activities that are part of the festival. :)

Mine is standing here: http://www.slowtrav.com/blog/eden/

Good take on the theme! This was my first time participating in the Photohunt :)

Welcome to Photo Hunting, hope you've enjoyed your first try and will continue with this meme for some time. :)

There has to be some trick to it... they look too little to be practiced in such feats....

There definitely is a trick to it. Hope you'll return to check out my entry showing the trick. :)

Sounds like a great time - it is always cook reading your photo hunt posts because you give nice background detail behind the pics.

Have a great week.

I know the proverbial "they" say that a picture says a thousand words... but have to admit to feeling that often times my photos need some explanatory notes to help people appreciate them more! ;b