Musings on the (culturally) British side of me 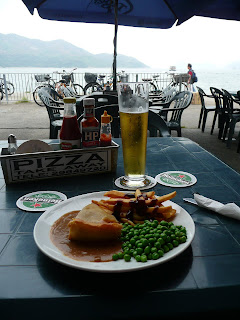 Yes, I enjoy eating pie, gravy, chips (with HP sauce
slathered on them) and peas at pubs -- and
feel the meal would be incomplete without a pint!
According to the proverbial "they", a rolling stone gathers no moss. But although I consider myself a rolling stone in many ways, I actually feel that the different places I've been to in the world all have left marks on me and -- particularly in the cases of those where I spent years living in -- contributed to the shaping of my personality and character.

Once upon a time, I was a socio-cultural anthropology student whose specialist areas included the study of ethnicity. (Indeed, I even once taught a 300-level university course on it!) So musing about cultural identity issues is not something that's completely alien to me.

Still, because the anthropological phase of my life was so long ago (to the extent that it can feel like another lifetime), it's not something that I've explicitly thought about for a while. But a remark by a friend earlier this week got me thinking of it once more. More specifically, he wondered how Malaysian I actually remain -- considering not only my years spent away from my native land but, also, the influences that the societies I've lived in (notably that of England, the USA, Tanzania and now also Hong Kong) have had on me.

My immediate reply to my friend's query was couched as a joke -- in that I told him that my love of food remains very Malaysian. (We were having the conversation over a meal.) But another conversation later in the week with a different friend hammered home the fact that unlike many other Malaysians, I am quite happy to go without Malaysian food for months at a time. (Put another way: I refuse to eat Malaysian food in Hong Kong because I just can't stomach the prices of Malaysian food outside of Malaysia and also because my experiences in places like England and the USA have me convinced that Malaysian food is truly only very good in Malaysia!)

Alternatively, the thought also has occurred to me this week, I find myself pining for English food and drink (more specifically, its beers -- ales and stouts) -- and doing what I can to satisfy those yearnings -- every place that I have lived! And especially when the weather turns cold, I actually seem to almost instinctively seek out nice warm pubs where I can find good beer served at room temperature and pub food (including Scotch eggs, all manner of pies and other kinds of food that feel perfect for helping warm as well as fill one up!).

Of course, if they have Arsenal match on TV, all the better! (Though to make me truly happy, the match had better see the Gunners winning comfortably!!) But, yes, I think my love of association football is another British cultural bequest -- though admittedly by way of Malaysia, since my earliest memories of watching Arsenal involve watching them on TV thousands of miles away from their North London home.

Other loves that I have to thank the British for: museums (because the first museums I was taken to as a child were in England); reading (not only is my favored reading language English but the first books I read were by English authors -- notably Enid Blyton!); hiking (since the first countryside tramps I took were in the English countryside); classical music (because the first classical music concerts I attended were in London); and theater-going (with my first theater-going experiences being to plays in London's West End).

In addition, strange as it may seem, I owe an interest in Japanese -- maybe even general world -- cinema to the British -- or, at least, my time spent in England. For it (also) was in the British capital many years ago that I got in a viewing of Akira Kurosawa's revelatory Ran -- the kind of film that exponentially expanded my ideas of what movies are and can be... and ditto, one could say, life in the bargain!

Thanks for letting me know you like this post. It's a somewhat unusual post for me -- revealing as is does more of me than Hong Kong. So was wondering if regular readers would get much out of it. :)