A by-the-numbers look at my 2010 movie viewing year 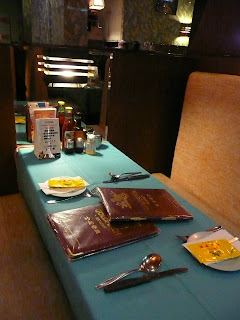 Life in Movie Mecca means being able to dine
in restaurants with movie associations
(in this case, In the Mood for Love and 2046)... 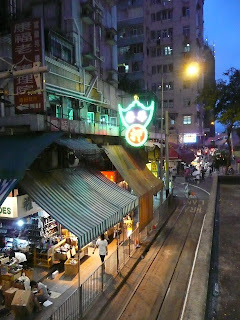 ...and it not being an accident that one can
recognize locales when viewing movies
(like Soi Cheang's Accident) as well as
getting to watch lots of movies in theaters :)
Time, now that we're almost a week into a new year, for the latest edition of a now annual series on this blog... (The first, second, third and fourth of which were for calendar years 2006, 2007, 2008 and 2009 respectively.) And yes, I do hope that you get something out of reading the list the way I get something out of creating it! :b

1 also -- The number of movies starring puppets I viewed in 2010 (and for the record, that would be Princess Hibiscus (Mainland China, 1957), which further has a distinction of being a puppet Chinese opera film!)

2 -- The number of films starring Brigitte Lin Ching-Hsia that I rewatched (both times on a big screen) this year in 2010 (And for those who wonder, they were Patrick Tam's Love Massacre and Tsui Hark's Zu: Warriors of the Magic Mountain)

10 -- The number of Japanese movies I viewed last year

16 -- The number of black-and-white films I viewed last year (including The White Ribbon (Germany-Austria, 2009))

1934 -- The original year of release of The Goddess (Mainland China), the oldest non-Hong Kong movie I viewed last year

1953 -- The original year of release of The Dawn of China's Revolution (AKA Blood Stained Flowers), the oldest Hong Kong movie I viewed in 2010

I love this list! (I may use your idea myself, wouldja mind?)

So seeing Vincent Zhao in 3-D was no big deal?

Once again, your list makes me extremely envious that I don't live in HK and also reminds me what a good idea it is to keep track of movies watched. I'm curious how my own film diet would break down into numbers.

I like the idea of keeping track of what I watched (and read) in a year - and I sort of do but in a rather haphazard manner :)

The suprising entry for me was The Girl With the Dragon Tatoo. I too liked the film and rate it high also as an adaptation (although the book, as usual, is much better) but never really thought you would. That'll show me not to underestimate your eclectic taste (still recovering from the shock of you mentioning In The Realm of the Senses) :)

Would it be too much to ask a review of it?

It being "The Girl With the Dragon Tatto!"

Glad you love the list and you're welcome to turn it into a meme. If you do though, would appreciate your linking back to me. Maybe some people might be inspired by our lists to write their own! :)

And yeah, sorry, seeing Vincent Zhao in 3D was no big deal... ;S

I actually thought 2010 wasn't movie-filled enough and in retrospect, think I got absorbed going to classical music concerts and other live performances at the expense of some movies. But am thinking I might head back to watching more movies in 2011... ;b

Hmmm... don't feel qualified to write a review of "The Girl with the Dragon Tattoo" -- especially since I haven't read the book! Will say though that I liked how unconventional it was -- and felt that "The Girl who Played with Fire" was more conventional and predictable and thus not as good. Still, am definitely looking forward to viewing "The Girl who Kicked the Hornet's Next" -- coming out in Hong Kong cinemas next week. :)

You really have taken advantage of Hong Kong as movie mecca land! Wow, I'm impressed with your extensive list of movies you've seen this past year and not just from Hong Kong but all over the world.

What a wonderful idea, YTSL. I wish I thought of it! Who doesn't love a list? =)

Great post. So much fun to read and try to relate to. I also keep track of the HK films I watch and collect.

I hope you wouldn't mind if I tried out a similar list in he future? I will most definitely link to your blog. I love it =)

Yeah, I expected I'd get to see a lot of Hong Kong movies in Hong Kong that don't get shown elsewhere in the world but the bonus has been getting to see lots of movies from elsewhere too. For while the HK International Film Festival is the biggie, there really are lots of international/foreign film programs throughout the year here.

Now if only the Hong Kong Film Archive had English subtitles for more of their older films, my joy would really be overwhelming. :)