Revealed: the inventive trick behind the balancing 'magic'! 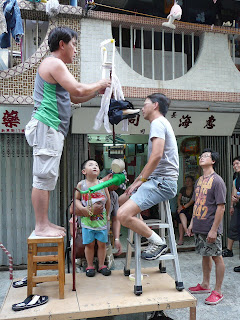 Two men at work in a Cheung Chau street
while a boy watches and waits... 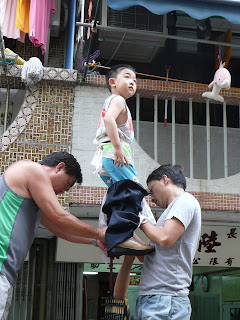 ...to get 'dressed' and thereby prepared
to take part in the 'balancing' act
featured in the parade of the 'floating' children
In my previous blog entry (one with Standing as its theme for the Photo Hunt meme established by tnchick that I take part in on Saturdays), I put up a photo of two young Cheung Chau residents who appeared in the midst of enacting an amazing balancing act -- and promised to put up an entry showing how it was done if enough people asked.

So here it is -- and please don't get upset if the magic now feels gone... this not least because I honestly like finding out how creative and inventive is the trickery behind the 'balancing' and 'floating'! Also, to put things into context: the fact that the people in the photos were so open about what they were doing -- working as they did in the middle of a street in Cheung Chau's main town -- makes me have fewer qualms than I otherwise would about putting up the revelatory photographs.

More re the photos: Those who are wondering how come the store fronts open right on to the street might like to know that Cheung Chau is one of Hong Kong's many car-free islands. Also,, those whose attention were drawn to the dolphin plushie apparently floating in mid-air should know that it actually was suspended on a washing line along with other more conventional items being hung out to dry that day by the people living above the buildings' ground floor shops. :D

how long did the boy stand?

Hmm, I would love to see this someday, I can't quite imagine it, even with the pictures.

I loved the fact that there were no cars on Cheung Chau. There were still vehicles to watch out for but it was a nice respite from the big city traffic in Hong Kong (and NYC for that matter).

Hi YTSL, so that's how they did it. Very cool and clever. Thanks so much for taking the time to share these photos. It really does sound and look like a wonderful festival.

Thanks so much and have a great evening.

amazing!
and even if one knows how it is done if not done correctly it is of no use!

Re the particular boy: I don't know -- but definitely longer than I watched that whole process that he was involved in!

What can't you quite imagine? How they do it or the parade itself? If the latter, here's a video clip that may give you a better idea (particularly from the 3.21 min mark):-
http://www.youtube.com/watch?v=ajQoGxqcaRg&feature=related

Glad you returned to have a look at this blog entry. :)

And yes, you're correct -- even if there's no magic, there's still something amazing going on there! :)

Thanks for the photos. Very very cool!

You're welcome -- and am glad there were people (you included) who wanted to see them! :)