A by-the-numbers look at my 2008 movie viewing year 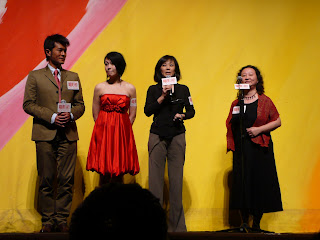 Louis Koo, Rene Liu, Sylvia Chang and an interpreter
at one of the Hong Kong International Film Festival
screenings I attended in 2008 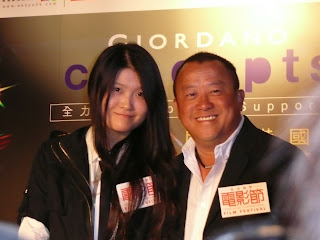 High Noon (2008) director Heiward Mak
poses with the film's producer, Eric Tsang,
just before another HKIFF screening
2 - The total number of Malaysian movies I watched in last year (i.e., Days of Turquoise Sky (AKA Kurus) (2008) and Sell Out! (2008))

2 too! - The total number of films viewed outside of Hong Kong (one in Malaysia and the other on board a plane!)

4 - The number of Hong Kong films viewed at film festivals (i.e., the Hong Kong International Film Festival last spring and Hong Kong Asian Independent Film Festival a few months ago) that still have yet to get a theatrical release in Hong Kong (with the films being: All's Right In the World, Citizen King, Magazine Gap Road, and Three Narrow Gates)

18 also - The number of different countries whose movies I saw last year (For the record, they are: Australia, Brazil, Britain, China, the Czech Republic, France, Germany, Japan, Kazakhstan, Malaysia, Mongolia, Russia (including the then U.S.S.R.), Singapore, South Korea, Taiwan, Thailand, Turkey, and the U.S.A.)

22 - The number of Hollywood movies I viewed last year

1948 - The original year of release of the oldest Hong Kong-related film (*Hong Kong-related because its director, Zhu Shilin, moved to Hong Kong from Mainland China where he made the film, Sorrows of the Forbidden City)

Wow! That's a lot of movies. I'll have to try to look into seeing some of those ones you rated so highly.

You know something sad? The number of movies I saw in the theater this year? 0. I'm going to try to beat that number in 2009.

Nice post. I never count that stuff. Maybe I should?

I then watched the director's follow-up Fires on the Plain which is similar subject matter but far, far more depressing and soul-crushing. It could very well be one of the most depressing things I've ever seen.

Is the musical The Eternal Love a Shaw Brothers? Not the Love Eterne right? I should go look it up.

Awesome post. I obsessively count and keep track of where, what and when I watch something. (Yes, I have a spreadsheet!) Glad to see I'm not the only one!

Many of the movies I rate highly should be easy to find on DVD. Unfortunately, however, quite a few of the older Hong Kong movies actually are not available on video.

I don't usually think of myself as a numbers obsessed person but I remember not daring to review a Hong Kong movie until I had seen at least 100 of them as an adult... ;)

And yes, I saw "The Burmese Harp" for the first time last year. Re "Fire of the Plains": It screened twice as part of that Kon Ichikawa program -- but both times, immediately after "The Burmese Harp" and I've learnt from past viewing experiences that I need some time to absorb, deal with the impact of great, emotionally-impacting films...

Yay, I'm not alone in my movie tracking habits! Good to know! :)

I kept track of my movies in 2008 - I watched a total of 86; 4 of which were caught in the theater - Enchanted, Forbidden Kingdom, Wall-E, Quantum of Solace. And, coincidentally, I read the same number of books.

Wow, only 4 movies viewed in theatres? Of those four, I've only seen "Wall-E"! And although I keep a record of movies viewed, I don't keep a records of (number of) books read, so have no idea how many that is!