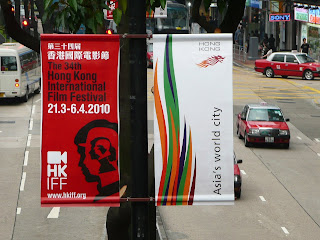 A sign of how fast things change in Hong Kong --
since those banners were put up,
Brand HK has controversially changed its design
As the proverbial "they" say, all good things must come to an end. And so, at the beginning of this week, I attended my final two screenings of the 34th Hong Kong International Film Festival -- at least of the official period since I have tickets for one screening later this month of a Yasujiro Shimazu film as well as to the Patrick Lung Kong retrospective at the Hong Kong Film Archive that actually goes on through to next month.

To be honest, I'm not sure whether I'll be writing up reviews of those latter films -- or that of Dante Lam's Fire of Conscience (which I saw this past Thursday outside of the film festival). But, for sure, here in this entry are reviews of two films I saw this Monday that brought my personal HKIFF-ing to a satisfying end this year:-

As I prepared to go view this film whose three leads (82-year-old Lisa Lu, 72-year-old Ling Feng and 76-year-old Ma Xiaoqing) have a combined age of 230 years, I got to thinking how, while I had felt as well as thought many things thus far at the HKIFF, I actually hadn't encountered a genuine tearjerker at the fest.

And with Lisa Lu conveying a sense of restraint early on in this drama about a woman who was left behind in Mainland China in her first year of marriage while her husband went off to what he thought would be a temporary exile in Taiwan, only for more than 50 years to elapse before they would meet again in Shanghai, I wondered if this work would go for the emotionally reined-in path in its treatment of an inevitably emotional story (not least because it has many real-life parallels).

But before the half way mark, I got all choked up and found tears coursing down my cheeks when her character disclosed at a family gathering that for the past 50 years or so, she had felt that she had lived for her family but now that she had reached an age where she would have just a few years left on earth, she wanted to live for herself -- by going off to Taiwan and spending the rest of her days with her first -- and, it went without saying, true -- love. And by the same token, I was so very shocked when one of her children reacted vehemently to her mother's words -- and re-positioned them as a betrayal of the family and, in particular, the man who Lisa Lu's character acknowledged had saved her, including from a suicidal attempt during the Cultural Revolution, and given her reasons to continue living.

At the same time as I was reacting in an emotional manner to the film's proceedings, however, I also got to intellectually realizing that the work's presentation of different views about the elderly woman's situation and planned decision is what makes it rise so many others with similar subject matter and themes. For in steering a path between the romantic and pragmatic (along with one that shows how one really can't have it all), Wang Quanan has come up with a truly moving but also thought-provoking and thoughtful meditation for the ages about how love counts for a lot but cannot and doesn't conquer all because other factors -- and people -- need to be considered too in real life.

This 1968 film's two Patricks -- whose most famous collaborative effort was the previous year's Story of a Discharged Prisoner -- do double duty (with Tse Yin producing the movie as well as being it lead actor, and Lung Kong having a supporting actor role as well as directing the work) in this drama about a pickpocket who develops a guilty conscience after he inadvertently causes the death of the father of a blind girl.

And even while Patrick Tse Yin exudes charisma and star power in his role as the criminal who decides to reform and become a better man, he's also very generous in allowing the movie's female lead, Josephine Siao Fong Fong, to shine so very brightly as a young woman will ill luck for the most part but also the good fortune to have good people (including a maternal neighbor along with her father) bestow her with care and love.

As with Prince of Broadcasters (which I viewed one day before the HKIFF's official opening day), Patrick Lung Kong has managed to successfully marry a melodramatic romantic tale with a social drama -- or, at least, infused what might otherwise have been your standard (and probably even tired by the late 1960s) melodrama with insights into then contemporary Hong Kong society, particularly those disaffected youth living on its fringes (but, as he attempted to show in this film) but definitely not beyond redemption.

On a somewhat quibbling note, I wish Patrick Tse Yin's character had been more sensitive and also imaginative in describing things he saw for the blind individual he came to care for deeply using ways and words other than those related to color. Also, sad but true: some of the movie's melodramatic moments really can be too over-the-top for our cynical age -- to the extent that it drew laughter from some members of the audience at the screening that I attended.

Still, rest assured that such concerns definitely did not stand in the way of this turning out to be the second movie viewed in a day that got me all weepy. Indeed, I got so sniffy at certain points of this work that my strong advise to those who read this review is that if you ever get a chance to watch it is: make sure you bring tissues -- because chances are that you're going to need them!

I'll definitely keep my eye out for Apart Together. It sounds like a really great film and a chance to see Lisa Lu in a substantial lead role.

And I sure would love to see The Window again.

Hope you get a chance to see "Apart Together". And am glad you saw "The Window" and liked it. :)

I came to know the film The Window but never able to get it loaded in Youtube or get a DVD ; is there any way you can help where i can find this movie ? i am in Vancouver,Canada

I'm glad to see your interest in seeing "The Window' but I'm afraid I can't help you. I don't use Youtube to view movies and don't think there's a DVD available of "The Window". Your best bet with regards to this film probably is to check the HK Film Archive and HK International Film Festival programmes and come over here to Hong Kong to view them should it be re-screened again.

thanks i am a Fong Fong fan, especially love her with Tse Yin. Can you possibly give me the address for H K Film Archive or its link. I hope to contact them..thanks again

Here's the link to the HK Film Archive:-
http://www.lcsd.gov.hk/CE/CulturalService/HKFA/index.php

And click on one of the three language options you have -- English, traditional Chinese and simplified Chinese. :)