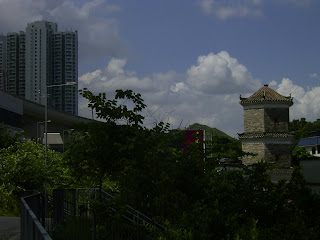 Back when Mimi Private Eye was filmed,
the pagoda in the picture stood amidst rural greenery
Last week, I forewent my usual Sunday hiking to have lunch with two fellow film fans (at the Cafe de Goldfinch that has a special place in the hearts of Hong Kong movie lovers on account of it figuring in Wong Kar Wai's In the Mood for Love and 2046) and then a viewing of yet another movie in the Hong Kong Film Archive's ongoing Patrick Lung Kong retrospective program. And while I usually get a lot out of my Hong Kong hikes, it's also true enough that the day turned out to be a very enjoyable Sunday indeed -- thanks in no small part to the fun company of my two friends for part of it and the big screening viewing of the 45-year-old movie whose review now follows:-

Like Pink Tears, this entertaining offering which revolves around a female teenager with a passion for reading crime novels who, along with her photography-obsessed elder brother, gets embroiled in a murder investigation dates back to 1965 and is directed by Chun Kim rather than Patrick Lung Kung (who, instead, served as assistant director as well as co-scripted the work with its primary helmer and plays a significant role in front of the camera for the film).

But unlike the romantic melodrama that had Julie Yeh Feng as its star, this movie which has Jeanette Lin Tsui playing its eponymous character is actually an unusual combo of crime film and comedy. Additionally, unlike Pink Tears, it is neither a Shaw Brothers production nor -- and I think this speaks to the Shaw Brothers movies having had a higher budget than most other Hong Kong cinematic efforts from the same era -- is it filmed in color.

But as Hong Kong movies have shown time and time again, a lower budget work is not necessarily a lower quality nor less enjoyable effort. And this especially when the filmmakers have charismatic stars like Jeanette Lin Tsui and Kenneth Tsang to work with -- and these two talented thespians proceed to work well together as well as play their roles with so much zest and generally help to invest the movie with large doses of good fun along with youthful energy.

On a more critical note: when watching a movie like this, I sometimes am moved to wonder whether people really were more naive and innocent back then. To be sure, there are times when certain characters' lack of guile can be endearing and part of the work's nostalgic charm. But at other times, they -- and the movie with them -- can seem to cross the line and just seem plain dumb.

Still, I don't want to sound a too negative note about the work because I do think it continues to be a good watch so many years after it was first made. To be sure, something that I consider a major plus in its favor is that while too many films start with a bang but then end with a whimper, drag on too long and consequently overstay their welcome or just plain conclude in a generally unsatisfactory manner, this movie's last 10 minutes or so may well be its best.

At the very least, its climactic chase sequence is noteworthy in its ability to seamlessly go back and forth between nail-biting suspense and guffaw-inducing slapstick. And it's an added bonus for people like me who love recognizing real-life Hong Kong locations in the territory's movies -- as well as have a general passion for Hong Kong cinema -- that it managed to include the Tsui Sing Lau Pagoda (AKA Pagoda of Gathering Stars) that is Hong Kong's sole surviving ancient pagoda into the picture! :)

This is one that I really wanted to see, especially since it's one of the few films that Lin Tsui and Kenneth Tsang -- real-life siblings -- made together.

Something else that makes this film unique, which I just found out: it's only one of two films that Lin Tsui and director Chun Kim made together. As you probably know, they were married in real life, until it came to an unpleasant end. The other film that they made together was Lin Tsui's 1954 debut Sweet Seventeen.

Thanks for those factoids!

While watching the movie, I got to remembering that Kenneth Tsang had a famous actress sibling who had passed away but couldn't recall who exactly it was... BTW, it's interesting that in the movie, he plays her elder brother when, in fact, he's actually younger than her.

And I actually didn't know until I read your comments that Lin Tsui and Chun Kim had been married! And yeah, so sad that it came to such an unpleasant end. (Yeah, I researched further about it...)