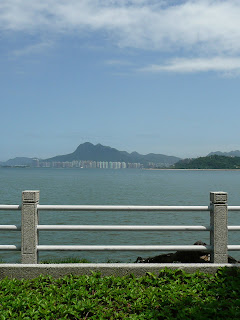 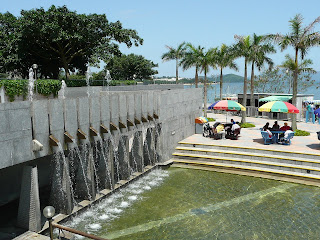 A small section of the 22 hectare
Tai Po Waterfront Park

Last night, I watched a psychedelic animated movie called Sita Sings the Blues (which I will not be reviewing because there are plenty of readable reviews available of Nina Paley's 2008 film already. Also, its main maker has made it free to watch online here -- so you can easily judge this creative offering for yourself.)

I will share here though that chief among the things I like about this movie are the blues tunes that feature in it. And what with this being one of those weeks that have had its share of negative incidents as well as more enjoyable moments, the number entitled -- and containing the lyrics -- "If you want the rainbow, you must have the rain" (sung, like many of the other songs in the movie, by the late Annette Hanshaw) really spoke to me when I heard it -- and again earlier today.

A little bit of context with regards to the latter: I have the kind of job whereby deadlines come quickly one after the other. So once I get to the office, I pretty much have my nose to the grindstone until the end of the work day -- with the notable exception of my lunch hour... which I make a point of taking away from my desk and usually in the company of friendly colleagues.

As luck would have it though, none of my usual lunch companions were about today. But rather than give in and do such as eat alone at my desk, I bought a sandwich and bottle of juice and then carted them and myself away to a nearby park to eat outdoors.

And as luck would have it (and this time it actually was good), it turned out to be a beautiful time of the day -- one during which I was able to breathe in clear air and view blue skies over Hong Kong (in stark contrast to that widely-reported super high pollution day last month) and so many other beautiful sights! Consequently, my mood lifted quite a bit and I wasn't only able to enjoy my lunch time but also go back to work afterwards feeling considerable refreshed.

So yes, indeedy, with regards to knowing full well that life invariably has its ups as well as downs. And, also, it being so that even while, into every life, some rain must fall (as the proverbial "they" say), the rain does sometimes also pave the way for a beautiful rainbow's appearance! :)

Glad you found your rainbow today! That's a wonderful song and video. I'll definitely watch the entirety of Sita Sings the Blues within the next couple of days.

The Tai Po Waterfront Park looks lovely. I was wondering if you've been to the Insect House. I do love insects. Is it worth visiting?

What a lovely park! Hong Kong seems to have done a lot with its harbor/oceanfront and it would be a real plus to have such a nice place within easy walking distance.

The New York Times article on desertification is horrible--not the article but the way the desert is steadily advancing into what was grasslands. Much like what happened in the Sahel region of Africa as the Sahara advanced southward.

Let me know what you think of the movie after you view it! And sorry, haven't been to the Tai Po Waterfront Park's Insect House yet -- but if you ever visit Penang (again), I'd highly recommend the Butterfly Farm there which also has its share of other insects (though those, unlike the free-flying butterflies, are in glass cases for the most part). :)

Actually, many people think that Hong Kong could do far more with its harbour and ocean fronts. But if you look, you will find good stuff. :)

On a more sober note: yeah, I had similar thoughts as you when I read that article. Also, have you read about how it used to be that the Sahara was green?

YTSL, I did visit the Butterfly Farm when I was in Penang and really loved it. (And was glad that those other insects were under glass and not roaming around!)

I think I'll try to visit the Insect House on my next trip to HK, not only for the bugs but also to check out Tai Po, which I've never been to.

Glad to learn that you did visit the Penang Butterfly Farm -- and enjoy your time there. :)

As for Tai Po: I myself am guilty of not exploring it as thoroughly as I should -- but if nothing else, its main area is worth visiting for the food!!! :b

Good post this one! And I see u have lots of patience taking these pics :)

Thanks -- but with regards to the pics, I have to credit serendipity and good fortune more than patience! :)