The last but two movies I viewed at the 2010 HKIFF 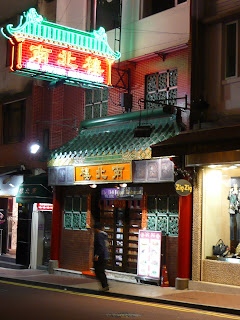 A restaurant I ate in a couple times
without realizing that it's the supposed location
of the villain's lair in The Game of Death!
The Hong Kong International Film Festival officially ended yesterday -- but the reviewing of films I saw at the fest go on (along with some programmes like the tribute Yasujiro Shimazu: Fanfare for the Common Man and Hong Kong Film Archive's Hong Kong Auteur, Lung Kong; some of whose future screenings I have tickets for). And, without further ado, here is my personal take on two more movies I caught at this year's HKIFF:-

As some of you will know, I'm a Malaysian who lived and worked for a couple of years in Tanzania. Alternatively put in Kiswahili -- a language I learnt for two years before my second visit to that East African country: Nilikaa Tanzania kwa mwaka mbili kwa kufanya utafiti. So when I saw that this year's HKIFF offerings included a film made by a Malaysian that was set in Dar es Salaam (the sprawling city where -- along with Zanzibar Stone Town -- I spent the majority of my time in Tanzania), I couldn't resist the impulse to check it out.

For, even while I didn't have high expectations for the work as a cinematic product, I figured that it would satisfy my urge to get a good view of what Dar es Salaam (the Haven of Peace) looked like these days -- one that would allow me to compare and contrast the city and its people circa 2010 with when I lived there (more than a decade ago now). Except the way that the film was shot (and here, I'll point out that helmer Sherman Ong also is the work's credited cinematographer), I found to my utter disappointment that I couldn't even really do much of that.

For one thing, an inordinate amount of the work's proceedings take place in a cemetery (somewhat understandably because its main plot concerns an unemployed graduate going to Tanzania to search for his mother's grave) or indoors, primarily in a canteen type establishment (where the man and another who he met early on in Dar es Salaam and enlisted to help him in his search go to eat at least once, and a couple of sub-plots involving the canteen's cook, a grave digger and a scrap metal scavenger who source of scrap metal includes metal crosses of new graves).

For another, up until the very last car journey that takes place as the end credits roll, ventures beyond often are shot in such as a way as to mask locales -- maybe because, as I myself experienced, many Tanzanians are loathe to be photographed -- because, more than one person has told me, they associate being photographed with animals and Maasai tribesmen encountered on tourist safaris -- and consider it a matter of national security to ensure that such as railway stations, airports and electric power plants not be recorded on film.

In any event, and for whatever reason, the end product is a film that's boring because stories don't really develop and ultimately come to nought, and characters just aren't fleshed enough to be all that interesting, never mind sympathetic and understandable. Indeed, pretty much all that I came out of the viewing with is a sense of ennui -- on the part of the film's Tanzanian characters (some of whom did remind me of certain people I met during my time in the country) but also for my own part post viewing 86 minutes of what may well have been the worst film of this year's HKIFF.

My rating for the film: 2

Released five years after its top billed star's death and using footage he had shot for what would have been his real film but also coverage of his real-life funeral(!), this Golden Harvest production is considered even by unabashed fan boys as "a cheap bastardization of [Bruce] Lee's work" and "a hack job". And although a worded caveat along the lines of "any resemblance to real persons is entirely coincidental" flashes onto the screen early on, things are made even more questionable by there being little question that viewers are meant to think that its action star protagonist (who is named Billy Lo but is shown filming a scene that's straight out of Fist of Fury, among other things) is based on Bruce Lee.

All in all, there are so many things that are just plain wrong with this movie -- and I don't just mean the absurdity that comes from watching the Hong Kong (rather than international) version of this film meaning that there are situations in which non-Hong Kong characters are seen speaking Cantonese (rather than, say, English) to one another -- even when not a single Hong Konger is present!! (On a Hong Kong movie location note, it truly does seem stupid that Billy Lo that would arrange to have a secret meeting with somebody at a place (the Po Leung Kuk orphanage in Causeway Bay) just a few minutes' walk away from the villain's lair (which I observed, to my great amusement, is supposed to be the Red Pepper restaurant that I've eaten at a few times in the past)!!!)

Additionally, although this film's non Bruce Lee action are supposed to have been choreographed by the great Sammo Hung, they often don't seem very polished. What's worse, those that involve Billy Lo when he is played by others sometimes have him fighting in ways that just don't capture the spirit and style of the legendary Little Dragon -- something that becomes patently apparent once we're shown footage of the real Bruce Lee going at it against first Dan Inosanto and then Kareem Abdul Jabbar (both of whom were his real life students).

If truth be told, for this viewer, all that genuinely matters is what ensued in the limited time that the real Bruce Lee appears on screen -- precious time during which the film's audience is treated to a masterclass in kung fu fighting (along with kung fu fighting filming). For it truly is no exaggeration to state that the man really did move in ways that were jaw-droppingly amazing.

At the risk of repeating myself, it's not just that he moved with pace or power but that he simultaneously did both. Something else that left a strong impression on me is the brutality of his fighting style. Put another way: this was a man whose characters had few qualms about killing the bad guys in any way that he could -- including strangulation as well as causing internal injuries -- but also directly attacking them where it would most hurt. Yet even while the fighting style may have been considered dirty as well as animal-like, there was a righteousness to his character and stance. And that, I believe, is a major factor as to why Bruce Lee remains admired and looked up to by a whole host of different and diverse people many years and even decades after his untimely death, and to this day.

My rating for the film: 7

there is one scene in the film when a paper cut out (yes, you read that correctly) of BL's head was used. But anyway, seems as though the film may be worth watching again for the sake of some 1978 HK (and Macau) scenery. Phil

Firstly, have to tell you that for sometime, your pseudonym got me thinking you were female... but Phil sounds more masculine (though, of course, it could be short for Philomena... ;b).

Re "Game of Death": I had read about that paper cut out but have to admit that I actually didn't notice it during my screening! ;S

aha, the name thing worked for a while then. Yes, actually, it's short for Philippa...nah just kidding. hehe

Anyway, I believe it is a scene when 'Bruce' is sitting down and his antagonist places a walking stick on his shoulder (if my memory hasn't let me down - I haven't watched it for nigh on 20 years) shortly after the stage light has crashed into the set.
Best, Philomena

The scene you described occurred really early in the movie. Guess I still was getting used to all those weird cuts between footage involving the real Bruce Lee and footage with Bruce Lee impersonators to be all that observant... ;S