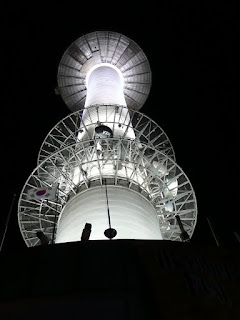 The 236.7 meter N Seoul Tower on Namsan
(South Hill) in its night-time glory 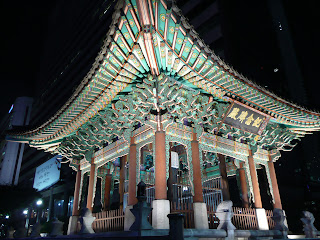 A more traditional structure in central Seoul
is well-lit to show off its beauty too
As those who have seen my latest blog posts know full well, I recently was on vacation in South Korea. The more eagle eyed visitors also will have noticed that this recent visit was not my first to the Land of the Morning Calm.

For the record, I first visited Seoul back in the winter of 1982. Things were so different then -- not only was I a good deal younger but Korea was still under a nation-wide curfew originally imposed by American occupation troops at the end of the Second World War.

Somewhat understandably given the circumstances, my prevailing memories of the place involved it being super cold and with a feel and look that was more gray than colorful. Indeed, even now, I remember how when the group I was with ventured out from the hotel on our first evening in Korea, we saw few people out and about and more commercial establishments already closed for the night than open.

Fast forward to October 2009 and what a different picture gets presented! Though even on this recent visit, I noticed that not all is completely well yet in the Korean nation... (For one thing, there's all that military stuff in the DMZ. For another, my mother and I saw and encountered a shockingly large number of homeless men in central Seoul, including in an underpass right next to the Seoul Metropolitan Council building.)

On a more positive note: these days, there seem to be real efforts to encourage people to go out and enjoy Seoul at night -- with such as lots of excellent lighting about and outdoor evening events and activities taking place (including at least two concerts -- at least one of which was free to the public -- within walking distance of our hotel). And I definitely can bear witness to Sunday evenings up on Namsan serving up fun for family groups, some of them tri-generational, along with wonderfully cool air and pleasant fall sights. :)

wow, you went to korea in 1982!!! It must have been quite novel to sightsee there then given korea really hasn't been a popular tourist destination until the past 8-9 years.
Also, u'm surprised about the homeless men situation in seoul..like how many were there, 10,20,30? Hhmmmm, it seems maybe korea still has some improvement to go before becoming a fully-fledged developed nation.

Yes, well, 1982 was around the time that Dr Mahathir initiated his "Look East" policy. So I thought it'd be cool to check out a couple of East Asian countries in South Korea and Japan... ;)

As for the homeless men situation in contemporary Seoul: Let's just say that I saw some every night bar the first one that I was in Korea -- and my mother took to refusing to go into underpasses as a result of the many homeless men we saw there. :S