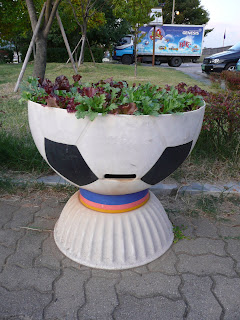 Alien, football (AKA soccer) creature,
over-sized flower pot or
all of the above in Suwon town?!
Many moons ago, I mentioned in a meme entry on this blog that my ethnicity and/or nationality often has been mis-identified in many parts of the world. Well, now one can add South Korea to the list -- in that during my recent visit, I found that I apparently look Korean to Koreans! Indeed, so much of a native did I look there that people would come up to my mother -- who met up with me in Seoul a day into my Korean vacation -- and I to ask us for what appeared to be directions as well as just plain assume that we could speak Korean pretty much wherever we went in the country!

What accounted for this state of affairs? Is it, I wonder, because we often walked around without maps or guidebooks in our hands, yet seem to know where we are going? (A "trick" I learned from travelling and living in parts of the world where obviously being foreign or unsure of where one is (going) might expose one to crime.)

If so, why is it that in Beijing, my mother and I stuck out like sore, foreign thumbs even when we weren't speaking? (For the record, we were often mistaken there for Japanese, Taiwanese or Americans!) And then there was the assumption by most Taiwanese we encountered in Taipei that we were not only foreign but specifically Japanese! (And should anyone wonder, in Japan, I often get assumed to be Japanese -- or a Japanese-speaker at the very least...)

Actually, I do have a couple of theories as to why my mother and I obviously don't look like Beijingers: the first being that the ethnic Chinese parts of us are southern rather than northern Chinese; and secondly, that our clothing styles just aren't very Beijing or Mainland Chinese. But whither, then, the Korean and Japanese mistaken identities as, from what I can observe, I definitely tend to dress more casually and less smartly -- especially when on vacation -- than your average Korean or Japanese?

Whatever the reason, I have to say that there often are advantages to being mistaken for a native. Now if only I could be more polyglot and be able to speak the (dominant) language of more of the countries where I've been... and while I'm doing a bit of wishing, being able to read non-Roman alphabetic scripts would be cool too! ;b

I can't imagine the picture is anything other than an alien artifact from an advanced football playing race from another planet.

An ongoing and intriguing phenomenon. Why wife, whose French does not sound like the French spoken in any place where it is the native or main adopted tongue has been assumed to be a native or at least a French speaker in Quebec, which has been very handy in some parts of La Belle Province. A good friend who is as enthnically Korean as one can be but is culturally Ameican (adopted from a Korean orphanage as an infant, raised in Iowa) is assumed to be American or Canadian when in Korea, Korean in Japan (not always a good thing, she says) and Japanese in other parts of East Asia.

I am always taken as a dumb American trying to stumble through the day in the language the area where I am.

There's a test online where you are asked to identify the ethnicity of 100 Asian faces. None are of mixed ethnicity. Unfortunately, you need to register now to take it, but the whole point of the test is that within Asian ethnic groups there is a wide range of looks with overlapping boundaries. It's a fun test, especially if you mistakenly think, like I did, that you are pretty good at guessing someone's ethnicity.

As for me, I was mistaken for being a local when I was in Buenos Aires, and twice when I was in Indonesia I was asked if I was Iranian.

Finally, the one place where I really wished I could read non-Romanized script was in Taiwan. After being used to the romanized Chinese street names in Hong Kong, it was quite a challenge to navigate Taipei.

the football looks alien, yes, I don't think I like it at all but I'm football/soccer fans will feel differently

it's true, people are more likely to judge someone base on looks and I think in your case, it's quite interesting, wouldn't it be nice if we can all speak a different language that are tailor to the people speaking to us? of cause, that's just dreaming...

I so enjoy your tales of where people in different countries think you're from....

Once in London at an Antique Fair a woman asked me where in Ireland I was from-that was before she heard me speak.

And only once have I been in New York City when someone didn't ask me for directions. Friends (from NYC) say this not because I look/act like I live there but I look like I might help them which of course I do if I can..

A few years ago I did a similar online test and like you mistakenly thought I was pretty good and didn't score all that well. I learned not to 'assume' the backgrounds of people I met.

I also took a similar test--I think your could see 15 pictures at a time. I did so badly on the first take that I just chose the "a" selection on the second try and did slightly better.

A friend from Taiwan, a very decent guy, when I told him about it said something like, "Yeah, most people are pretty clueless--now, I on the other hand..." and proceeded to do about as well as I had.

Teeheehee re your reaction to the photo! :D


Also re it being so that you're "always taken as a dumb American..." -- really, truly?! This especially since your online persona makes me think that: a) you are far from dumb; and b) an uncommonly open-minded American! :)

It's not just Asian. Like I've told people before, I've been mistaken for a Native American (Navajo by Hopi, Hopi by Utes, Cochiti by Cochiti, etc.!), Welshwoman (by an Englishwoman!) and Tanzanian (by a Zambian) as well! :O

And yeah, know what you mean about Taiwan. From its politics, etc., had been expecting it to be more... well, Americanized! :D

And to add to things: just this morning, on the MTR, I got mistaken for a Mandarin-speaking Hong Konger by Mainland Chinese visitors. How wrong they were, alas! ;D

Now you've got me curious: do you have any Irish ancestry? :D

Know the test you guys are all referring to. Took it too without much success.

And my mother and I were playing a similar kind of ID game while on trains in Seoul -- i.e., seeing who looks stereotypically Korean and who didn't... ;D

Hm, I'm pretty sure I always look like I don't belong in whatever foreign land I find myself. An alien. ;D

Something I've noticed - you can tell which group are the Koreans by a certain pattern of plaid textile on the men's garments.

If you're an alien, do you look anything like the thing in my photo? Hope not! ;b

And hmmm re the plaid: I vote for bowl-style hair cuts and super shiny suits, myself! :D