A friend in Hong Kong and Hello Kitty 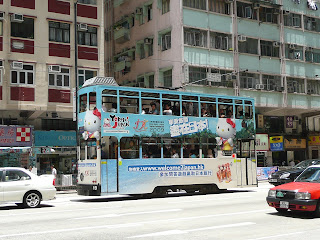 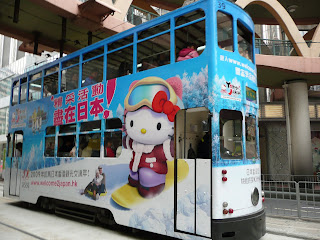 One of its predecessors from earlier still this year
A good part of this weekend which is fast coming to an end has been spent culture-vulturing as per usual. Quite a bit of time also has been spent resting from exertions at work this past week (where I've been working longer hours than usual to prepare for an upcoming vacation) and preparing for that holiday away from Hong Kong.

Amidst it all, I've additionally spent some quality time with a good friend who, after slightly over seven years spent working and living in the territory, has been recalled to company headquarters back in her and her company's European homeland. An uncommon expatriate who has come to love Hong Kong, one of the things she takes as consolation from having to leave the place is that she will have gained permanent residency status in her adopted home by the time she heads back to her native land.

A table-tennis enthusiast before she came to the Big Lychee, she also now leaves it with a distinct fondness for Chinese desserts and certificates attesting to her having reached instructor level in a couple of tai chi disciplines! Still, the moment which may well have confirmed to her and others that she had really become a Hong Konger was when she experienced sudden urges during this summer's McDonalds' Hello Kitty promotion to get herself a couple of Hello Kitty plushes!!

Speaking of summer and Kitty Chan... the long, super hot summer here in Hong Kong may finally be coming to an end. (Talk about it being long overdue: the Mid-Autumn Festival was celebrated last weekend, after all!) In celebration of that (and in honor of my good friend who *sob* also will soon be going away), here's sharing a summer (holiday)-themed Hello Kitty photo -- and throwing in another cute cat visual from last winter for good measure! ;b

Sorry to hear that your friend's leaving HK, but now you have a excellent reason for visiting Europe on a future holiday!

True enough. My friend and I already have been talking of holidaying together in Europe even as she also has made plans (booked flights, even) to return to Hong Kong in the near future! :)